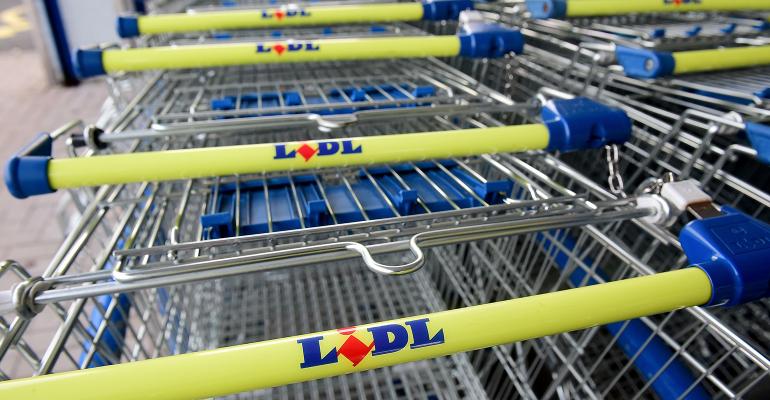 Granite countertops in the retail kitchen If I’ve learned anything from watching 10 billion episodes of HGTV’s “House Hunters” program, it’s that in real estate, compromise is inevitable. That, and the value of investing in granite countertops before you sell.

So it was not at all surprising to have learned this week that Lidl, which has been hunting for homes in saturated markets along the East Coast for the last few years, has, in the opinion of some experts, made a few compromises of its own on the spaces they intend to move into. According to sources, at least some of the 233 locations the German discounter has secured — including what they believe to be many of the earliest acquired and presumed first ones to open — have less-than-ideal site characteristics. They’re located on mid-blocks or on secondary street corners near but not quite at those locations easiest for shoppers to get to and from.

Like everyone else, I’ve been following the progress of Lidl closely and can attest to that point in a few of the places it reportedly intends to occupy that I happen to know well. Reports last fall indicate for example, they’re building at the site of a batting cage facility my softball team used to tune up for the season in Newark, Del. That’s a bunt single from some nearby residential neighborhoods but a home run from the highly trafficked corners from which they’d drive. And in Cecil County, Md., where I worked my first newspaper job — and where one of Lidl’s planned distribution centers has been celebrated for its economic impact — a planned store site in Elkton faces a ton of traffic on Route 40 but I can attest it would be convenient to visit only if you happened to be traveling west to east. For everyone else, there’s easier access to a gigantic Walmart and an Acme facing off at a major intersection a mile away.

Again, this general lack of “Main & Main” locations has been the case along the developed East Coast for 20 years, so compromises were inevitable. More surprising was the belief among some of the real estate experts I spoke with this week that Lidl took these sites without the customary regard for the competitive characteristics of the trade areas — a compromise that they say could result in wild swings among the volumes of one store to the next, depending on the makeup of their neighbors.

Lidl, I should note, respectfully declined questions on its site selection process and has not yet made announcements as to specific sites it will open, though I expect the latter will be revealed shortly. But if the predictions of the real estate watchers hold through it would seem to put still more focus on Lidl’s ability to differentiate not on the basis of its neighborhood, but on the quality of its kitchen counters.

They not only need to shine, but to last: Lidl’s strength will need to be a compelling concept backed with a willingness to stand behind it for the long haul — and a gradual improvement is just what some retail experts expect from Lidl. That’s also where Lidl will need to differ from Fresh & Easy, the Tesco-based concept that encountered similar issues finding good locations, but was ultimately done in by a concept that wasn’t worth visiting anyway, and a management that lost faith in fixing it.

Karen Short, the Barclays’ analyst whose insightful research this week tipped us off to the Lidl real estate angle, also checked in with a report from the retail front lines in Nashville, Tenn., where Kroger appears to have finally responded to Walmart’s aggressive pricing initiatives. A Barclays’ basket study there indicated Kroger was 3.9% more expensive than Walmart on a 78-item basket, but held a 3.3% advantage on fresh items. This reflects more aggressive price investment in the recent quarter on the part of Kroger, which according to Barclays was caught “flat footed” when Walmart’s multi-billion price slashing effort first reached Music City last year.

Another hyper-competitive market appears to be Houston, where according to a recent Wolfe Research study, Kroger, Sprouts, Whole Foods and H-E-B had all taken on a fairly aggressive promotional strategy in the fresh categories since November, while Albertsons’ Randalls chain has also been more price competitive. Although Wolfe’s most recent check there indicates slightly higher pricing overall (+0.3%) than in January, the market has been deflationary by 1.5% since last April, and the pace of new stores and promotional intensity continue to keep retailers on their toes.

“Looking at the promotional stance and the level of store building taking place in Houston, the inconvenient truth, in our opinion, is that Houston’s competitive landscape continues to deteriorate and staples retailers are taking extraordinary steps to drive customer traffic to their stores,” Wolfe’s Scott Mushkin said. “This means, in some instances, that frequently purchased items like milk and chicken breasts are being priced near or below cost.”