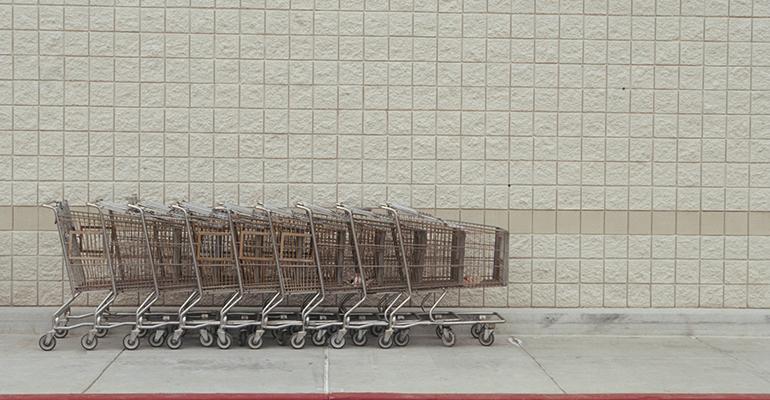 Grocery store sales were up an estimated 7.3% in December, compared with 2021 results, according to the advance monthly retail sales report from the U.S. Census Bureau.

That compares with advance estimated gains of 6% for all retail and foodservice outlets. All figures are adjusted for seasonal variation and holiday and trading-day differences, but not for price changes.

On a sequential, month-to-month basis, grocery sales showed slightly more positive momentum than the retail market overall. While the total sales volume for all retail and foodservice outlets was down 1.1% from November to December, grocery store sales were up about 0.1%, to an estimated $72.95 billion.

Grocery stores sales were also up slightly from October to November, according to revised and preliminary estimates, rising by about 0.5%, to 72.86 billion.

The overall retail and foodservice sales decline of 1.1% was larger than analysts had expected, prompting more fears that a recession may be looming, according to reports. Overall, 10 of the 13 retail categories analyzed showed monthly declines from November to December, with department stores showing the biggest decline at 6.6%.

Meanwhile the National Retail Federation on Wednesday said its analysis of holiday sales, which is based on U.S. Census Bureau data, showed a 5.3% gain for November and December, compared with a year ago, to $936.3 billion. That fell short of NRF’s previous forecast of holiday sales gains of between 6% and 8%.

“The last two years of retail sales have been unprecedented, and no one ever thought it was sustainable,” said Matthew Shay, NRF president and CEO. “Nonetheless, we closed out 2022 with impressive annual retail sales and a respectable holiday season despite historic levels of inflation and interest rate hikes to cool the economy.”

Online and other non-store sales were up 9.5%, to $261.6 billion, for the two-month holiday period, according to NRF, compared with a previous forecast of 10%-12% growth.

NRF’s calculation of retail sales excludes automobile dealers, gasoline stations and restaurants, and is not adjusted for inflation.

According to NRF’s calculations for November and December sales, compared with a year ago:

• Grocery and beverage stores were up 7.8%

• General merchandise stores were up 3.8%

• Health and personal care stores were up 2.8%

• Clothing and clothing accessory stores were up 2.2%

• Building materials and garden supply stores were up 1.5%

• Furniture and home furnishings stores were down 1.1%

•Electronics and appliance stores were down 5.7%.