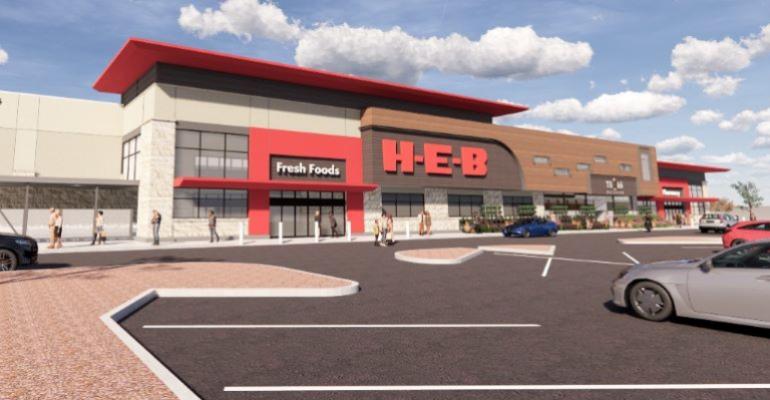 H-E-B
In January, H-E-B plans to start building a new store at U.S. Highway 290 and FM 1826 in Austin (rendering above) that will replace an existing H-E-B less than two miles away in the Oak Hill community.
News>Retail & Financial

Texas grocer H-E-B aims to boost its presence in the South Austin market with a $200 million investment that includes three new stores and a major remodel.

A few miles up the road from the Slaughter Lane store site, H-E-B has begun an extensive renovation of the H-E-B plus! supermarket on East Riverside Drive. The project will add more than 7,000 square feet of space, including to accommodate an expansion of the store’s ready-to-eat offerings with larger sushi and Meal Simple departments, according to H-E-B. To meet rising demand, the retailer said it has made the store’s H-E-B Curbside pickup service one of the chain’s largest. The remodel is expected to be completed in early 2020.

H-E-B noted that its expansion will cater to the growth and increased density across South Austin and bring more than 1,000 new jobs to the area.

“This level of investment has been years in the making, and we are incredibly excited to deliver fresh, new stores to this growing community,” Jeff Thomas, senior vice president and general manager for the Central Texas region at H-E-B, said in a statement. “Next year, we will showcase an unprecedented investment in new stores across the greater Austin area, especially in South Austin where our customers will soon be receiving the best and most advanced shopping experience H-E-B has to offer.”

Construction is already under way for the 130,000-square-foot Slaughter Lane and I-35 H-E-B supermarket (rendering above) in Austin due to open next March.

Construction is already under way for the Slaughter Lane and I-35 store. Scheduled to open March 27, 2020, the new location will feature a full-service pharmacy with drive-through, H-E-B Curbside and Home Delivery services, a True Texas BBQ restaurant with a drive-through, a bar serving beer and wine, and outdoor seating with play area for kids.

In January, H-E-B plans to start building a new store on a 30-acre site it owns at the southeastern corner of U.S. Highway 290 and FM 1826. That location will replace an existing H-E-B less than two miles away in the community of Oak Hill. Plans call for the new store to open its doors in late 2020.

Work is slated to begin next year for the new South Congress store. With a two-year construction schedule, that location is expected to open “sometime in 2022,” H-E-B said. The store will be designed as a community gathering place, including a food hall with indoor and outdoor dining spaces and the chain’s first-ever beer garden. In addition, the new H-E-B will feature two levels of underground parking and a “pedestrian-friendly perimeter” with wide, tree-lined sidewalks to encourage walking and biking to the store, the retailer said.

As the project moves forward, H-E-B plans to open a temporary store on Feb. 26 across the street at the Twin Oaks Shopping Center and then on March 22 close the current store at 2400 South Congress, which will be razed. To support customers during the transition, H-E-B said it will offer free online grocery pickup and service for in ZIP codes 78701 and 78704 during March and April. The 2400 South Congress Ave. H-E-B originally opened in 1957 at 25,000 square feet and in the decades since had undergone remodels that expanded its footprint to its current 69,000 square feet. The new store will be nearly double that size.

H-E-B said that, with multiple projects planned for South Austin, it will close an aging, 31,000-square-foot store at South 1st and William Cannon Drive on April 2, 2020. The company noted that the supermarket needs significant utility and facility repairs and lacks many of the departments and services that H-E-B customers now expect, such as a pharmacy, Meal Simple and H-E-B Curbside. In addition, the store is one of three on William Cannon Drive — including an H-E-B just a mile away at I-35 and William Cannon — and about 2.5 miles from the new store being built at I-35 and Slaughter Lane. 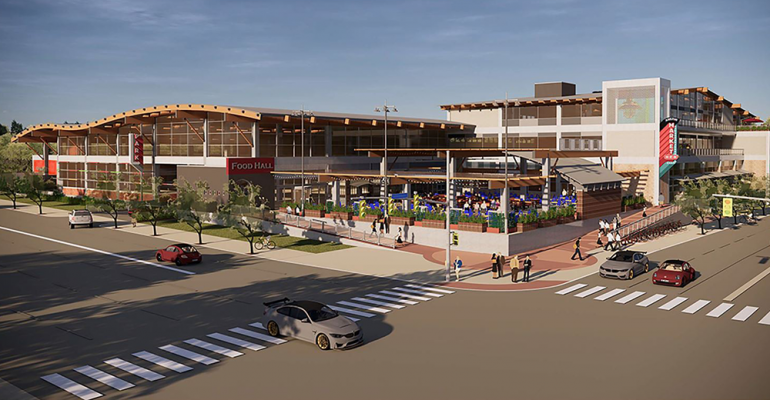 The new South Congress store (rendering above), expected to open in 2022, is being built on the site of H-E-B's oldest store in Austin.

Besides new and expanded product offerings and services, the new stores will sport designs reflecting the look and feel of their neighborhoods and incorporate eco-conscious elements, such as rainwater harvesting, water retention ponds, environmentally-friendly refrigeration and solar panels, H-E-B reported. The retailer said it has large solar installations at 23 of its Austin-area stores.

“In addition to advancing innovative online services for time savings like H-E-B Curbside and Home Delivery, H-E-B continues to invest heavily in our in-store shopping experience to offer the best selection and services in both avenues,” Thomas added.

San Antonio-based H-E-B operates more than 50 stores in Austin and the surrounding communities. Several stores in the area have been renovated or are being remodeled, such as the East 7th Street H-E-B. Planned new locations for Austin include the H-E-B Lake Austin on Exposition and Lake Austin Blvds., which is slated to open in 2021.

H-E-B, too, has made Austin a linchpin of its digital strategy. In late June, the company opened its new Eastside Tech Hub innovation center in East Austin, Texas. The 81,000-square-foot, two-story facility houses members of H-E-B’s digital team in the Austin area and serves as new headquarters for Favor, the on-demand food and grocery delivery company that the retailer acquired in February 2018.