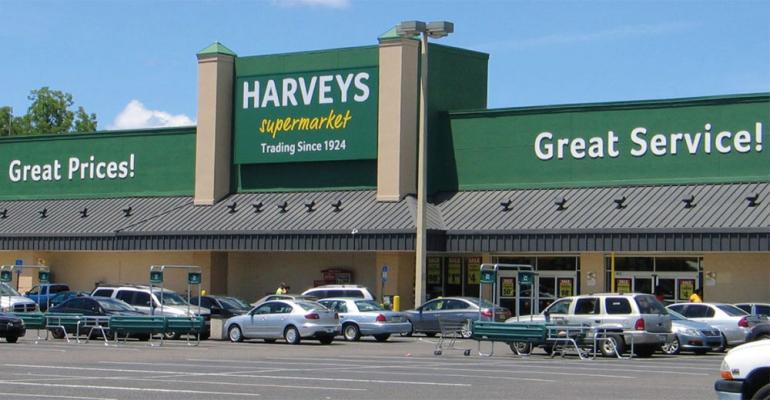 Anthony Hucker, the veteran industry executive now serving as interim CEO of Southeastern Grocers, said the company has made “substantial progress” on a transformation plan begun by his predecessor Ian McLeod, who departed the company in late June. In an interview, Hucker (left) discussed elements of that plan arriving this week in Florida where Southeastern will unveil another round of Winn-Dixie store transformations to the value-focused Harveys brand. The transition will occur Tuesday at seven stores, including sites in Central Florida and Tampa for the first time.

Southeastern acquired the Georgia-based Harveys brand from Delhaize America in 2013. Under McLeod, Southeastern subsequently refreshed the chain behind new assortments and positioning with appeal to price-conscious shoppers, and rolled it out as a new identity for several conventional Winn-Dixie and Bi-Lo stores in markets that would support it.

Hucker, a former executive with Walmart, Ahold and Schnucks, joined Southeastern as COO 18 months ago. He said shoppers have reacted positively to prior Harveys rebrandings, saying the stores have fulfilled a customer demand for value in their markets.

“We’ve been really pleasantly surprised with the customer reaction,” he said. “What we’ve learned is that we don’t look at any of the banners on any kind of hierarchy versus other brands. We instead put our focus on tailoring each individual store to the community around it, recognizing that each state, country, city, neighborhood and street is different from one another. So rather than ignore that fact we are welcoming the difference and embracing the challenge of providing each of these communities with a store they can be proud of. We’ve been pleased with the success.”

Harveys will differ from its Winn-Dixie forebear with a greater emphasis on values including the introduction of a Dollar Zone with more than 1,200 items, 725 frequently purchased items on extended discounts known as “Low and Staying Low,” about 1,800 “Great Low Price” items, and a “Pick 5 for $19.95” program in meats. Assortments have been tweaked so as to offer a greater variety of cuts in meat, while a new décor in bright yellow brings a new look to the stores.

Hucker declined to provide volume figures for the converted stores or projections for the stores that will convert, but said the anticipated results support the investment to convert them. “We wouldn’t be doing this if our customers weren’t telling us this is what we want,” he said.

Although he retains the “interim” CEO title for now, Hucker expressed interest in staying with Southeastern and completing the transformation. McLeod left Southeastern in June to be closer to family in New Zealand. He will begin a new role as CEO of Hong Kong’s Dairy Farm chain shortly.

“I am absolutely committed to the long-term success of Southeastern and grateful to the leadership team for the smooth transition and excited for the opportunity to continue to lead and drive the strategic direction of the company,” Hucker said. “I’ve been here for over 18 months and part of the senior team that did the transformation. We’ve made substantial progress and were ready to move forward.”

Echoing remarks of other industry CEOs, Hucker said food price deflation ebbed in the second quarter. He said he anticipates flat to slightly inflationary prices for the remainder of the year albeit amid “very competitive” conditions.