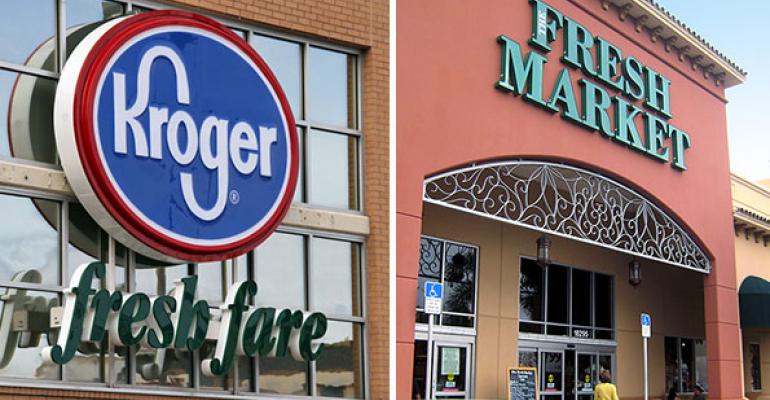 A strategic buyer — reported to have been Kroger — considered partnering with one or more private-equity firms in a joint venture to take over The Fresh Market, but dropped out of the process only days before The Fresh Market announced intentions to be taken private by Apollo Global Management.

In a filing with federal authorities describing the background of the merger, The Fresh Market revealed that several buyers, including three food retailers and a handful of private equity firms, eyed the company over a five-month period, but several — including the eventual winning bidder — got cold feet when confronting the substantial turnaround required at the company, and in particular, the downside scenario if aspects of its strategic turnaround were to fail.

Apollo’s winning bid of $28.50 per share, announced earlier this month, was $1.50 lower per share — or some $75 million less — than the $30-per-share offer it made in October that kick-started the chain’s pursuit of a potential deal.

A tightening market for debt capital put additional pressure on potential buyers to make a deal quickly, the filing revealed, while lackluster financial results for the company and a darkening macroeconomic environment raised the risks.

Although Kroger was not mentioned by name in the filing, a Reuters article published in February said it was among four companies — Apollo, KKR and TPG Capital were the others — invited to a second round of bidding. The narrative in Monday’s filing supports that notion but reveals that Kroger’s interest shifted during the process from a straight takeover to a deal whereby the retailer would be a minority investor in partnership with one or more of the remaining private equity bidders — presumably KKR and TPG — and have the right to acquire the company from the lead bidder at a later date.

It was not clear how far Kroger got in those discussions, but it informed The Fresh Market on Friday March 11 that “they had evaluated a potential opportunity to partner with either [private equity firm] and they had ultimately concluded that they would not be in a position to move forward with a potential transaction.”

Apollo in the meantime had an offer on the table and financing lined up, and so that deal was subsequently approved by the board and announced the following Monday.

According to the filing, at least two other strategic bidders — one a specialty food retailer, the other an unnamed supermarket operator — also kicked the tires during the sale process. The specialty retailer — identified as “Strategic Party B” in the filings — advanced enough in the process to be invited to make a final offer but declined to in late February, because “it was of the view that TFM was in the early stages of a turnaround that would require significant work in execution, and Strategic Party B did not believe it had the resources to operate and manage TFM and successfully implement the operating plan that had been developed by TFM’s management.”

Following the publication of the Reuters article in February a large supermarket chain identified in the filings as “Strategic Party C” requested a confidentiality agreement but days later declined to make an offer saying it believed it was too far behind other potential suitors who had been involved in discussions earlier.

The sale process began when Apollo — which had been in informal discussions with Fresh Market chairman Ray Berry — submitted an unsolicited offer to take over the struggling company in October. The company acknowledged it was evaluating strategic alternatives later that month.

Newly named CEO Rick Anicetti completed a strategic plan in November contemplating prospective financial results through 2025, but a board committee reviewing strategic alternatives urged a second set of figures projecting results “in the event that TFM was not able to execute on its strategic plan or the timing of certain initiatives contained in the strategic plan was later than anticipated.”

The committee urged this second scenario “in light of the overall softness of the financial markets, the continuing difficulty in macroeconomic trends in the specialty food retail industry, and TFM’s performance during the fourth quarter of 2015 and early 2016.”