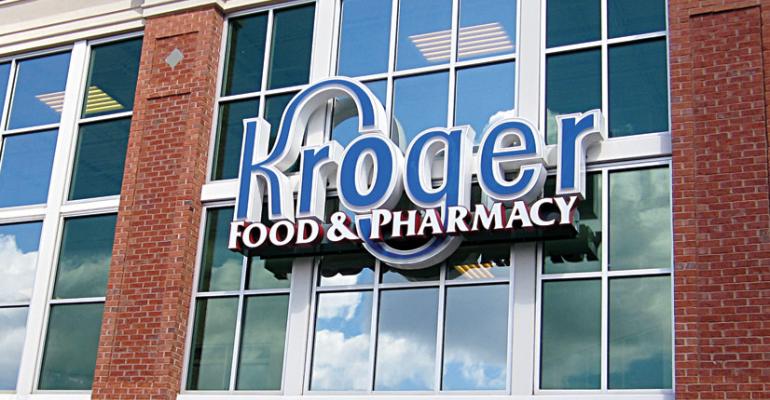 &quot;I think we have done a phenomenal job of managing our way through some of the volatility in the commodities that are out there.&quot; &mdash;MIKE SCHLOTMAN, Kroger&nbsp; &nbsp;

Kroger officials on Thursday took pains to discuss how falling prices in categories like meat, deli and seafood dampened identical sales results — but not necessarily its earnings — during its fiscal fourth quarter.

They also noted that the period came with fewer weather-related sales benefits than Kroger realized in the same period a year ago.

It all added up to non-fuel comparable-store sales results that under-performed expectations of both Kroger and the financial analysts covering it, drawing a harsh response on Wall Street sending Kroger stock down by 7% Thursday, in spite of earnings results that exceeded market estimates.

"Our job is to operate the best we can given the environment we're operating in," Mike Schlotman, Kroger's CFO, said in a conference call Thursday morning. "I think we have done a phenomenal job of managing our way through some of the volatility in the commodities that are out there."

According to Schlotman, the volatility included significant deflationary conditions in meat, deli and seafood during the quarter but significant inflation in fresh produce. Overall inflation was about 0.6% for the period.

Effects of the changing prices are not easily understood, Schlotman maintained. For example, meat deflation of about 5% helped to bring the category into the financial reach of more shoppers, which affected higher volumes and better profits, even as the category's contribution to ID sales shrunk along with prices. Meanwhile, 6% inflation in produce, though typically considered a tailwind at retail, indicated product shortages and reduced quality on display.

"One of the things we have been trying to encourage people to do is [not to] look at 60 basis points of inflation, try to dig down on the different components of it to understand how that can affect our business," Schlotman said.

"In many instances, like meat, you wind up generating significantly more gross profit dollars and we would expect that to continue to play out in different categories throughout the year," he added. "Think about the effect of milk on the top line. Milk generated good profit for us in the year for us. [It was a] headwind to reported ID sales, absolutely. But overall the generation of profitability in milk was strong for the year."

As reported previously, non-fuel identical store sales in the quarter improved by 3.7%, or 3.9% excluding the newly acquired Roundy's — a figure below the company's forecast of 4% to 4.5% comps and analyst estimates of 4.4%.

With the expectation that inflation would continue to be a drag on ID sales, the Cincinnati-headquartered company said it was forecasting modest comps to continue for the new fiscal year — about 2.5% to 3.5% — a figure that includes sales at Roundy's, where Kroger is only beginning to address falling sales at the acquired Pick n' Save and Copps chains in Wisconsin.

Analysts acknowledged it was a “disappointing” quarter for Kroger but varied as to their level of concern. John Heinbockel, an analyst at Guggenheim Securities, urged investors to see beyond the “noise” and buy on the early share price weakness. He noted that Kroger has a history of beating modest estimates.

While also acknowledging Kroger’s conservative nature, Bill Kirk of RBC Capital Markets in a research note Thursday raised several industry events that could prevent such a scenario, citing stepped up investments and/or additional market entries from competitors including Publix, Walmart, Southeastern Grocers, Wegmans and Lidl, and Aldi’s recent announcement that it would accept credit cards.

In other items addressed at the conference:

• Kroger is seeking a segment of shoppers who will respond to natural/organic and local offerings in a setting that also offers everyday products with Main & Vine, it’s newly opened concept in Washington.

“We think it's always important to be trying different approaches to connecting with customers. As you know we've had phenomenal success in natural and organic over the last several years, and we really see customers continuing to see that as important,” Rodney McMullen, CEO said. “With that said, there's certain items where the customer still wants to buy everyday stuff. When you look at Main & Vine, we're trying to merge those two pieces but connect at a local level a little deeper than we normally would.”

Main & Vine’s assortment was developed through consultation with Kroger’s analytics arm, 8451, McMullen added. “It reimagines the modern grocery shopping experience, placing in the middle of the store fresh produce and bulk items along with an event center where shoppers can enjoy cooking classes and find a new recipe idea for dinner tonight. Customer feedback has been very positive,” he said.

• On the discount front, McMullen said Kroger was still wrestling with the financial model at its nascent discount banner, Ruler Foods. “On Ruler, we're still trying to understand the economics of the model where it performs at an ROIC that we're happy with. We continue to make progress, but we do not think we've figured it out.”