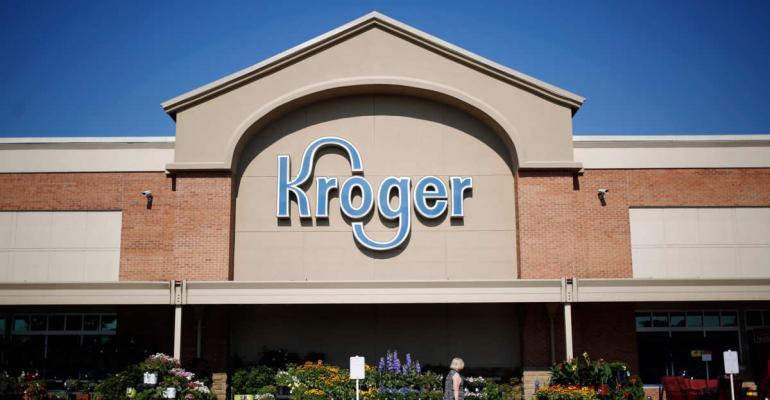 Company raises sales and earnings outlook for the year amid gains in private label, digital revenues

Kroger saw its sales surge in its fiscal third quarter, driven by same-store sales gains of 6.9% vs. a year ago, excluding fuel, and double-digit increases in both private label and digital sales.

Consumers are apparently cutting back on spending in areas other than groceries, the company said, although they are aggressively seeking deals in the form of promotions and private label alternatives.

The results prompted the company to raise its sales outlook for the year. It now expects same-store sales, excluding fuel, to be up in the range of 5.1% to 5.3% for the full fiscal year, and net earnings per diluted share to be in the range of $4.05 to $4.15.

The company previously had projected same-store sales gains of 4% to 4.5% for the year, and adjusted net earnings per diluted share of $3.95 to $4.05.

The company said it was making "early progress" on its integration planning related to its pending merger with Albertsons Cos., but declined to take questions from analysts on the topic and said it did not have a substantial update at this time. Earlier this week, the CEOs of both companies testified before a Senate subcommittee exploring the antitrust implications of the $24.6 billion deal, which is expected to close in early 2024.

Kroger also said its fourth-quarter sales and profit comparisons will be up against high inflation in last year’s fourth quarter. Same store sales in the final quarter are expected to grow between 4% and 5%, said Gary Millerchip, chief financial officer.

Some of the highlights of the third quarter included strong growth in private label, with same-store Our Brand sales (encompassing all of the company’s private labels) up 10.4%, compared with a year ago. Pet products were an especially strong category within Kroger’s private label portfolio, the company said.

“This quarter we saw tremendous growth in our pet food brands, as families continue to treat their dogs and cats like a member of the family,” McMullen said.

The company also said it continues to expand its Smart Way entry-level price point brand, which was introduced in the second quarter.

“These products are meeting the demands of our customers on a budget,” McMullen said, noting that 2 million households have purchased Smart Way products.

Digital coupon downloads are also up 32% over a year ago, he said.

The company also introduced mobile app enhancements during the quarter, including its first in-app flash sales.

McMullen also said the company was “incredibly pleased” with customer response to its new Boost program, which rolled out earlier this year. The membership program offers free grocery delivery on orders over $35 and discounts on gasoline.

Overall, digital sales were up 10% in the third quarter, vs. a year ago.

The company cited some weakness in nonfood items in the third quarter, as well as in categories where there were supply chain disruption.

“Overall, supply chain is getting better, but we still have categories like cat food, dog food, baby formula, cold remedies — some of those areas that continue to have issues,” said McMullen.

The company also said fresh categories, such as chicken, are seeing some deceleration in inflation, while CPG inflation has been “more stubborn” — which is one of the factors driving customers to Kroger’s private labels, McMullen said.