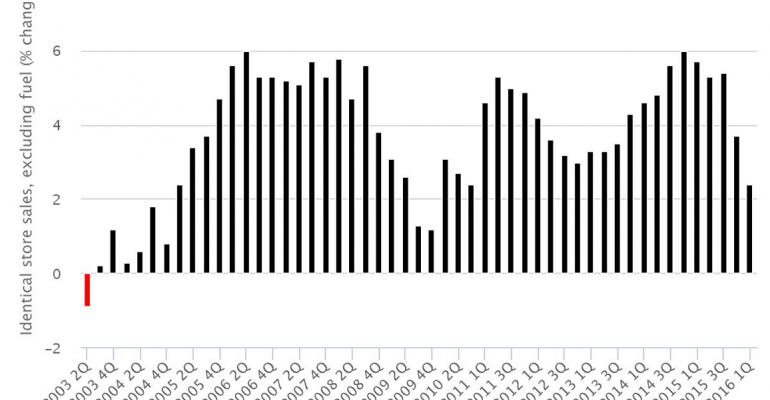 The chart below shows Kroger’s ID sales going back to 2Q of 2003, the last quarter the retailer’s ID sales dipped negative. Since then, ID sales have ranged from 0.2% to 6%. Although growth stalled during the Great Recession, ID sales stayed positive.

“It speaks for itself,” Andrew Wolf, an analyst with BB&T Capital Markets, said of the accomplishment. “It’s longevity — twelve-and-a-half years.”

Wolf noted that there are few large companies, particularly in retail, that have matched Kroger’s comps. Big names like Publix, Walmart and Whole Foods haven’t done it, he said.

However, it’s Kroger’s performance during the Great Recession that leaves Wolf most impressed.

“In the recession of late ‘09 when … all of retail turned deeply negative, they kept their comps positive. That is truly a very remarkable result. And that shows you that their repositioning had good traction,” he said, referencing Kroger’s value repositioning.

The last quarter Kroger saw negative ID sales happens to be when David Dillon first took the reins as CEO, and Wolf credits Dillon’s leadership for much of the retailer’s successful run.

“I had a meeting with him 10 years ago or so, and he told me they were never going to make a sales or earnings number again by moving the pencil, i.e. raising prices, as long as he was CEO,” said Wolf. “So I think he had remarkable courage and a strong spine.”

Kroger’s repositioning to be more value-focused was a risky move at the time, Wolf noted, and not one Wall Street initially looked on favorably. Yet, given the fates of some other once prominent chains — A&P, American Stores, even Safeway — it’s a move that’s paid off.

“The longevity is great, but more importantly is going to be how they do in the next recession,” said Wolf.

For retailers and consumers, ‘living with COVID’ means a polarized path ahead
Jul 26, 2021