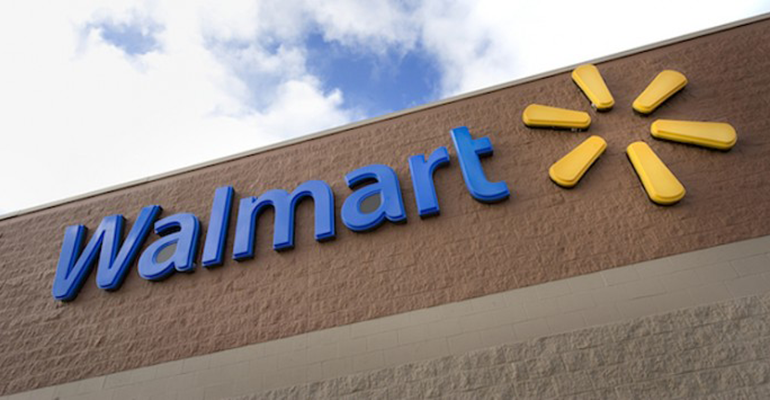 Seven of the largest U.S. grocery retailers were among the 10 biggest companies in the GlobalData’s Top 25 Global Retailers list.

Ranked by 2021 revenue, the list has Walmart, Amazon, CVS Health and Costco Wholesale as the top four, according to GlobalData. The London-based industry data and analytics firm noted that half of the top 25 publicly traded global retailers posted more than 8% year-over-year revenue growth despite pandemic-related challenges.

The other U.S.-based grocery retailers in the top 10 were The Kroger Co., Walgreens Boots Alliance and Target at Nos. 7, 8 and 9, respectively. Also making the top 25 list among companies operating in the U.S. grocery arena were Ahold Delhaize (No. 13), Seven & I Holdings/7-Eleven (No. 15), Albertsons (No. 17) and Alimentation Couche-Tard/Circle K (No. 19).

Grocery retailers on the GlobalData list from North America also included George Weston/Sobeys (No. 21) and Loblaw Cos. (No. 23). 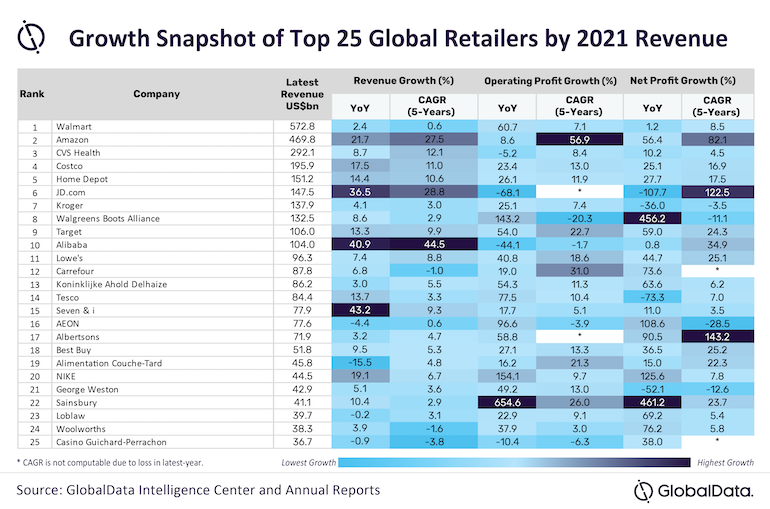 Retailers worldwide were able to quickly adapt amid the pandemic by fast ramp-ups of e-commerce services, according to GlobalData.

“All 25 of the retailers we tracked implemented measures to expand their business operations during the COVID-19 period. Major online merchants such as Amazon, JD.com and Alibaba gained a revenue growth of above 20% in FY2021,” Divya Vootkuru, business fundamentals analyst at GlobalData, said in a statement. “Further, they saw a compound annual growth rate (CAGR) of more than 25% during the 2017-2021 period, driven by a significant increase in the number of annual active customers as buyers preferred to shop online.”

Of the top 25 retailers, Seven & I was the only company to report double-digit growth in 2021 revenue, which rose 43.2% year over year and at a 9.3% CAGR. GlobalData said the gain reflected higher sales in overseas convenience store operations, fueled mainly by 7-Eleven’s acquisition of Speedway a year ago. Chinese e-tailer JD.com was the only major player to see a year-over decline of over 60% in operating profit and net profit, while Laval, Quebec-based Couche-Tard had the largest year-over year loss in revenue, with a decline of more than 15%.

“The impressive growth seen by these pharmaceutical retailers resulted from an increase in the consumption of prescription drugs, the release of new pharmaceutical products and the successful distribution of COVID-19 vaccines,” Vootkuru observed.

Home improvement and gardening supply retailers recorded growth in operational and net earnings, with over 7% growth by The Home Depot and over 20% growth at rival Lowe’s, GlobalData said.

“A survey by GlobalData reveals that 59.8% of U.K. consumers used their extra time during lockdowns to refresh their homes, with 29.5% buying new homeware and 13% buying new furniture,” Vootkuru added. “The most popular was the study/office, as people prepared their desks to work from home, but dining rooms and living rooms also got a spruce up. It wasn’t just new homeware, though, as 74.9% of respondents said they intended to undertake some DIY at home, greatly benefitting retailers such as Lowe’s and Home Depot.”