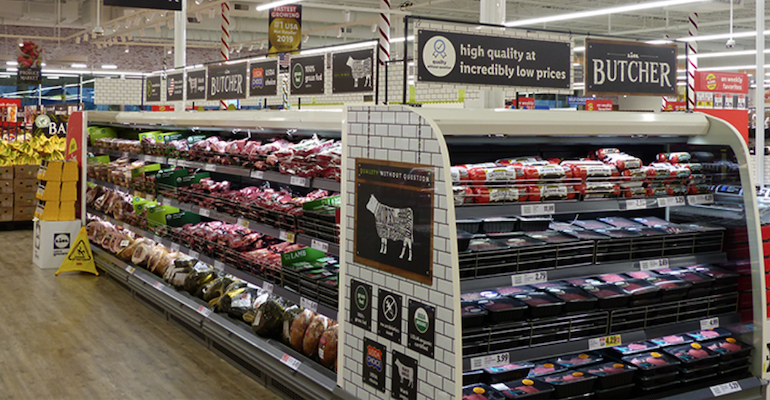 Lidl offers consumers relief with round of grocery price cuts

Lidl US is giving a break to consumers feeling the squeeze of elevated food prices amid historically high inflation.

The hard discount grocer said Wednesday that it will drop prices on more than 100 items in all of its stores on the East Coast. Among a sample of 29 participating products, the discounts ranged from 12.8% for the lowest-priced item (canned Mandarin oranges at 95 cents, a 14-cent savings) to 10.6% for the highest-priced item on the list (AVA Black Angus top sirloin steak at $8.44, a $1.00 savings). 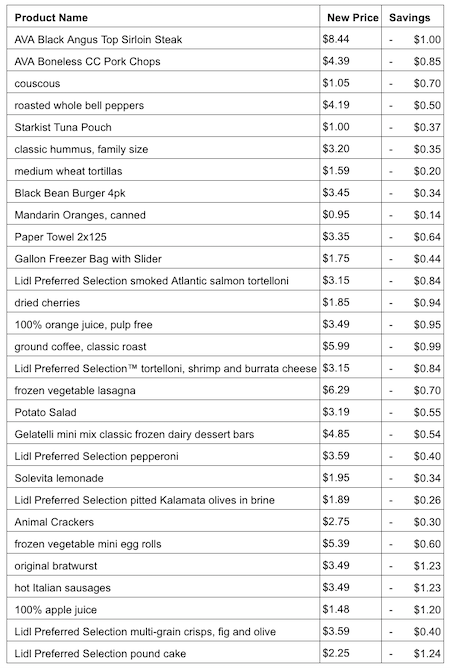 Product categories for Lidl’s sample basket (see table on left from Lidl US) included meat, deli, frozen and refrigerated foods, beverages, household goods, snacks and a range of center-store items. By dollars, the savings range from 14 cents to $1.24. Five items offer a discount of $1 or more, and 18 provide a savings of at least 50 cents.

Plans call for the price cuts to go into effect on June 8 and run until August. Lidl said customers can expect to save more than $50 on the basket of items included in the summer campaign.

The “summer price drop” comes as inflationary pressures across the grocery supply chain have lifted food prices for many retailers, particularly on staples including meat, grains, coffee, frozen prepared foods and other key household products, according to Lidl.

“As many families contend with rising prices due to inflation, we hope to ease their financial burden at the checkout counter by investing even more to lower our prices,” Lidl US President and CEO Michal Lagunionek. “This price-cutting drive is part of Lidl’s ongoing commitment to offer the best value in every community we serve.”

According to the U.S. Bureau of Labor Statistics (BLS), month-to-month increases in the food-at-home Consumer Price Index (CPI) eased up slightly last month but have remained sharp so far in 2022. A monthly uptick of 0.9% in April came after gains of 1.5% in March, 1.4% in February and 1% in January, which followed just a 0.4% uptick in December.

On a year-over-year basis, April’s food-at-home index surged 10.8%, topping the 10% gain in March, which marked the largest 12-month uptick since March 1981, according to BLS. That came after increases of 8.6% in February and 7.4% in January.

Grocery retailers have been trying to lend a hand to consumers fretting over price sticker shock via targeted promotions and enhanced loyalty program benefits. Last month, Lidl rival Aldi U.S. reaffirmed its stance on delivering low prices, pledging that the retailer would remain a grocery price leader across its 2,150-store, 38-state market area.

For the four weeks ended May 15, grocery prices rose 13.2% year over year, compared with a 7% to 8% rate at the start of 2022, according to Chicago-based consumer data specialist Numerator. Pricing was up 15.8% for household items and 10.1% for health and beauty aids.

By retail channel, online and dollar stores had the highest grocery inflation rates, up 21.5% and 19.2% year over year, respectively, for the four-week period, Numerator reported. Next in terms of inflation growth were mass merchants (up 12.3%) and supermarkets (up 11.4%). Warehouse clubs had the lowest inflation rate in that time span, up 7.3% versus a year ago.