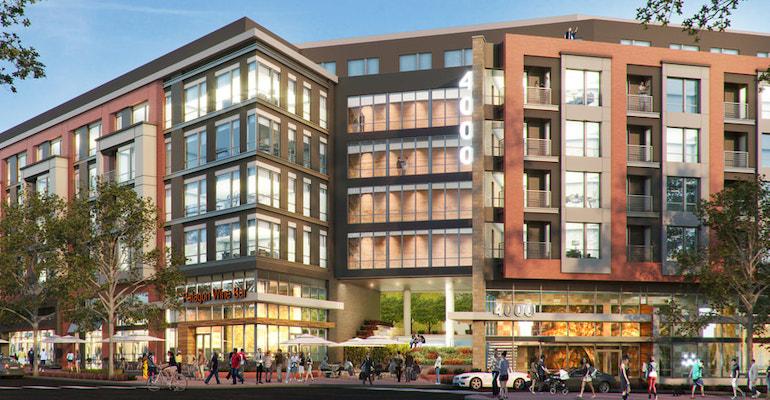 Hard discount grocer Lidl has unveiled plans for a third Washington, D.C., store as it readies the opening of its 34th Virginia location next week.

The Washington DC Economic Partnership (WDCEP) said Monday that Lidl US plans to build a nearly 29,000-square-foot in Upton Place, a new mixed-use development at 4000 Wisconsin Ave. NW in the District of Columbia by Donohoe Cos. and partner Apartment Investment and Management Company (AIMCO). No expected opening date was disclosed.

Meanwhile, Arlington, Va.-based Lidl US said it plans to open a new store at 1330 Chain Bridge Rd. in McLean, Va., on June 1. Currently, the chain operates more than 20 stores in the D.C./Maryland/Virginia (DMV) region.

Lidl broke ground on its first D.C. location in January. The 29,000-square-foot store at Skyland Town Center is slated to open in late fall 2022. According to the grocery chain, the store will mark the first new supermarket to serve residents in Wards 7 and 8 in more than a decade. WDCEP said it first began courting Lidl for a D.C. store in 2014.

In February, Lidl and the D.C. mayor’s office announced plans for a 27,000 square-foot store on the ground floor of the DC USA mall in the district’s Columbia Heights neighborhood.

“We at Lidl US are ecstatic to bring a Lidl store to the fantastic Upton Place project and the neighboring community,” Daniel Goodman, director of real estate for Lidl in the D.C./Maryland market, said in a statement. “This is our third D.C. location and further advances our goal of conveniently bringing Lidl’s high-quality offerings and unbeatable pricing to the D.C. community.”

“We are excited that Lidl has committed to be a part of the district’s expanding grocery industry,” commented WDCEP President and CEO Keith Sellars. “WDCEP has collaborated with our partners, including the city and private investors, for over two decades to achieve the best level of grocery diversity and offerings throughout the city.”

The Upton Place project will include a six- and eight-story building, three courtyards, two rooftop spaces, a pool, yoga studio and fitness center.

“We are incredibly excited about our new partnership with Lidl. This strong anchor complements the growing surrounding retail environment and provides a wonderful choice and convenience to the community,” stated Matt Hopkins, regional vice president of development at AIMCO. “Fresh groceries provided by world-class operator builds a better whole-life experience for both the established neighborhood and new residents alike.”

Lidl said it invested about $10 million in the 25,000-square-foot McLean store. As in the Germany-based grocer’s other U.S. locations, the McLean Lidl offers an assortment of fresh products — including produce, a fresh bakery, beef, poultry and seafood — plus a an array of household products that rotate weekly. Lidl upholds an everyday-low-price offering via a high percentage of private-brand items, a curated selection and a compact, easy-to-shop format with ultra-efficient operation.

“McLean residents have been looking forward to the opening of the Lidl grocery store for some time because of its reputation for high-quality products at discount prices,” according to Fairfax County Supervisor John Foust.

At the grand opening event for the McLean store, the first 100 customers in line before the ribbon-cutting will receive a special gift card of $5 to $100. Shoppers also will be able to enter to win a $500 Lidl gift card, sample Lidl products and participate in special giveaways. Lidl said the new store will bring more than 45 jobs, with starting pay for all associates at $16 per hour, plus benefits.

“Lidl has a long commitment to Virginia, having located its U.S. headquarters here in the commonwealth,” stated Virginia Secretary of Agriculture and Forestry Matthew Lohr. “This McLean store will be their 34th in Virginia, and their $10 ,illion investment will bring affordable food and groceries to families across the region.”