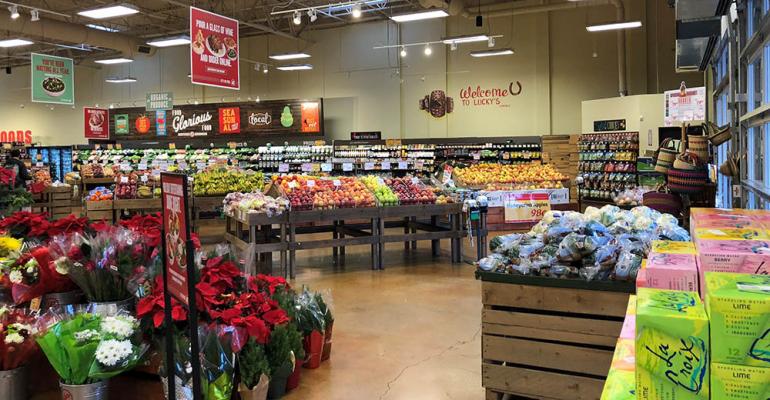 Store count could grow 40% or more by year’s end

The next year will bring a much bigger retail presence for Lucky’s Market.

On Monday, the Boulder, Colo.-based natural and organic supermarket chain said its store count could exceed 40 by the end of 2018, compared with 28 locations in 11 states currently — which would represent growth of more than 40%.

Lucky’s reported it has signed up to 20 leases signed for new stores from Montana to Florida. The company said it has signed letters of intent for “a handful” of other stores.

Sixteen of the new-store leases are in Florida, and two are in Lucky’s home state of Colorado. These locations are slated to open in the next 18 to 24 months, Lucky’s said.

Lucky’s concept encompasses specialty foods such as in-house smoked bacon, house-made sausages, fresh seafood; a large selection of fresh, local produce; and a fresh bakery. The in-house butcher serves “never ever” meats, which have never been treated with antibiotics or artificial growth hormones, the retailer noted. Store departments, too, feature ready-to-eat meals (made from scratch daily at the store), fresh grab-and-go sushi, hot ramen bars, and “cheese islands” stocked with cheeses from around the world.

Also offered are juice bars, bulk foods, apothecary departments, beer and wine, including “Sip ‘n Stroll” program in which customers can get a $2 pint of local beer or a $3 glass of wine.

Launched in 2003 by chefs Trish and Bo Sharon, Lucky’s currently has stores — which average about 30,000 square feet — in Colorado, Florida, Georgia, Indiana, Iowa, Kentucky, Michigan, Missouri, Montana, Ohio and Wyoming. In April 2016, the company announced a strategic partnership with The Kroger Co., in which the supermarket giant invested an undisclosed amount to help spur Lucky’s expansion.