Market Basket workers who demanded the reinstatement of fired president Arthur T. Demoulas have set a Thursday deadline for a response from the company’s new co-CEOs, according to a memo SN obtained from Facebook.

However, it remained unclear what consequences would await the company in the event the demands are not met to employee satisfaction — a concern considering the CEOs said they lacked the authority to reinstate Arthur T. Demoulas. 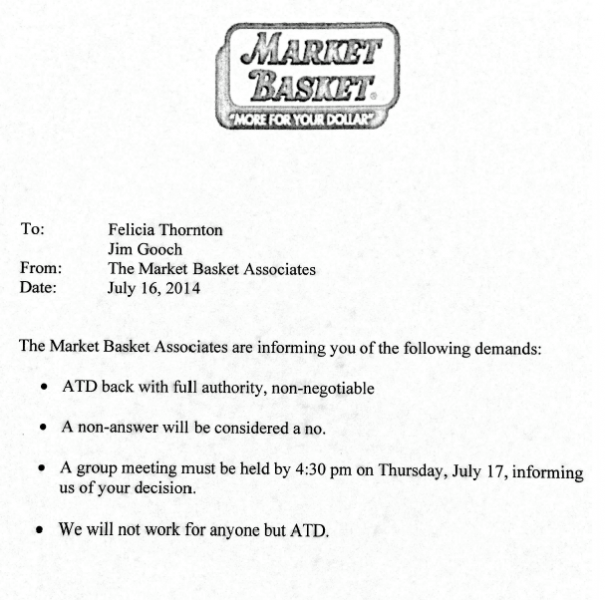 The group of employees who posted the memo, known as “Save Market Basket,” informed co-CEOs Felicia Thornton and Jim Gooch last week to let the board of directors know that they would not take direction from leaders other than Arthur T. Demoulas, whom the board fired late last month. Workers have since passed out fliers at stores and hung signs at corporate headquarters in Tewksbury, Mass. expressing support for the fired leader.

In a statement provided to SN Wednesday, Thornton and Gooch said: “To be clear, we do not have authority to reinstate Arthur T. Demoulas as CEO — that is a matter for the Board and we have already communicated the request from the headquarters meeting last week to the Chairman of the Board for the Board’s consideration.

“This morning, several employees informed us that they require an answer on their demands by the end of day tomorrow," they added. "When we attempted to acknowledge their concern and respond on the status of the request, these employees instead left the meeting. We also are aware of a memo they issued, although it was not immediately given to us by these employees. This behavior is not appropriate nor is it in keeping with Market Basket’s culture of respect.”

At least some Market Basket workers said they were planning not to report to work Friday if their demands weren’t met, but it was not clear Wednesday how many would follow through. Participants in a discussion at the Save Market Basket social media page were debating the topic Wednesday. One message suggested that only store managers would participate in a walkout; another said specific plans for a work stoppage would not be discussed publically in advance. Several feared potential retribution. Market Basket employees are not represented by a union.

Scott Patenaude, a meat manager at Market Basket’s Burlington, Mass. store, told SN early Wednesday that he understood that most or all workers at headquarters and warehouses would participate in a walkout but he did not know for how long. “Stores might be open, but how long until product runs out if the deliveries aren’t coming?” he said.