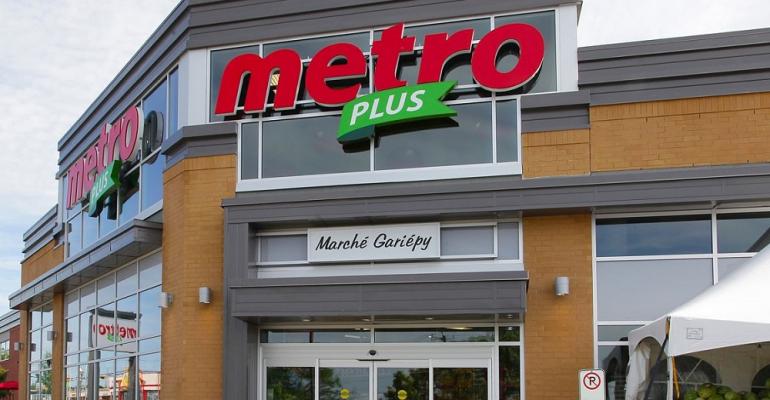 The Montreal-based retailer posted same-store sales gains of 0.4% in the quarter, which ended Sept. 30, amid a slight decline in traffic and inflation of 0.3%.

The gains came despite the addition of about 1 million square feet of space added by food retailers in the past year, including a significant expansion effort by Costco Wholesale Corp. Traditional retailers have also added stores, as have discounters such as Dollarama and Giant Tiger, according to local reports. Some of the expansion has involved the takeover of space abandoned by Target Corp. when that chain left the market in 2015, the reports said.

“It creates competition — it creates a heavily promotional environment,” said Eric La Flèche, Metro’s president and CEO, of the expanded square footage, in a conference call with analysts. “It has an impact, and we have to manage through that.

“I think the positive news is that we turned back to positive territory in same-store sales, after negative same-store sales in the previous quarter,” he added. “Hopefully the turn to slight inflation will remain.”

Metro said it is bracing for an increase in the Ontario minimum wage to $14 Canadian (about $11 U.S.), a 21% increase from the current rate of $11.60 Canadian (About $9.11 U.S.), effective Jan. 1, 2018. The company was undertaking several initiatives to manage costs, including Increasing productivity, leveraging technology and controlling all costs.

“We have to manage the labor hours as much as we can without disrupting service,” said La Flèche said. “It’s a big challenge, but we are addressing it.”

The company also said it is planning to expand its test of home delivery of groceries to Ontario by late fiscal 2018 or early fiscal 2019. Metro currently offers the service in Quebec, greater Montreal and Gatineau. It also offers click-and-collect service at seven locations.

“Sales are growing nicely,” he said. “It is still small in relative terms, but clearly showing good growth. Customers still have a preference for home delivery, and it’s our job to offer it to them at economics that make sense to us. The economics are challenging, but we are making progress.”

The company, which acquired a majority stake in meal-kit company MissFresh in August, also said it had launched a test of offering meal kits in some stores as an extension of its prepared foods offering.

Overall net come for the fourth quarter, which included 13 weeks compared with 12 in the year-ago period, was up 6.8%, to $154.9 million Canadian (about $121.5 million U.S.). Excluding the extra week and about a $2.5 million Canadian pre-tax charge related to the pending acquisition of The Jean Coutu Group and the modernization of the company’s distribution network in Toronto, net income would have been similar to that of a year ago.

As previously reported, after the quarter ended Metro announced that it planned to acquire drugstore chain The Jean Coutu Group for about $4.5 billion Canadian (about $3.5 billion U.S.) and also said it would sell the majority of its stake in convenience-store operator Alimentation Couche-Tard to help finance the purchase.