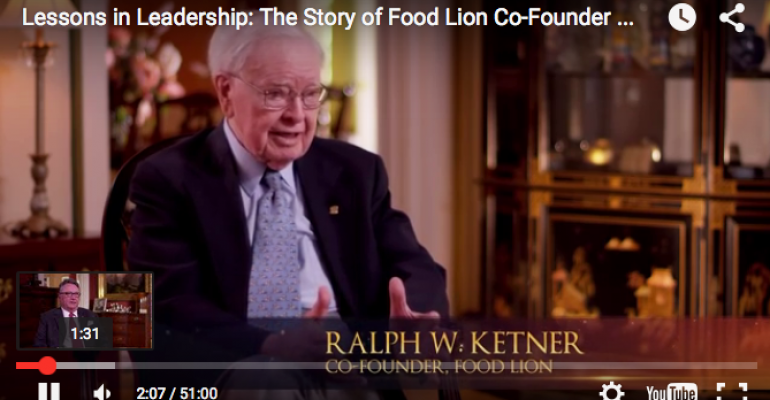 A new documentary celebrating the business accomplishments of Food Lion co-founder Ralph Ketner is being released in time for Ketner’s 95th birthday this month.

The film, “Lessons in Leadership” will be distributed to high schools throughout North Carolina. It was produced by Food Lion and Catawba College, both located in Ketner’s home of Salisbury, N.C. Ketner returned from Food Lion in 1981 and served on its board of directors until 1990. He maintains an office at Catawba, where the college’s business school is named in his honor.

The film features stories and advice from those who Ketner touched throughout his long-tenured career, from leaders in the Salisbury community to family members and colleagues. To help schools use the leadership lessons from Ketner, Catawba College collaborated with Rowan-Salisbury Schools' educators to create five lesson plans that enable students to take the concepts featured in the video and apply them in a practical way in a classroom setting.

"For more than 50 years, Food Lion has been an important part of the city of Salisbury's history and all of this was made possible by our company's founders, including Mr. Ketner," Meg Ham, president of Food Lion said. "When approached by Catawba College about this opportunity to preserve the rich heritage of Mr. Ketner's impact on this community, from the founding of Food Lion to his pro bono work with Catawba, we couldn't think of a better way to honor our founder and all he has given to us.

"We were honored to underwrite this video to preserve the history and lessons Mr. Ketner has taught all of us as part of his vision to build a company with the focus on always taking care of the customer, having the lowest prices in North Carolina and being a good corporate citizen, which are all strong pillars of our business today."

"We are delighted to be involved in such a wonderful project — one that both captures the story of Ralph Ketner and the story of the growth and evolution of Food Town into Food Lion," Catawba College President Brien Lewis said. "Catawba's role will be to continue sharing this video resource, and the five lesson plans created to accompany it, with educators across the state for use in their classrooms. By helping bring Mr. Ketner's lessons into today's classrooms, we hope to inspire a future generation of entrepreneurs who will dream a big idea and work diligently to make that idea a reality."