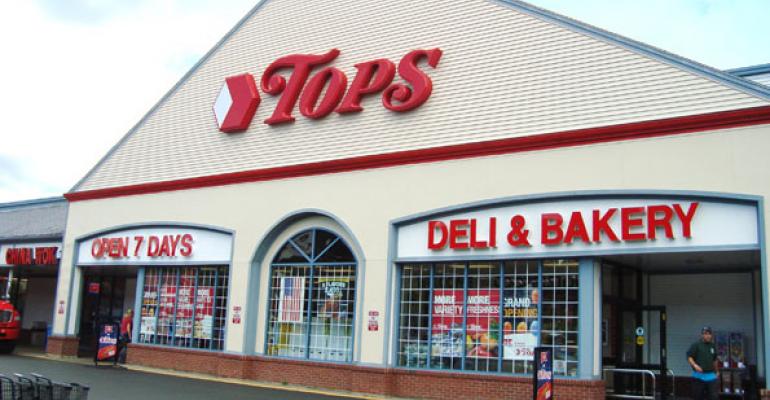 Aggressive promotional activity helped Tops Markets maintain or grow its market share across its operating areas in the fourth quarter, the company said, although profit margins took a hit.

Deflation — particularly in protein and dairy categories — also impacted sales in the quarter, as did a reduction in federal funding for the Supplemental Nutrition Assistance Program, or SNAP.

“We continue to take a long-term view and are implementing the appropriate strategic steps to make our operations more efficient and to set the stage for stronger financial performance when the operating environment improves,” said Frank Curci, Tops chairman and CEO, in a conference call with analysts.

Same-store sales on a comparable, 12-week basis were down 1.9% for the quarter compared with a year ago, which the company attributed to deflation, a decline in traffic and the decrease in SNAP funding.

The company attributed 50 basis points of the same-store sales decline for the year to the decline in federal funding for SNAP, which accounts for about 10% of Tops’ sales.

Deflation negatively impacted sales for the full year by about $24 million, or 1.1%, the company said. In addition, the company said it faced increased promotional and pricing pressures in its markets in the fourth quarter.

Tops also said it has taken some time for the six stores it acquired from Ahold Delhaize in eastern New York and central Massachusetts to get on track. The four Stop & Shop locations and two Hannaford Bros. stores, acquired at the end of the third quarter of 2016, contributed almost $29 million in sales but had negative $1.9 million in EBITDA, the company said.

The poor performance stemmed from two of the locations, while the other four had positive EBITDA, Tops said. Five of the stores have been remodeled, and the sixth is in the midst of being remodeled.

The challenges overall at the acquired stores stemmed from retaining the pricing levels at the stores while layering on Tops promotional strategies, Curci explained, which impacted both sales and margins.

In addition to the six stores acquired from Ahold Delhaize, which expanded the company’s geographic footprint in its easternmost reach, Tops also acquired three stores in 2016 in smaller markets that help fill in existing operating geographies.

The company will also evaluate its store portfolio and may close two to four locations in 2017, Curci said.

Tops also said its ongoing dispute with a Teamsters local over pension fund contributions will likely not be resolved until early 2018, but is confident it will prevail. The dispute is related to Tops’ 2013 acquisition of Erie Logistics from C&S Wholesale Grocers.

The retailer is also focusing on addressing certain note obligations valued at $85 million that are due in June 2018 and will appear on the balance sheet in the second quarter.

“Our management team is focused on addressing these notes and lowering overall leverage in the near term,” said David Langless, EVP and CFO. “We are confident in our ability to mitigate the maturities risk.”

Tops said it was particularly aggressive on price in December, which it said helped it retain share against mass merchant and club store competitors.

The company’s Christmas Bonus promotion, in which customers could earn discounts on gift cards based on their spending levels, boosted sales by an estimated $6 million to $7 million.

In addition, in the fourth quarter Tops expanded by 20% the number of items in its “Price Lock Guarantee” promotion, in which it maintains low prices for eight to 12 weeks at a time as a tool to compete against EDLP competitors.

“December was a particularly strong month for Tops,” said Curci. “We increased our promotional activities, which did put some pressure on margins, but we felt it was prudent as growing or maintaining our share will really set us up nicely as … we return to normal retail pricing levels.”

Consumer response to Tops’ promotional activity was particularly strong among its most loyal and highest-spending shoppers, the company said.

The company’s expansion of its organic and natural offerings, including additional products in the Full Circle private-label line, is also driving sales at the company, according to John Persons, president of Tops.

He said sales of organic products alone were up 23% for the year in both dollar and unit volume, and up 33% for the fourth quarter.

“We want to be recognized as a destination by consumers for this category,” said Persons, adding that Tops now carries more than 3,000 different organic items. “This will continue to be a focus of ours in 2017 as consumers shift toward buying these categories.”

Expanding the prepared-foods offering has also helped drive sales growth, he said, as the company has added more specialty salads and take-home meals. Sales in that category were up 5%-plus in 2016, Persons said.

Tops also expanded its marketing initiatives in 2016, including new TV ads promoting private label and professional sports partnerships. Digital is now the second-largest area of marketing spend for the company, and two-thirds of the nearly 500,000 customers who engage with the brand digitally do so with mobile devices, Persons said.