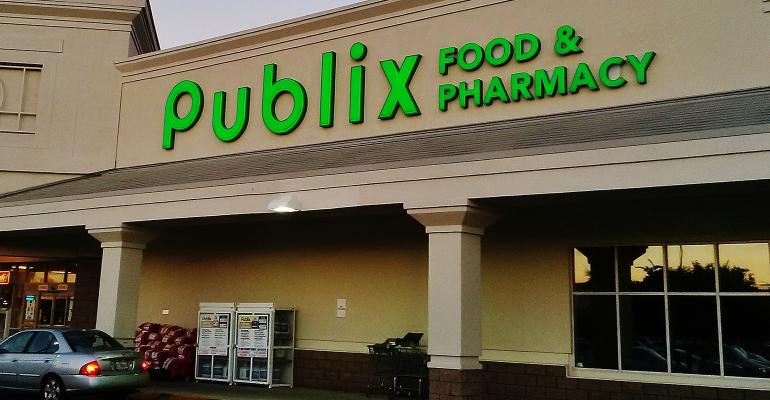 Comps up 4.3% in Q3, mostly from September storm

Publix Super Markets said it received a significant sales boost in the third quarter from the impact of Hurricane Irma as consumers stocked up on groceries in anticipation of the storm and replenished their supplies after it was over.

Comparable-store sales were up 4.3% for the quarter, including a 3.1% contribution from the impact of the hurricane. Incremental sales as a result of the storm totaled an estimated $250 million, Publix said in a filing with Securities and Exchange Commission. The storm hit Florida Sept. 10, causing scattered damage throughout the state and extensive power outages, after wreaking havoc in the Caribbean.

“We have faced many hurricanes in our past, but none with the size and impact of Hurricane Irma,” said Todd Jones, president and CEO, Publix. “I could not be more proud of our associates for their passionate service to our customers before and after the hurricane.”

Lakeland, Fla.-based Publix, which operates the majority of its 1,157 stores in Florida, has perhaps as much experience as any retailer preparing for and recovering from hurricanes. When Hurricane Irma hit, the company said most of its stores that had to close for evacuations or severe weather were reopened within two days following the passage of the storm, operating on generator power if necessary. All stores were reopened within six days, with the exception of one location in Key West, Fla., which reopened the following week.

Through the first nine months, Publix reported that net income was up 3%, to $1.53 billion, on a sales increase of 3%, to $25.6 billion. Year-to-date comparable-store sales were up 1.2%, including an estimated 1% impact from Hurricane Irma.

Effective Nov. 1, 2017, Publix’s stock price increased to $36.85 per share, up from from $36.05 per share. The stock is not publicly traded and is made available for sale only to current Publix employees and members of its board of directors.

Publix opened 27 supermarkets through the first three quarters, including four replacement stores, and remodeled 100 locations. It also closed nine supermarkets, including two that were replaced during the current year, with the remaining seven to be replaced in subsequent periods.

The company said it expects to spend $400 million on capital expenditures for the remainder of 2017, primarily on new supermarkets, remodeling existing stores, technology and the acquisition of shopping centers where Publix is the anchor tenant. It invested $1.06 billion in cap-ex during the first nine months of 2017.

Among the store openings planned for the remainder of 2017 are two in North Carolina (Clemmons and Fayetteville), two in Florida (Aventura and Crestview), one in Midlothian, Va., and one in Pooler, Ga., according to the retailer’s website.

Karen Short, an analyst with Barclays Capital, said that based on the hurricane’s impact on Publix’s sales, the storm may have boosted Walmart’s comparable-store sales by 10 to 20 basis points in the third quarter. Walmart is scheduled to report its third-quarter results later this month.

Another impact of the hurricane that could unfold over the longer term is the influx of people to Florida from storm-ravaged Puerto Rico, said John Crossman, president of Orlando, Fla.-based real estate firm Crossman & Co., who noted that the state overall has been booming. Last year was the state’s biggest ever for visitors on vacation, he said, and the influx of new residents is expanding beyond retirees.

“I think the recent events in Puerto Rico are going to ramp that up even more,” said Crossman. “I think people are move here, get jobs, and start jobs and families, and they are going to stay here.”