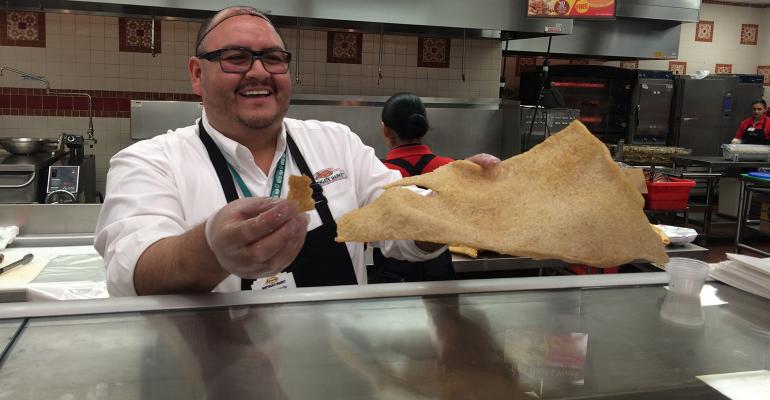 Becky Schilling
Ethnic independents have cultivated a reputation for authentic food experiences sought by their target shoppers and the generation population as well.
News>Retail & Financial

The rise of the ethnic independent

Ethnic and mainstream foods have increasingly converged as consumers of all backgrounds become more exposed to the cuisines of the world through cooking shows, social media and the growing presence of globally influenced foodservice offerings.

The appeal of these foods is further bolstered by the growth of ethnic populations in the U.S., which is outpacing that of the Caucasian population.

For ethnically oriented independents and small chains, the opportunities have never been greater. Operators expanding to other locations adjust their offerings to individual neighborhoods, understanding that even Hispanic culture “is very diversified.”  (Photo: Becky Schilling)

“There’s tremendous opportunity, because the data we are seeing tells us that Spanish-speaking shoppers represent over three-quarters of the total population growth in the U.S.,” said Burt Flickinger, managing director, Strategic Resource Group, New York. “When you include Asian-Americans and African-Americans, it is virtually 100% of the U.S. population growth.”

According to a recent Pew Research Center analysis of population data estimates from the U.S. Census Bureau, people of Asian descent had the highest growth of any ethnic group in 2017 at about 3%, followed by Hispanics at 2% and African-Americans at about 0.9%. The white population declined about 0.1%.

It all adds up to a positive outlook for operators that meet the needs of these consumers with the right mix of product and service. Many ethnic operators that have honed their expertise serving a core demographic group have expanded to multiple locations, adapting their offerings to the individual neighborhoods they serve. This experience has primed them to be destinations for consumers of all demographic groups seeking authentic ethnic offerings.

Minneapolis-based wholesaler Supervalu is betting on the success of ethnic independents. The company cited the Hispanic expertise of both Unified Grocers and Associated Grocers of Florida as a key impetus for its acquisition this year of the two cooperative wholesalers, based in Commerce, Calif., and Pompano Beach, Fla., respectively.

“We’re obviously investing significantly in the Hispanic market and in people’s desires to have different types of food and authentic food,” said Mark Gross, president and CEO, Supervalu. “This is a core strength of our customers, and I see us building on that going forward.” Among Northgate Gonzalez Market’s attractions is its chorizo, an old-style pork sausage with a Mexican twist. (Photo: National Pork Board)

Among the jewels of the AG of Florida network that Supervalu acquired is AG’s largest customer, Sedano’s Supermarkets, which has been growing rapidly to serve the burgeoning Hispanic market in Florida.

Sedano’s was founded in 1962 in Hialeah, Fla., as a family-owned neighborhood grocery store offering authentic Hispanic products. It has since expanded to 34 locations in central and southern Florida, in part through the acquisition of several former Albertsons locations in the Orlando area.

Supervalu’s AG of Florida acquisition, combined with its purchase of Unified earlier this year and its expansion in the Chicago area through the acquisition of an Illinois warehouse from Central Grocers, has created the framework for a nationwide ethnic and specialty food distribution operation that the company said it plans to ramp up in the coming year.

The wholesaler plans to leverage the Market Centre specialty products division it picked up as a part of the Unified acquisition to expand the availability of ethnic product to its independent and chain customers throughout the country. Market Centre includes a Hispanic-product sourcing center in Southern California, through which Unified had built up a sizable base of chain and independent members serving that niche.

“Unified’s retailers operate some of the industry’s most exciting and responsive Hispanic and other ethnic formats,” Gross said at the time of the Unified acquisition.

Among the former Unified members that are now customers of Supervalu is Vallarta Supermarkets, which began in 1985 as a small meat store serving the Hispanic customer base in Southern California and has expanded rapidly in the last 30 years.

The company, known for its authentic Hispanic offerings that include extensive prepared foods, authentic in-store bakeries and store-made tortillas, recently opened its 50th location in Pasadena, Calif. The store, formerly a Safeway-owned Vons store, underwent an $8 million renovation that included a new, contemporary design that showcases Vallarta’s expertise as a Hispanic retailer. The store marks a new beginning of sorts for the banner, as it seeks to broaden its appeal to a more diverse customer base.

“The main focus essentially is the Hispanic [customer], but the Hispanic culture is very diversified, and you’ll also find that other ethnicities are attracted to that type of food as well,” said Kurt Erickson, chief operating officer, Vallarta.

“We also try to cater to the ethnicities from the South Pacific, from various places in South America and even some areas of Europe that are interested in certain produce items or certain meat cuts or different bakery items,” he said.

For that reason, the banner often carries produce, meats and other products that may not necessarily be traditional Hispanic items but satisfy the preferences of the consumers in the area. Once they are in the door, these customers may be enticed to sample the authentic Hispanic fare that Vallarta has to offer, such as store-made tortillas made from scratch using actual corn rather than corn flour, or the carne asada (grilled meat) that the banner is known for.

“We try to cater to the actual neighborhood itself,” said Erickson. “In a particular area, we may have a stronger presence of Filipinos, and in other areas we may have more African-Americans. We try to ensure that not only do we have a good representation of team members in the store from the community that we serve, but we are also cognizant of carrying items that appeal to those ethnicities.”

In much the same way that Sedano’s has expanded in Florida through the takeover of locations where Albertsons closed, several of Vallarta’s stores are former chain stores that failed to adapt to the evolving demographics of the region.

“We were small enough and light on our feet to be able to adapt to a community and cater to it and market to it and actually advertise to it specifically,” said Erickson.

Other than the acquisition of a handful of former Pro’s Ranch Markets a few years ago, most of Vallarta’s growth has been organic, either ground-up construction or the takeover of existing buildings.

Vallarta’s successful expansion mirrors that of other ethnic banners in the region, such as Superior, Northgate Gonzalez Markets, El Super and others around the country that in many cases began as single-store operations. “They often started as green grocers with a few hundred square feet or at most a few thousand square feet,” said Flickinger of Strategic Resource Group. “Essentially, they were tiny little neighborhood green convenience stores, selling produce and limited groceries serving the neighborhoods, and when the [big chains] pulled out, the Spanish-speaking and Asian and Asian-American independents really kept capitalizing on the opportunity.”

In the New York area, independents such as Food Bazaar have also expanded by serving a broad range of demographic groups — what Flickinger described as a “United Nations” of consumers. Food Bazaar, founded by Korean immigrant Francis An, prides itself on operating in underserved communities and offering authentic product that the local population is seeking.

“We pride ourselves on going to great lengths in order to provide each of the communities that we serve with the flavors that they love and recall from ‘back home,’” the company says on its website.

It now operates 25 locations in the New York Metro area, most of which include extensive service seafood departments and full-service meat counters in addition to a wide selection of both international and mainstream grocery offerings.

“We take the time to learn the intricacies of the many cultures that we serve,” the company says.

The Key Food co-op, based in New York, also has several independent members that serve a variety of ethnic communities in the region. One location in Jackson Heights, Queens, a former Waldbaum’s store that Key Food acquired through the A&P bankruptcy and reopened as a Food Universe in November 2015, has been remodeled and remerchandised to serve the ethnically diverse population of the area. The remodel included new lighting, new floors, new refrigerated cases, a new front entrance and updated signage and décor.

“We have also remerchandised the store to now include all kinds of ethnic product, from halal foods, Greek, Filipino, Italian and all types of Spanish foods, just to name a few,” said George Zadrima, corporate store director, who added that the store also offers a wide variety of specialty and organic products.

“We have had many successes in the store, but the biggest success would be the ethnic merchandising throughout the store,” he said. “We have gone out into the community so we could understand who our customer base is, allowing us to bring in new products that fulfill their everyday needs.”

The company also established a strong relationship with ethnic product vendors, he said, to ensure a supply of the products its customers were seeking.

“Knowing the community you do business in and what types of product your customers are looking for is the most important piece to building a relationship in the community — providing the best variety of product which fulfills the needs of all ethnicities,” said Zadrima.