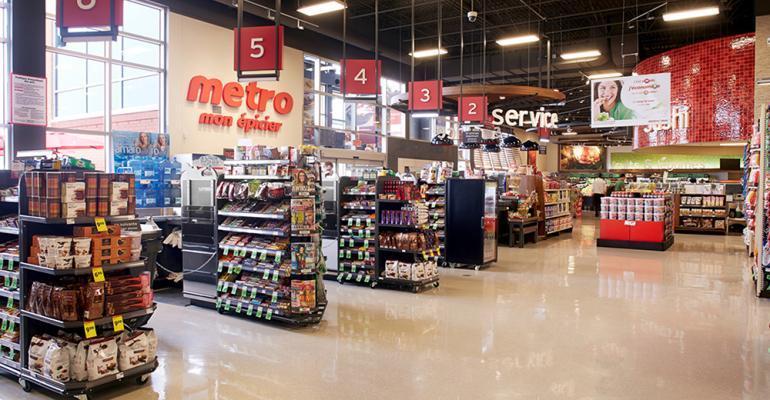 Metro Inc.
Metro said overall sales rose 0.9% in the fiscal 2022 first quarter but were up 7.1% on a two-year basis.
News>Retail & Financial

Sales at Metro edge up in first quarter

In the 12 weeks ended Dec. 18, sales totaled nearly $4.32 billion (Canadian), up 0.9% from $4.28 billion a year earlier, Montreal-based Metro reported yesterday. Including a 6.2% gain from the fiscal 2021 quarter, sales were up 7.1% on a two-year stack, reflecting growth from elevated grocery demand spurred by the onset of the COVID-19 pandemic.

“Transactions were up in Q1 but are still below 2020. Average basket size was down versus last year but remains significantly higher than two years ago,” Metro President and CEO Eric La Flèche told analysts in a conference call. “For the quarter, our internal food inflation was 3.5%, up from 2% in the prior quarter, driven by the meat and grocery categories. Promotional penetration has increased, as consumers manage their budgets in this inflationary environment, and I assure you that our merchandisers are working hard to continue to provide great value to customers in all of our banners. 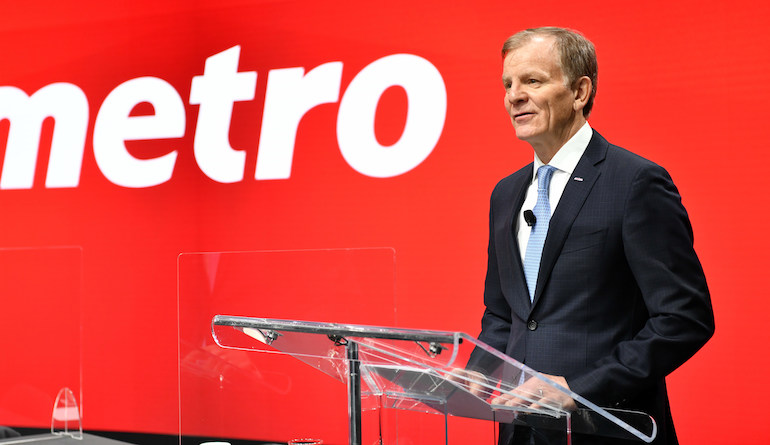 'We expect in the short term our food sales to remain relatively flat versus last year, but to compare favorably to pre-pandemic levels,' Metro President and CEO Eric La Flèche said. The company also held its annual shareholders meeting on Thursday.

“Since the end of the quarter, the spread of the Omicron variant has impacted our operations and those of our suppliers, putting pressure on our supply chain,” he added. “Our team has worked in collaboration with suppliers to mitigate the impacts. And as more people return to work at our suppliers and in our operations, overall supply-chain pressure has started to ease.”

Comparable pharmacy sales in the first quarter grew 7.7%, compared with 1.3% a year ago. The gain reflects a 7.1% uptick in prescription drugs, driven by more doctor’s visits, and an 8.9% increase in the front end, fueled by strong over-the-counter medicine sales — namely cough-and-cold products — plus a comparison to lower sales last year from the Jean Coutu distribution center labor dispute, according to Metro.

Online food sales were flat in the 2022 first quarter versus a 170% surge in the 2021 quarter, resulting in growth of 167% on a two-year basis. Metro is driving e-commerce expansion through a “hub store” model, in which selected locations are adapted to serve as fulfillment points for online grocery orders in the surrounding area.

“We continue to deliver against our plan, with 185 Metro stores now offering click-and-collect across the provinces of Quebec and Ontario, 14 hub stores offering delivery service and one dedicated facility in the high-density Montréal market,” La Flèche said. “We have recently launched a two-hour express delivery service on metro.ca in the greater Montréal and Toronto areas, and we'll roll out the service to more stores in Quebec and Ontario over the coming months.”

Pharmacy has become a bigger part of Metro’s online offering as well. “We also started offering the click-and-collect service in addition to our existing delivery service in pharmacy in mid-November, and now more than 270 pharmacies offer this service across Quebec, Ontario and New Brunswick,” said La Flèche. “We believe our flexible e-comm model positions us well to meet consumer demand as it evolves.” 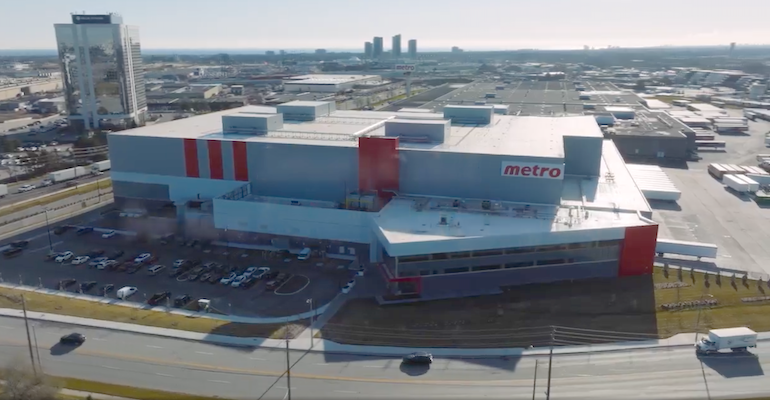 Analysts, on average, had projected adjusted EPS of 85 cents, with estimates ranging from a low of 84 cents to a high of 88 cents, according to Refinitiv.

“The transition to the new facility is under way and will gradually ramp up over the next few months. In Quebec, construction of the new fresh and frozen automated facility in Terrebonne is on track and scheduled for a 2023 opening,” he said.

“Looking ahead, while we can’t predict exactly how the pandemic will evolve, we expect in the short term our food sales to remain relatively flat versus last year, but to compare favorably to pre-pandemic levels,” La Flèche added. “In our pharmacy division, we expect strong comparable sales in the second quarter, as we are cycling six weeks of government restrictions on the sale of nonessential goods in Q2 last year.”

“Twelve weeks into fiscal 2022, capital expenditures amounted to $141.5 million. That’s up $51.6 million versus last year, and the higher level of capital expenditures is a result of our ongoing investments in the modernization of our supply chain in both provinces and in our retail store network, including in-store technology as well as the increase in our online capacity,” Thibault explained. “The amount also includes the purchase of a prime real estate property in Ottawa, where we operate a Metro store. At the end of the first quarter, we had 360 stores equipped with self-checkouts and 109 stores with electronic shelf labels.”