Scenes from the Market Basket rally

A crowd estimated at more than 2,000 gathered at Demoulas Super Markets' Tewksbury, Mass., headquarters Friday to call for a return of Arthur T. Demoulas, who was fired as president by the company's board of directors late last month. The protest followed an unfulfilled deadline Thursday set by some employees to return Demoulas to his role. Based on local accounts the majority of protestors worked at the retailer's headquarters building and warehouses. Workers' famililies also loaned support:

There were no reports of store closures, but many bore creative signs of support for Demoulas, like this one in Wilmington, Mass.:

As reported previously in SN, the company's new co-CEOs told workers Thursday that they were arranging a meeting between employees and the board of directors to discuss their demands. The board is also expected to address worker concern at a regularly scheduled board meeting Monday. Below, a worker at the rally displays an iconic image of Arthur T. Demoulas (photo courtesy of Christa A. Lamb) 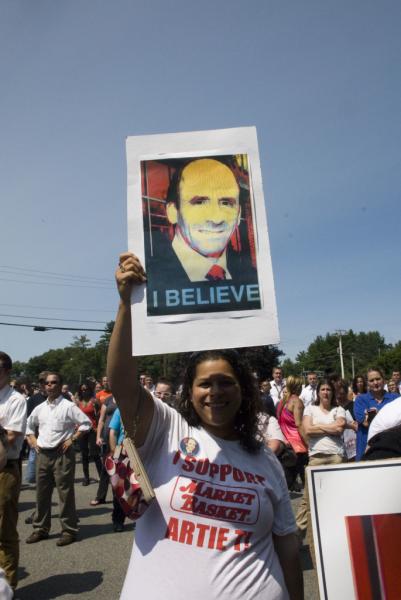