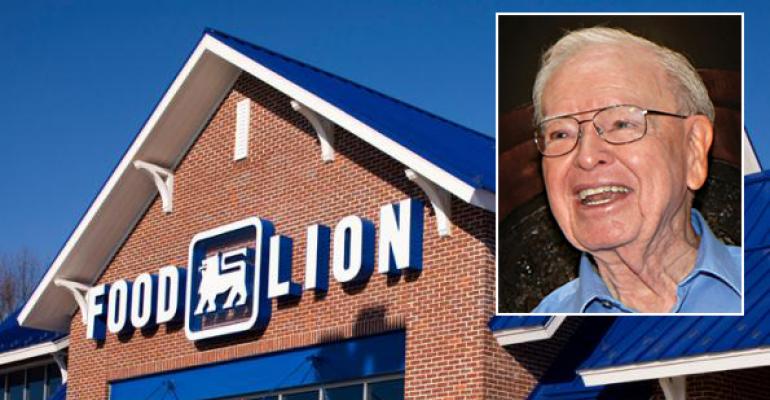 Services will be held June 5 in Salisbury, N.C., for Ralph Ketner, a co-founder of the company that became known as Food Lion and an industry pioneer whose stores introduced "everyday low pricing" in groceries.

Ketner, who was 95, passed away Sunday, according to the Salisbury Post newspaper. He was diagnosed with colon cancer earlier this year.

A son of a butcher, Ketner was a World War II veteran, and co-founded Food Town in 1957 with a brother, Brown Ketner, and a friend, Wilson Smith. He had previously served as a bookkeeper for a Winn-Dixie-owned grocery store run by another brother, Glenn.

Ketner said that Food Town overcame early struggles when it ceased being a "me-too" grocery store and in 1968, adopted what was then a radical strategy of offering low prices every day, making smaller profits on higher sales volume.

Known then as LFPINC ("Lowest Food Prices in North Carolina") the strategy was among the earliest and most successful implementations of what today is known as the EDLP strategy.

“What I did was take six months of invoices, and went to a Charlotte hotel with an adding machine and a card table — I'm extremely good with arithmetic,” Ketner wrote in his autobiography, "Five Fast Pennies." “Our calculation was we had to have a 50% increase in order to break even, otherwise we were bankrupt. And we went from $5 million [in 1967] to $9 million [in 1968], which was an 80% increase. The following year we went to $15 million, the following year $22 million, the next year $36 million. So in four years we grew 7.4 times.”

“We had to operate a whole lot more efficiently, and we did. We had a reputation for being the leanest and meanest in the country.”

The strategy triggered rapid growth for Food Town, making millionaires of 122 early investors that Ketner said he found going through a local phone book. Eventually its success attracted the attention of Belgium's Delhaize Group, which invested in the chain in 1970s and later changed its name to Food Lion.

He remained an outspoken champion of the chain and its practices while maintaining an office at Catawba College in Salisbury, where the college’s business school is named in his honor. He was inducted to the SN Hall of Fame in 2011.

Services will be held on Sunday, June 5, 2:30 p.m., at Keppel Auditorium on the Catawba College campus.