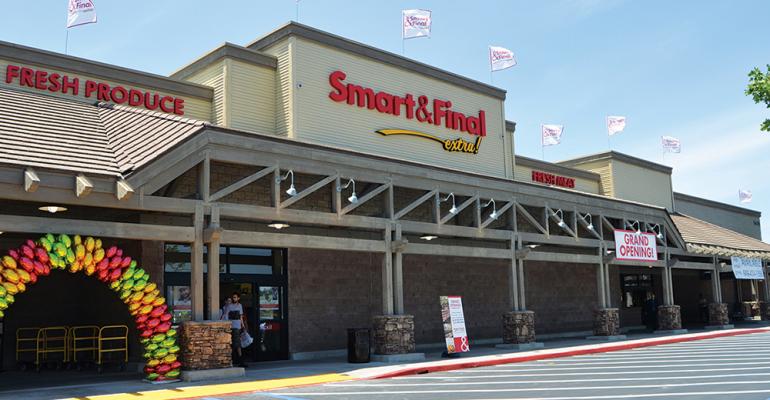 Record number of store openings in 2016

The Commerce, Calif.-based warehouse-style retailer reported a loss of $300,000 for the 12-week period, which ended Jan. 1, after expenses for new-store openings, three store closings and other factors. Net income in the year-ago period, adjusted for an extra week a year ago, was $10 million.

Sales totaled $1 billion in the period, up 9.2% over year-ago fourth-quarter sales, also adjusted for an extra week in fiscal 2015. Sales growth was driven by new stores, partially offset by a 2% decrease in comparable-store sales.

“The good news about deflation, if there is any, is that it’s not nearly as widespread as it was in the early parts and middle of last year,” said Dave Hirz, president and CEO, adding that the company is projecting deflation to abate in the “middle of the year.”

The company opened 33 Smart & Final Extra! stores in 2016, converting a group of supermarkets it had acquired from Haggen. It finished the year with 305 stores, including 172 under the Extra! Banner, 74 legacy Smart & Final locations and 59 Cash & Carry units.

“I know the cannibalization was painful this year, but we still think it’s a good tradeoff,” said Hirz. “We would do it again tomorrow.

“When you can double your store presence in a really critical area like San Diego from 13 to 27 stores, and the type of density we now have in [Los Angeles] and the Central Coast, it is really working well for us. It’s helping with our messaging, our branding, our marketing.”

Going forward, the company expects to continue to grow new stores at a pace of about 10% annually, but the stores will be more spaced out geographically, he said.

John Heinbockel, an analyst with Guggenheim securities, lowered his price target on Smart & Final shares after the earnings report, to $16 per share, from $17, and maintained a “buy” rating, according to a StreetInsider report.

“Both cannibalization and deflation should dissipate over the next year, with the old secular algorithm — 10%-plus sales and EBITDA growth — reappearing,” he was quoted as saying.

Smart & Final also carries the First Street private label, which comprises about 78% of its total private label sales, and Simply Value, an entry-price-point brand that comprises 6% of private-label sales.

“Most of the innovation in 2016 went into First Street and Sun Harvest,” said Hirz, noting that Sun Harvest generates higher margins.

“We used to say we had a 600-point incremental margin in private label, [but] that gap is now 750 points, and a lot of that is really being driven by the growth of Sun Harvest,” he said.