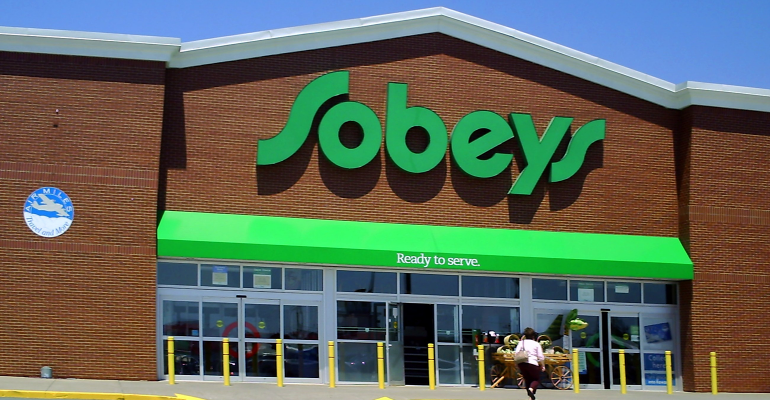 Sobeys is seeking to become the dominant provider of grocery e-commerce in Canada through its partnership with Ocado Group, the retailer’s top executive said in a conference call with analysts Tuesday.

“Our exclusive Canadian partnership with global e-commerce leader Ocado will give us the best strategic and sustainably profitable e-commerce infrastructure in Canada, positioning us to thrill our customers and take customers from our competition,” said Michael Medline, president and CEO of Stellarton, Nova Scotia-based Sobeys and its parent, Empire Co.

Ocado, based in the UK, leverages robotics and other technologies to offer warehouse-based delivery services for retailers in Europe. Its partnership with Sobeys, announced in January, marks the company’s first foray into North America.

Sobeys said it plans to begin delivery in the spring of 2020 from a new customer fulfillment center that Ocado is building in Vaughan, Ontario, near an existing Sobeys warehouse.

Medline said a fulfillment center of similar size that Oacado operates in the UK has capacity of about $500 million.

The company plans to launch the service in the greater Toronto area before rolling it out to other markets across the country. Although Sobeys currently offers grocery delivery from store-picked orders in some areas, it said it views fulfillment-center based distribution as a better long-term solution.

“On e-commerce, I see this as a marathon, and we're in the first hundred meters,” Medline said. “We made the decision to go for the win rather than a short-term answer.”

The company reported an internal inflation rate of 1.6% in the quarter, suggesting some traffic erosion and a 0.5% decline in “real” same-store sales, said Irene Nattel, an analyst with RBC Capital Markets.

She also noted that Sobeys has “another two quarters of relatively easy comps ahead.”

Gross margins were up 30 basis points in the quarter, to 24% of sales, which Sobeys attributed in part to improved store execution and promotional strategies.

Sobeys said it was seeing some heavier promotional activity from some discount grocers in Canada, and it was also feeling an impact from Loblaw’s distribution of $25 gift cards to compensate for what Loblaw had described as a bread price-fixing scheme it uncovered.

“We had good comps this quarter as we benefited from inflation and better execution through better blocking and tackling,” said Medline, citing a strong holiday season, better service levels from warehouses to stores and improved merchandising, store execution and marketing.

“Of course, we're not out of the woods yet,” Medline said. “We're still in the riskiest phase of transformation, but the long-term gain we're looking forward to is well worth any short-term bumpiness.”

He said the company has largely completed its organizational restructuring, which resulted in corporate staff reductions and a realignment of merchandising teams to operate more centrally. The company also made progress on tackling the poor performance of its Western division, which included the Safeway stores acquired from Pleasanton, Calif.-based Safeway in 2013.

In the most recent quarter, Sobeys said it would close 10 of those locations. It plans to begin to roll out its discount banner FreshCo to the Western region within the next nine months, pending negotiations with labor unions on revamped contracts for the FreshCo banner. Some of the closed locations could be converted to the discount format, Medline said.

Analysts have been supportive of the company’s efforts to expand its presence in the fast-growing discount grocery segment.

“Although Sobeys enjoys a solid position in the traditional food retail segment in Western Canada, Quebec and Atlantic Canada, the company’s underrepresentation in the growing discount sector presents a significant challenge,” Nattel of RBC Capital Markets said in a report.