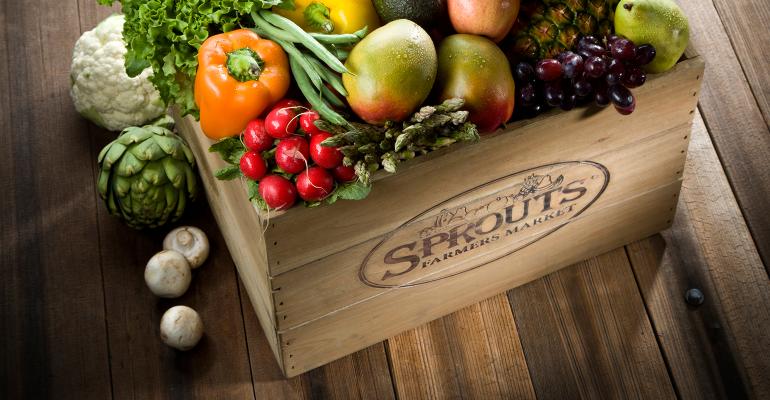 Sprouts Farmers Market said comparable-store sales were up 4.6% in the recently ended fourth quarter and that earnings for the full year would be “slightly above” previously announced guidance.

“Business was very good during the holidays,” said Amin Maredia, CEO, at the ICR Conference on Tuesday.

The Phoenix-based company announced the preliminary results late Monday ahead of the ICR Conference presentation on Tuesday morning.

Maredia said he sees continued opportunities for growth in the year ahead, given Sprouts’ foundational positioning around both health and value.

“There are almost 30,000 conventional food retail stores in the country, [and] I think there will continue to be shakeout of the weaker players in the space, which will bring share to market,” he said.

Asked about the impact of tax reform, Lukow said the company expected to be able to reward shareholders by investing excess cash flow in stock buybacks. The company had previously rolled a compensation strategy to retain workers in key positions, and does not foresee a “step change” in that regard. Tax reform also is not expected to impact the company’s price investments or store-development plans.

Maredia noted, however, that competitors’ responses to tax reform could influence Sprouts’ investments in labor and pricing.

Also on Tuesday, Sprouts said it has reached an agreement with Instacart to roll out home delivery to Sprouts’ major markets. Instacart already partners with Sprouts in eight cities around the country, offering same-day delivery or delivery scheduled at a future date. The expanded service launched Tuesday is certain ZIP codes in the Phoenix and Tucson, Ariz., markets.

Maredia said delivery will allow the chain to reach more customers, especially given that its natural/organic stores are often spread further apart than conventional competitors.

“Most people shop within five to seven minutes of where they live,” he said. “This allows us to capture customers outside that seven-minute trade area.”

Sprouts also has a delivery relationship with Amazon Prime Now, which began last year with a 10-store test and was expected to expand to 20 stores, including the Atlanta market, by the end of last year. Maredia declined to comment on the Amazon partnership when asked by an analyst at the ICR Conference.

Sprouts is also rolling out technology systems to enhance efficiency in 2018, the company said at the conference.

Among those is what Lukow described as a “best-in-class, cloud-based” solution for ordering that is being deployed across all fresh categories and is integrated with demand forecasting. The system is expected to improve in-stock conditions and decrease shrink that arises from overstock, he said.

“A number of us across the executive team have implemented this type of solution in past lives, and we really understand the size of the opportunity,” Lukow said.

The solution will also be integrated with labor scheduling and production planning, which is expected to help improve freshness in the chain’s burgeoning deli and prepared-foods areas, as product is prepared throughout the day according to demand.

The systems will be rolled out throughout 2018 and are expected to yield run-rate savings in 2019, Lukow said, noting that Sprouts is playing catch-up in this area.

“Most of our competitors have implemented these types of solutions years ago,” he said.

Lukow noted that Sprouts’ expansion of its deli business has been driving increased traffic to stores, especially around lunch and dinner times, while also putting pressure on the average ticket because of the smaller purchases in the deli area.

The smaller purchases are offsetting to a degree the larger baskets being driven by private label, which has been growing at a 30% rate the last two years, the company said. Private label currently accounts for 12% of the chain’s sales.