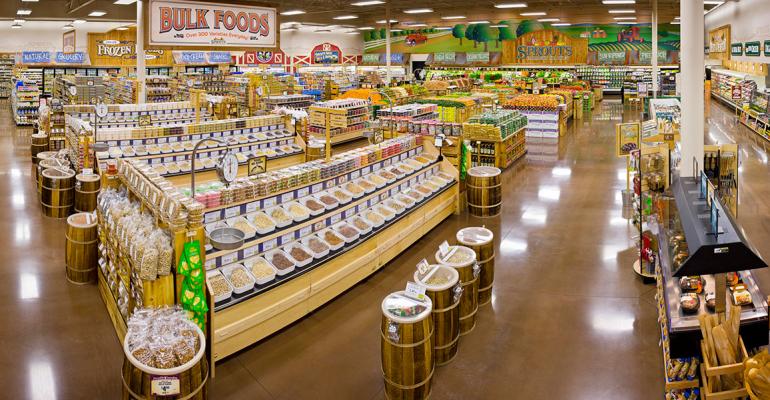 In discussing quarterly sales strength that took many by surprise, officials of Sprouts Farmers Markets on Thursday made a point that the retailer’s fortunes ride on something more than just the prevailing price of produce.

Specifically, CEO Amin Maredia highlighted holiday meal promotions that doubled sales in November as compared to last year and increased in the triple-digits during December.

The offerings included online ordering of Thanksgiving turkeys and complete meals that made the chain “a healthy holiday destination” with strong traffic gains. That helped affect a 7.4% fourth-quarter comp sales gain — a shock to a market expecting something less given slow inflation in fresh produce.

“While produce remains an important traffic driver, our merchandising and operations teams’ ability to drive sales growth across the store and all departments is really starting to differentiate Sprouts,” Maredia maintained during a conference call discussing results.

“No doubt the year had its challenges in produce and deflation,” he added, “but in true Sprouts form, our team worked tirelessly to deliver in all areas of the business.”

Buoyed also by company guidance for continued sales and earnings growth for the new fiscal year, Sprouts stock closed up by nearly 9% Thursday.

Maredia said the company this year would focus on investments to enhance product offerings, infrastructure and training. He said around 70% of Sprouts’ stores would get an enhanced deli program including prepared salads and food service cases, fresh juices and specialty coffee that were tested in select stores last year, adding that the company was continuing to look at improvements to home-meal replacements including better packaging.

“We believe these deli enhancements will increase our daytime traffic and bring more relevance to the shopping experience without adding a tremendous amount of capital to our new store build-out.”

Maredia added that private label would be another area of focus, citing customer surveys revealing shoppers associate the Sprouts brand with quality and taste. Private brands grew by 30% in 2015, he said and today account for more than 9% of total sales. “We believe this category has plenty of room to expand for years to come.”

Infrastructure investments include a plan to improve digital engagement with customers, and provide a business intelligence platform allowing marketers and merchandisers to better execute pricing and promotion, he said.

Also on Thursday, Sprouts said Brad Lukow was joining the company as its new CFO. Lukow, who will join the company March 4, has more than 20 years of experience in retail, including six years as CFO of Shoppers Drug Mart, Canada’s largest drug chain. Susannah Livingston had been serving as interim CFO since last summer when Maredia was promoted from CFO to CEO. Livingston will remain with Sprouts in her capacity as VP of investor relations and treasury.

Maredia was also named to the board of directors of Sprouts this week, replacing Andrew Jhawar, who resigned.