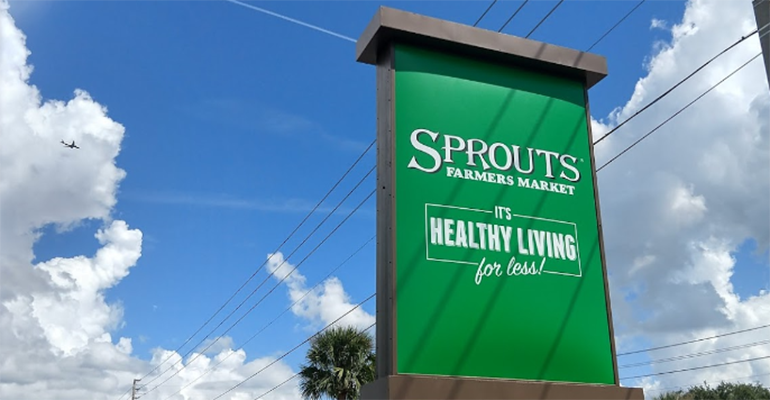 The upcoming departure of Sprouts Farmers Market CEO Amin Maredia reflects no problems with the company but simply a feeling that it’s time to try something different, Chief Financial Officer Brad Lukow said.

Sprouts announced last week that Maredia, CEO of the Phoenix-based company since August 2015, is leaving the company effective Dec. 30 “to pursue other interests.” Lukow and Jim Nielsen, president and chief operating officer, were appointed as co-CEOs as an executive search firm looks for a permanent chief executive. 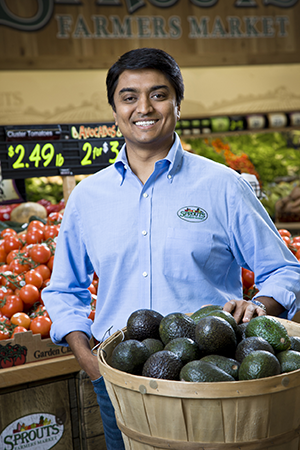 “Probably a little bit over a year now, Amin [left] has been thinking about what he wants to do next. He's had a tremendous run at Sprouts — highly successful. But at the end of the day, each one of us makes a personal decision around what we want to do with the rest of our life,” Lukow said Wednesday in a talk at the Barclays Eat, Sleep, Play — It’s All Discretionary Conference in Manhattan. “So he and I actually had that conversation about a year ago, that he was giving some thoughts about, and then I think just recently he had a conversation with the board and expressed that he really has a desire to move on and do something else.”

Maredia, a board member since February 2016, has agreed to serve in an advisory role to provide assistance with the leadership transition.

“The board's decision around time frame and how to move forward was [that] over the last few years, the company has been really successful in deepening the bench and the talent across the organization. And that really gave the board the confidence not only in the broad management team, but also Jim and I to carry on at this point,” Lukow said. “And the reality is, Amin is still around in an advisory capacity through March. So it's actually a good process in terms of the timing.”

Jefferies analyst Christopher Mandeville said his firm hosted a meeting and investor call with Sprouts’ management at the retailer’s headquarters on Nov. 30, the day Maredia’s resignation was announced. But Mandeville noted that the Jefferies team concluded that Maredia’s exit portends nothing negative and Sprouts’ business fundamentals remain unchanged.

“During our hosted investor call to discuss his planned departure, CEO Amin Maredia argued that there is no need to read further into his ‘personal change.’ There was no internal strife or cultural issues, and management and the board are well-aligned on priorities and strategy,” Mandeville wrote in a Dec. 3 research note. 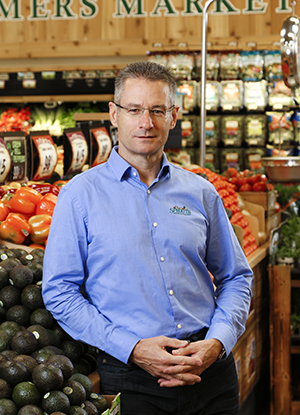 Retail veterans Lukow (left) and Nielsen are potential successors, Mandeville reported. “According to management, the reason for the co-CEO structure between the CFO and president and COO stems from Mr. Lukow's and Mr. Nielsen's focus on different, cross-functional areas of the business: the former on real estate and IT, the latter on marketing and e-commerce,” he said. “While executive searches can take upwards of six months, Sprouts indicated that much depends on the board's ability to find the ideal candidate, preferably with prior experience in the specialty food and/or broader grocery space.”

Maredia signed a three-year deal in August 2015 to serve as CEO, including one-year options and a non-compete provision that prohibits him from joining any company that engages in, operates or owns a natural, organic or specialty grocer, Mandeville said. The non-compete clause is for one year, according to Luko.

“During the call, Mr. Maredia stated that he currently has nothing lined up as it relates to a new opportunity and that he will spend his remaining days focused on business development and partnerships, prior to transitioning into an advisory role,” Mandeville added.

At the Barclays conference, Lukow commented that Maredia is “leaving on a high note.” Indeed, Sprouts reported in early November that third-quarter revenue climbed 10.2% to $1.33 billion, and same-store sales grew 1.5% year over year. Two-year comparable-store sales were up 6.1%, and reported earnings per share of 29 cents topped Wall Street’s consensus forecast of 26 cents. Sprouts also raised its EPS guidance for the full 2018 fiscal year.

“It's important to also point out there was no disagreement between Amin and the board on the strategic direction of the company,” Lukow said. “There's no change in any of our initiatives or our focus areas as we look to 2019.”

That includes a new store prototype — introduced in Philadelphia and now at five locations — featuring an enhanced meat and seafood presentation in the deli area that showcases meal solutions for customers.

“We know, historically, that we have not really strongly drawn the Millennial generation into our stores.  I can tell you, based on these five first stores, that we are attracting strongly all age demographics,” Lukow said. “The whole move into enhanced deli in the stores over the last number of years, where we've got seating areas, is much more trend-forward in terms of the customer coming in and seeing us at 12 o'clock and 5 o'clock to have a lunch or dinner ready-to-eat product.”

In 2019, Sprouts plans to open 30 new stores, and nine of which will have the enhanced deli presentation. “So roughly a third of the stores will have the new format in 2019, and we're really excited about the fact that in 2020 and beyond that is our new format,” said Lukow.

The retailer also expects further growth in online grocery through its partnership with Instacart, whose delivery service is now available at 207 Sprouts stores, according to Lukow.

“We are seeing really strong growth Instacart home delivery sales. While it's small as a percentage of the business, we're seeing a pretty strong percentage increase, and we've already eclipsed the level that we're at on the Amazon network. So we're pretty excited about how that will continue to grow,” he said. “I think part of that is because we've got a lot of years of experience in how to execute that, and the team within Sprouts has done a fantastic job working collaboratively with the stores and with Instacart to make sure if you order 20 items, you're getting the 20 items that you ordered. When you think about the fresh side of the business, we turn produce every three days, [so] you're guaranteed that you're going to have fresh products. So I think for those reasons, it's really been something that has ramped up quickly and exceeded our expectations.”