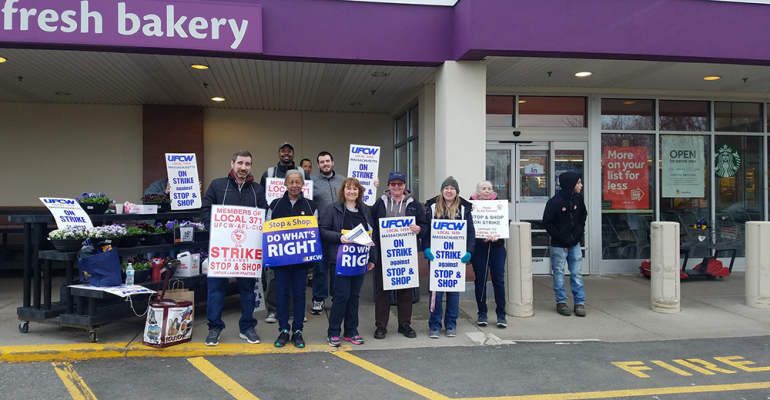 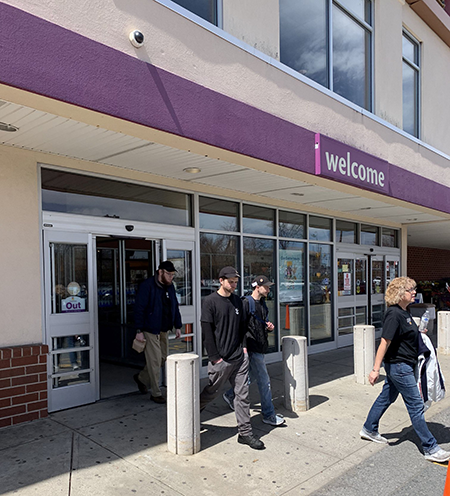 When the strike began on Thursday, stores were forced to close and customers were instructed to leave, published reports said. A Stop & Shop spokeswoman said that most of the chain's New England stores reopened on Friday with reduced hours, from 8 a.m to 8 p.m., and all in-store pharmacies and banks remain open, even if a store is closed.

“This is a challenging time, but I want you to know that I and the entire Stop & Shop team remain firmly committed to getting a fair new contract in place for all of our associates in New England,” Stop & Shop President Mark McGowan said in a statement Friday. “Our team is standing by and remains ready to continue negotiations anytime. We hope that the UFCW local unions return to the table to reach a fair and responsible contract now.”

The five UFCW locals, whose current contract expired Feb. 23, have been engaged in negotiations for a new contract with Stop & Shop since Jan. 14. The impasse centers on what the union calls unreasonable cuts in pay and benefits versus what Stop & Shop describes as a fair offer in a rapidly changing grocery market, especially rising competition from non-unionized retailers.

On Sunday, the locals posted a petition on the UFCW website calling for public support and urged customers not to cross the picket lines to shop at Stop & Shop stores in New England, pointing them to other UFCW-unionized stores such as Shaw’s, Acme Markets, Fairway Market, Kings Food Markets, Food Bazaar Supermarket and Brigido’s Fresh Market.

“This massive worker protest comes in response to months of negotiations with Stop & Shop in which the company has refused to back down from proposals attempting to cut workers’ health care, take-home pay and retirement benefits,” the five UFCW locals said in a statement Sunday. “Stop & Shop is the No. 1 grocery chain in New England. It is a subsidiary of multinational company Ahold Delhaize, which reported more than $2 billion in profit last year. This is not a company in financial trouble.”

Among the points at issue, the UFCW locals said, Stop & Shop is offering a 30-cent hourly wage increase for part-time workers that wouldn’t offset its proposed cuts. Those include the elimination of Sunday and holiday pay for part-time employees; a hike in weekly premium costs for employee-only health care coverage by up to 90% over three years; and a doubling of out-of-pocket limits for many employees, from $1,000 to $2,000 for individuals and from $2,500 to $5,000 for families, they said.

“At the same time the company was demanding workers pay more for health care and lose Sunday and holiday pay, Ahold authorized $880 million in dividend payments to shareholders from 2017 to 2019. Ahold also recently received $217 million in corporate tax cuts. Amongst other actions, the company unlawfully refuses to provide financial information to verify its claim that their proposed cuts are necessary,” the locals stated. “Instead of investing in the workers who made the company successful and who take care of their customers, Stop & Shop is trying to stiff them.”

The union also said Stop & Shop’s proposal would reduce monthly pension benefits. The locals, too, described the retailer’s efforts to deploy more self-checkout stations in stores as a threat to jobs.

“UFCW’s five New England locals are unified at the negotiation table and are asking for Stop & Shop to properly value the employees whose hard work and dedication have made their company so successful,” the locals added.

Stop & Shop reiterated on Friday that its wage offer to the five locals would make the proposed UFCW retail contract among the best in the nation. The Quincy, Mass.-based company said the offer includes no changes to Sunday time-and-a-half premiums for full-time workers, and current part-time staff would keep their “current Sunday premium dollar amounts.”

In addition, Stop & Shop said its proposal wouldn’t change health insurance deductibles — which the company noted “already are well below average” — and workers’ share of health coverage premiums would “remain well below national averages,” rising $2 to $4 per week each year. The retailer also said its proposal would continue all current, vested pension benefits and raise company pension fund contributions.

“Our offer provides pay increases for all associates, excellent health coverage with deductibles that would not change, increased contributions to the employee pension plans and no changes in paid time off or holidays for current associates,” according to McGowan. “Importantly, the offer also maintains a responsible balance in rewarding our associates, protecting jobs and serving our customers in a dramatically changing, mostly non-union environment.”

In a fact sheet on its labor new website, Stop & Shop highlighted the threat of non-union competition. The company, which has 412 stores overall throughout the Northeast, reported market shares of 77% and 68%, respectively for eastern Massachusetts/Rhode Island and western Massachusetts/Connecticut/New York versus 21% for Stop & Shop in each of those regions.

“Stop & Shop is the only large fully unionized food retailer left in New England. Our labor costs are having a major impact on the company’s ability to compete in a fundamentally changing market,” Stop & Shop said in the fact sheet.

The company cited Shaw’s, Acme and ShopRite as unionized competitors in the market area.

Stop & Shop added that it recently has reached agreements with the International Brotherhood of Teamsters Local 25 for its New England distribution center and with UFCW locals representing store employees in New York.

“We want to get back to bargaining now on a new contract,” McGowan said in his posted remarks. “We all want to focus again on doing what we do best: taking care of our customers.”

Stop & Shop is currently engaged in a five-year, $2 billion program to upgrade all of its stores. The effort began last fall in Hartford, Conn., and stores in Long Island, N.Y., are next in line for the refresh this year. Plans call for 60 to 80 stores to be upgraded annually under the program, with total capital expenditures pegged at $1.6 billion to $2 billion. The chain operates locations in Massachusetts, Connecticut, Rhode Island, New York and New Jersey.