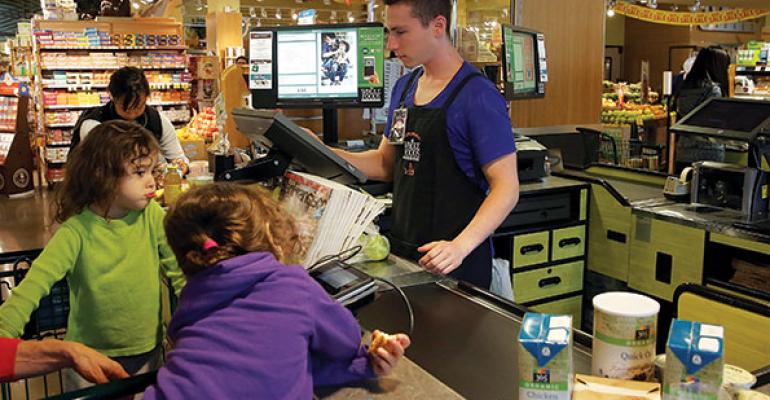 A trend toward increasing pay for front line workers has met a concurrent backlash at the home office.

No fewer than five large food retailers and wholesalers announced significant cutbacks in their support staff during the last month, not including those like Haggen and A&P where thousands of jobs in stores and at headquarters are vanishing as a result of bankruptcies.

A total of 2,455 jobs were cut in layoffs announced separately by Whole Foods (1,500 jobs), Southeastern Grocers (250), Wal-Mart Stores (450) and Dollar General (255). C&S Wholesale Grocers also announced a restructuring including job losses, but did not specify the number of employees affected.

While each company had issues unique to it triggering the reductions, they illustrate a trend toward retailers getting by with leaner support staffs, often to support investments elsewhere. Doug McMillon, CEO of Wal-Mart Stores, may have best expressed this sentiment when he told analysts earlier this year that “there are no cash registers at the home office.”

The workforce reduction — amounting to a 2.5% downsizing of Walmart’s 18,000 headquarters employees — had been anticipated since the company announced heavy investments in salaries and staffing for store-level employees earlier this year. Walmart is also spending heavily behind its e-commerce operations, with those expenses expected to continue to pressure earnings through next fiscal year.

“Our customers are changing, retail is changing and we must change,” McMillon said in a memo announcing the changes obtained by SN. “We need to become a more agile company that can easily adapt to shifting customer demand. After months of evaluation, we’ve concluded there is an opportunity to better position our Home Office teams to move with speed and purpose.

“This is an important time in our history — requiring all of us to think critically about our business and not be afraid to challenge the status quo. For the company, this in part means pulling back in some areas and investing in others.”

Impacted associates are being paid for 60 days with benefits and can apply for open positions, the company noted. Departing workers are receiving severance pay and have access to job placement services, Deisha Barnett, a Walmart spokeswoman, told SN.

At Whole Foods, the elimination of 1,500 jobs — approximately 1.6% of its workforce — will help the company as its wrestles with higher costs than competitors in the food retailing industry and invest in technology and lower prices.

The company in a filing with the Securities and Exchange Commission said it anticipates many of the reductions would be managed through natural attrition and that it expects “a significant percentage of affected team members will find other jobs from the nearly 2,000 open positions across the company or via new jobs created from the more than 100 new stores in development.”

Whole Foods, headquartered in Austin, Texas, said it added more than 9,000 new jobs in the past year and created nearly 35,000 over the past five years.

“This is a very difficult decision, and we are committed to treating affected team members in a caring and respectful manner. We have offered them several options including transition pay, a generous severance, or the opportunity to apply for other jobs. In addition, we will pay these team members in full over the next eight weeks as they decide which option to choose,” Walter Robb, co-CEO, said in a statement. “We believe this is an important step to evolve Whole Foods Market in a rapidly changing marketplace.”

Analyst Bill Kirk of RBC Capital in a note to clients said the action “is a necessary step in Whole Foods’ evolution, and will not negatively impact its growth trajectory.”

Kirk noted Whole Foods’ selling, general and administrative expenses — around 28% of its sales — is well above peers like Kroger (19%) and Sprouts Farmers Market (23%).

Stung by the disintegration of A&P, C&S Wholesale Grocers confirmed it has laid off “a small percentage” of its workers in sites throughout the country.

In a statement provided to SN, the Keene, N.H.-based wholesaler also cited changing consumer buying patterns and retail channel shifting for triggering the restructuring. The changes are not expected to result in the closing of any of C&S’s facilities.

“As a family-owned company, we recognize the impact this restructuring will have on our employees and their families,” Rick Cohen, CEO, said in the statement.

“Unfortunately, the reality of our industry is that we have to make changes, including the difficult decision to restructure some of our core functions and reduce our workforce, to ensure the competitive strength of C&S going forward.”

A&P, which did retail sales of $5.5 billion in the fiscal year ended in February and bought approximately 65% of all its goods from C&S, declared bankruptcy in July and is selling off its stores, many to retailers with other wholesale agreements. C&S is also A&P’s largest creditor: It had $39.4 million in claims against A&P when it filed for protection in July. C&S is the nation’s largest grocery wholesaler with an estimated $24.8 billion in 2014 sales, according to SN’s Top 75.

In a separate event last month, C&S confirmed plans to close down two Maryland warehouses primarily supplying stores in Safeway’s Eastern division by Dec. 5. Business from those facilities is to be consolidated at other C&S sites in Maryland and Pennsylvania.

A source said the closure of the Maryland facilities was not related to the C&S restructuring, but to synergies sought by Safeway’s new parent, Albertsons Companies.

Southeastern Grocers said it laid off 250 workers at its support offices in a move that will help the parent of Winn-Dixie, Harveys and Bi-Lo chains improve efficiency and invest in service and value for customers, the company said in a  release.

The cuts took place at Southeastern’s Jacksonville, Fla., headquarters and at regional support centers throughout its seven-state footprint. Store employees were not affected.

Dollar General said that it was eliminating approximately 255 positions in its corporate support office as part of a broader initiative aimed at improving efficiencies and reducing expenses. The restructuring includes approximately 115 vacant positions. Positions at the store level will not be impacted, the company added.

“Over the last several months, we have taken a hard look at our cost structure and are streamlining our support functions to improve our financial flexibility while positioning us to better serve our customers and to capitalize on long-term growth opportunities. This restructuring should allow us to continue strengthening our market leadership position and deliver long-term value for our shareholders,” Todd Vasos, CEO, said in a statement.

Dollar General said it expected to incur a pre-tax cash expense of approximately $7 million in the third quarter relating to the restructuring for severance-related benefits.