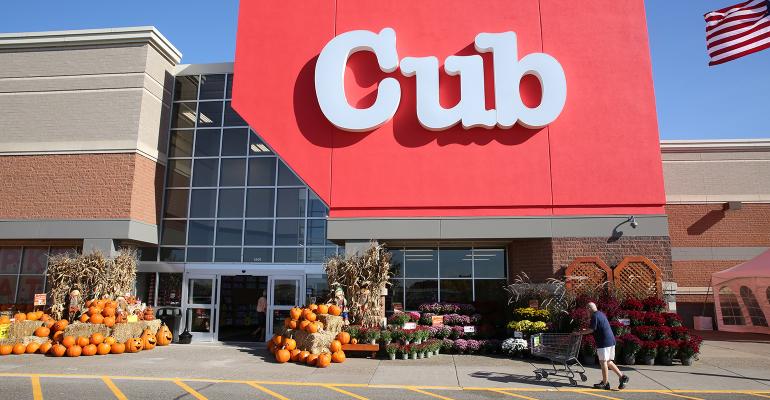 Cub Foods
Supervalu’s retail sales continued to struggle but the company is optimistic about recent initiatives such as remodels at Cub Foods.
News>Retail & Financial

A surge in volume around the holidays from new customers drove wholesale costs higher for Supervalu in its fiscal third quarter, the company said Wednesday in a conference call with analysts.

Although wholesale sales ramped up by nearly $1 billion in the third quarter, compared with a year ago, profitability in the segment declined as the company incurred costs at some of its warehouses related to the increased holiday volume. Costs included auxiliary warehouse space, added trucking capacity and employee overtime.

“Our focus in the quarter was continuing to invest in our wholesale business to provide our customers the products and services they needed for their shoppers, a philosophy with short-term cost implications,” said Mark Gross, CEO of the Minneapolis-based wholesaler.

He said the company expected to be able to work through the cost pressures, in part by utilizing newly acquired warehouse space in Florida and Illinois.

Earlier this week natural and organic wholesale United Natural Foods Inc. cited similar cost pressures from a surge in demand that outstripped the capacity of some of its facilities.

Third quarter wholesale net sales were up 52% in the most recent quarter, to $2.89 billion, primarily due to $860 million in sales from the acquired Unified business. Supervalu also saw sales gains from sales to new customers and increased sales to new stores operated by existing customers, partially offset by stores no longer operated by customers and lower military sales.

Excluding the added Unified business, Supervalu said its wholesale sales were up 6% in the quarter.

“That's pretty impressive given that we're now cycling the sales from the Marsh stores we're no longer supplying that were part of our numbers last year,” said Gross.

Excluding both the Marsh stores, which were sold to multiple operators through bankruptcy, and the additional sales from Unified, Gross said underlying wholesale sales were up about 10% in the most recent quarter.

Wholesale sales now represent 73% of total sales at Supervalu, up from 63% a year ago.

Supervalu completed its acquisition of Associated Grocers of Florida on Dec. 8, shortly after the Dec. 2 close of the third fiscal quarter.

Supervalu’s retail sales continued to struggle in the third quarter, with identical-store sales down 3.5%, including a 3.4% decrease in traffic and a decline in average basket size of 10 basis points. Overall retail sales fell 4.1% in the quarter, to $1.02 billion.

“Every asset has got to be productive, and we'll fully support and invest in those that will give a return to our shareholders,” he said.

Some new retail initiatives, including elements of recent remodels at Cub Foods stores in Minneapolis, have shown promise and could be expanded to other retail locations and offered to independent customers as well, Gross said. The company is also expanding its click-and-collect offering, and at the start of the third quarter began offering one-hour delivery via a new pact with Instacart throughout most of its corporate store base.

The company said it expects a non-cash charge of $35 million to $45 million in the fourth quarter to reduce the the carrying value of Supervalu's net deferred tax asset in accordance with the newly enacted tax reform legislation. Net earnings from continuing operations for the full year are expected to be in the range of a loss of $20 million to positive income of $2 million.

Asked about the benefits of tax reform in the future, Gross said the company would use the increased cash to pay down debt and invest in operations.