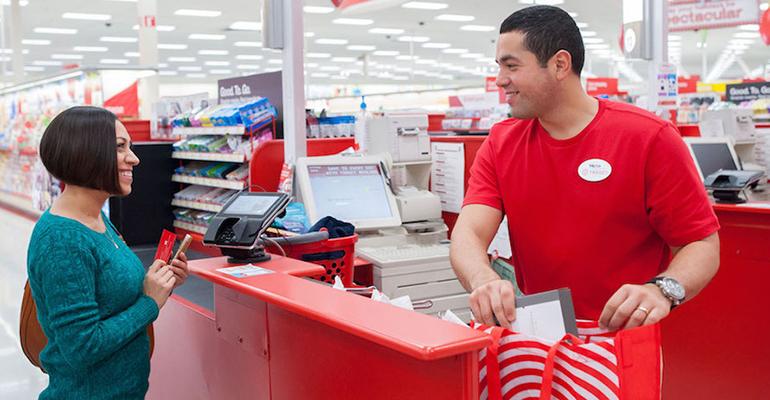 By the end of this month, about 60 Target stores in Boston, Chicago, New York, San Francisco and Washington, D.C., will give customers the option to select home delivery when making in-store purchases. The delivery, made during a two-hour window, carries a flat fee of $7. Oversized items, such as furniture, may include an additional $25 handling fee.

“When you live in a big city and rely on public transportation to get around, the prospect of lugging a case of sparkling water, new spring shoes and a new bedding set home on a packed train isn’t awesome. Any carless city dweller will tell you that,” Target said in announcing the service, adding, “No schlepping, no metro jostling. All that for the price of a short taxi ride.”

The service has been piloted at four New York City stores since last year and has drawn a strong response from customers, according to Target.

In-store signage and associates will alert customers if the service is available at their location. After completing the normal checkout process, shoppers tell the cashier they would like home delivery. Next, they choose the delivery time window, give their address and other necessary information and leave their purchases at the store. Drivers then retrieve their orders and deliver it during the designated time period.

“More than ever, we’re using our network of more than 1,800 stores and our enhanced supply chain operations and digital technologies to roll out more convenient shopping options for guests nationwide,” Target said.

That includes an expansion of Drive Up service, in which store associates load orders directly into the cars of customers waiting in designated parking spots. Target said Tuesday that Drive Up has now been made available at about 270 stores in Florida, Texas, Alabama, Georgia, Louisiana, Mississippi, Oklahoma and South Carolina. Plans call for Drive Up to be offered at almost 1,000 stores by the close of 2018.

Target added that it will be making same-day online deliveries through Shipt available nationwide by the end of the year. The latest expansion was announced Tuesday, when Shipt said that starting May 1 it will deliver a selection of groceries (including fresh food) and home essentials from Target stores and Associated Food Stores (AFS) supermarkets in Ogden, Provo and Salt Lake City, Utah.

AFS store banners offering the service will include Dick’s Market, Dan’s, Macey’s, Fresh Market and The Honey Bee Produce Company. Including the Target locations, 3 million households across Utah will get access to the Shipt service, with products delivered in as soon as an hour.