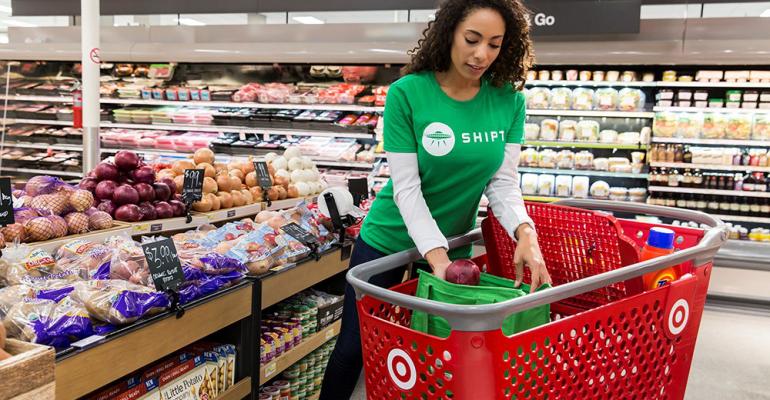 Target Corp.
Target plans to offer same-day delivery through its Shipt shopping and delivery service in most major markets by the end of the year.
News>Retail & Financial

Target Corp. is accelerating its investments in store remodels, small-store formats and other initiatives in 2018, boosting capital spending by $1 billion, company executives told analysts in a presentation on Tuesday.

The Minneapolis-based retailer said its latest remodels are driving sales gains of 2% to 4%, justifying the investment in a remodeling effort that will impact more than 300 stores this year. The company said it plans to spend about $3.5 billion in capital expenditures in 2018, compared with $2.5 billion in 2017.

On Monday Target unveiled plans to invest $250 million to remodel 28 stores in the Twin Cities market, saying it would incorporate many of the elements it has rolled out in its Los Angeles and Dallas market remodels.

The investments are eating into profit margins, however, and the retailer said it expects to generate a lower operating margin rate in the near term as it continues to increase its pay rate and upgrade its store base and supply chain to better accommodate its growing ecommerce business and improve the guest experience.

Brian Cornell, chairman and CEO, said the company’s mission was to make Target “America’s Easiest Place to Shop,” whether in-store or online. To that end, the company unveiled free, two-day shipping on hundreds of thousands of items and said it would seek to offer same-day delivery through Shipt, the concierge shopping and delivery service it acquired last year, in most major markets by the end of the year.

Shipt, which leverages a network of independent contract shoppers in the markets it serves, is now available to deliver from about 455 Target stores. In addition, Target said Shipt plans to continue to expand its partnerships with other retailers, which already include food retailers such as Costco Wholesale, Publix Super Markets, Meijer and H-E-B.

“Bringing all of those retailers together on one marketplace is incredibly powerful to bring consumers into the Shipt app,” said Cornell.

“2018 is about acceleration, leveraging our assets and leaning into our competitive strengths,” Cornell said.

The company said it is on pace or ahead of schedule on the initiatives the company laid out a year ago, which included investments in labor and in distribution systems that support its model of using its store network to fulfill e-commerce orders.

“Bottom line, shipping from our stores moves product faster and we do it at a significantly lower cost,” said John J. Mulligan, executive VP and chief operating officer.

Mulligan said the company is modernizing its supply chain with the goal of replenishing store inventories as items are sold, whether that replenishment comes by case, pallet or individual units.

“That might mean sending a truck with bottles of shampoo next to cases of ketchup and pallets of water,” said Mulligan. “We send the store precisely what it needs to restock the shelf. It keeps product from clogging up the back room and makes it easier for our teams to manage the inventory.”

Target has been testing the model at one distribution center in the Northeast, and the stores served by that DC have reduced their back back-room inventory by more than a third, and cut out-of-stocks to half the level that Target sees chainwide.

The company last year said it has had raised the starting wage for workers to $11, and on Tuesday said it would increase the starting wage to $12 beginning this spring. It maintains a goal of reaching a $15 per hour minimum wage by 2020.

The company said it saw a 30% spike in job applicants for seasonal positions after it announced the hike to $11 per hour last year. It also said raising wages has improved the quality of the candidate pool from which it hires.

At the same time, Target is also investing in distribution center automation and other technologies that will eliminate some labor needs, and, the company said, free up workers to focus on providing better customer service.

Although Target executives mentioned the retailer’s grocery offering briefly a few times during the presentation, the company did not detail any significant plans for its offering in that department, other than the ongoing rollout of same-day delivery through Shipt.

Comps up, margins down

The analyst meeting followed Target’s release of fourth-quarter results, in which it posted a 3.6% gain in comparable-store sales and a 3.2% increase in traffic for the three-month period that ended Feb. 3.

“Our team’s outstanding execution of Target’s strategic initiatives during the year delivered strong fourth-quarter traffic growth in our stores and digital channels, which drove healthy comparable sales in every one of our five core merchandise categories,” Cornell said in a statement.

The company’s investments in remodels and other initiatives have taken a toll on margins, however, and the company said it expects to report a reduced operating margin rate going forward.

The profits for the full year were slightly below analysts’ expectations, but comp-store sales and total sales both exceeded what analysts had projected.

Target said it expects comparable-store sales growth in the low single digits in the current first quarter and for the full fiscal year.