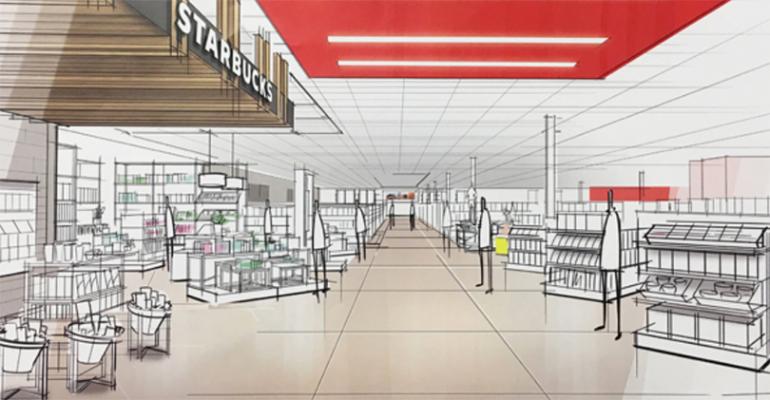 Images courtesy of Target Corp.
One entrance to Target's reimagined stores will “inspire” with displays of private brands and seasonal items.
News>Retail & Financial

Burt to execute a series of food strategies

Burt, who replaces Ann Dament, who left Target last November, will execute the retailer’s food and beverage strategy, which includes newly announced investments in the freshness, convenience, value and shopability of its food offerings.

“After an extensive search to find a new leader to join our team, I’m confident that Jeff is the right person for the change,” said Mark Tritton, Target’s EVP and chief merchandising officer, to whom Burt will report. “He’s an enthusiastic and passionate leader with the deep knowledge in food and beverage that Target needs to build on recent progress and drive future growth.” In a Target blog post, Burt (left) noted that retailers need to keep pace with consumers’ rapidly changing tastes. “With consumers ‘dashboard dining’ or eating meals all over the place, we need to have fresh, ready-made meals and the right assortment in place,” he said.

Target CEO Brian Cornell shared plans Monday, from ShopTalk in Las Vegas, for the retailer’s reimagined stores which will have two entrances, one that “inspires” with displays of private brands and seasonal items and a second emphasizing easy shopping, grab-and-go food, a wine and beer shop and quick online order pickup. The stores will offer grab-and-go items “plus everything you need for dinner.”

The first such location will open this October in Houston.

“With our next generation of store design, we’re investing to take the Target shopping experience to the next level by offering more elevated product presentations and a number of time-saving features,” he said. “The new design for this Houston store will provide the vision for the 500 reimagined stores planned for 2018 and 2019, with the goal of taking a customized approach to an enhanced shopping experience.”

The Kroger Co., meanwhile, announced that Joe Grieshaber, who had been serving as president of Kroger’s Columbus division, will succeed Burt as Fred Meyer president, effective immediately.

“Joe is known throughout the retail industry as an exceptional leader who always brings out the best in his people and teams,” Fred Morganthall, Kroger’s EVP of retail operations, said in a statement. “His depth of experience will help the Fred Meyer team build on their successes and continue to innovate and deliver a unique shopping experience for our customers.”

Grieshaber, who has served in a number of leadership roles at Kroger, has been with the retailer since 1983. In 2003, he was named GVP of perishables merchandising and procurement. He was promoted to president of Dillons in 2010 and named to president of the Columbus division in 2015.