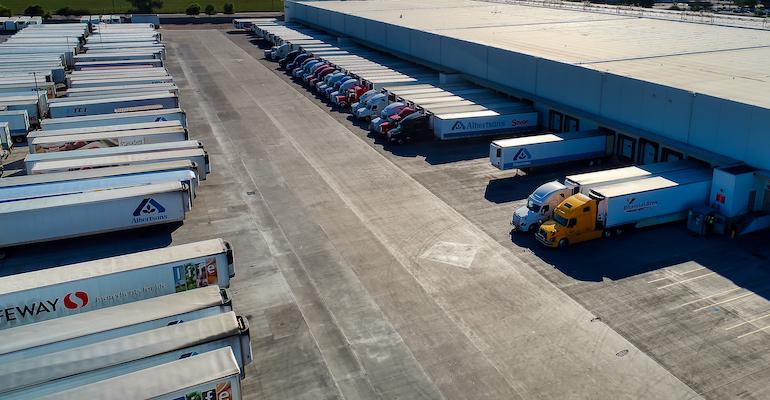 Albertsons Cos.
About 98% of 700 Teamsters Local 104 members at Albertsons' Tolleson DC voted to authorize a strike.
News>Retail & Financial

Phoenix-based Teamsters 104 said late yesterday that 98% of the 700-plus drivers and warehouse workers it represents at the Tolleson facility voted in favor of a strike. The action continues a dispute that early last month saw members hold a protest — described by the union as “just practicing picketing” — at the 900,000-square-foot DC.

Teamsters 104 claims Albertsons isn’t adhering to coronavirus safety guidelines at the Tolleson facility, including failing to provide drivers with face masks and hand sanitizer and not addressing warehouse workers’ concerns about social distancing.

“Albertsons is raking in record profits during the pandemic, while its frontline workers are putting themselves and their families at risk,” Russell Medigovich, a business agent at Teamsters Local 104, said in a statement. “It’s outrageous that these workers are being forced to supply their own personal protective equipment and being crowded in on top of each other in Albertsons’ warehouse.”

In an email statement on Friday, Boise, Idaho-based Albertsons said it would work with Teamsters 104 to address its members’ concerns at the Southwest DC.

Situated just outside of Phoenix, the warehouse serves about 175 stores, including Safeway in Arizona and New Mexico; Vons in Las Vegas; and Albertsons in Arizona, New Mexico, southern Utah, and El Paso, Texas.

“We value all our outstanding frontline associates who work at our distribution centers, manufacturing plants and stores, especially during these challenging times,” Albertsons said in the statement. “While we are disappointed that a strike vote was taken, we remain committed to bargaining an agreement with Teamsters Local 104 that rewards our team at the Tolleson distribution center.”

Teamsters 104 noted that the contract with Albertsons for member distribution workers at the Tolleson facility is slated to expire at midnight on Feb. 27.

“Striking is a last resort, but we have a responsibility to hold Albertsons accountable for refusing to honor the contributions of its frontline employees and exposing its workers to unnecessary COVID-19 safety risks,” commented Karla Schumann, secretary-treasurer of Teamsters Local 104.

The January protest at the Tolleson DC was held in tandem with another protest over COVID safety measures by Teamsters Local 745 drivers and spotters at Albertsons’ Southern DC near Dallas. That facility serves 78 Randalls, Tom Thumb and El Rancho Supermercado grocery stores.

Teamsters 104 also reported that, in Chicago, 900 distribution workers and drivers represented by Teamsters Local 710 are in contract talks with Albertsons’ Jewel-Osco supermarket chain. Their labor agreement expires on March 6.

“We are in touch with Albertsons Teamsters in both Phoenix and Dallas,” stated Mike Cales, secretary-treasurer of Teamsters 710.

According to Steve Vairma, warehouse division director for Teamsters and its international vice president, the union’s members have been “putting their lives at risk” amid the coronavirus crisis. “If Albertsons doesn’t stop putting our members at risk and violating federal labor laws in the process, we have over 11,000 Teamsters across the country that are ready to take on that fight,” he said in a statement.

While the Teamsters have expressed concerns about COVID protections at the DCs, Albertsons has implemented comprehensive safety measures at its stores, facilities and offices since the outbreak. The retailer’s COVID-19 safety efforts include plexiglass protection at checkout, in-store social distancing guidelines, stepped-up cleaning and sanitation procedures, and sick leave benefits for associates diagnosed with coronavirus or those who are required to self-quarantine.

Although discontinued, Albertsons also instituted an extra $2 per hour “appreciation pay” for frontline associates as well as offered part-time employment to displaced restaurant, foodservice and hospitality workers and pledged millions of dollars to help feed families in need. Most recently, in late November, Albertsons deployed a contactless temperature check and health screening solution for associates and vendors across its stores and facilities. The company said the technology provides a more reliable health-screening process.

In April, Albertsons also partnered with the United Food and Commercial Workers International (UFCW) union in a national drive to get grocery workers classified as emergency first responders during the pandemic.