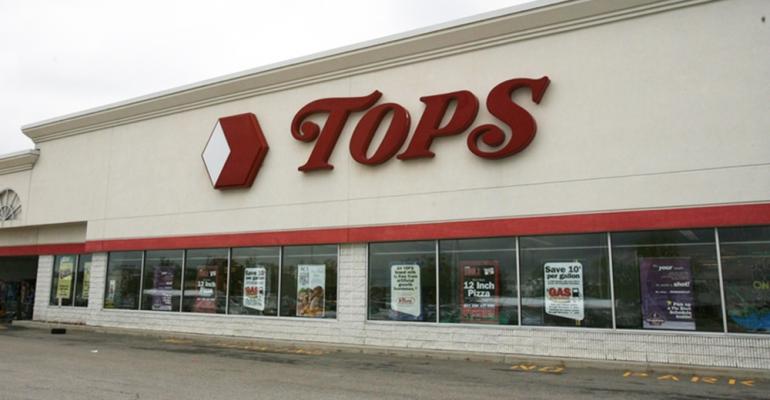 Tops Markets said it would step up promotions to drive top-line growth after slowing store traffic and effects of food deflation and reduced SNAP benefits contributed to a 3.4% comparable-store sales decline and larger losses for parent Tops Holding II during the fiscal first quarter.

In a release Tuesday, the Williamsville, N.Y.-based retailer highlighted the effect of acquired stores including six former Hannaford locations acquired in the Ahold Delhaize divestitures last year. Those sites contributed to higher overall sales in the period, and were moneymakers by the end of the quarter.

“Our first quarter certainly had its challenges and mirrored industry-wide trends. We were encouraged, however, as the bulk of the challenges hit during the beginning of the period. As we progressed through the quarter, we saw an improved trend in sales and profitability,” Frank Curci, Tops chairman and CEO, said. “Taking a closer look, we are seeing significantly improved performance in the six-store group that we acquired in August 2016, as promotional programs are taking hold and we better leverage our labor. Importantly, these combined locations contributed positively to our bottom line by the end of the quarter.”

Curci said Tops was “ramping up” promotions in the current period as it looks to drive additional top-line growth while keeping an eye on margins.

Sales for the 16-week period, which ended April 22, totaled $699 million, a 3.1% increase from the 2016 first quarter. Decreased federal funding for SNAP contributed to a 40-basis-point reduction in same-store sales, which were also impacted by lower store traffic and deflation in key categories like meat. Curci, however, said deflationary effects in some categories had stabilized by the end of the quarter.

Gross margin as a percent of sales was 29.3%, down from 30.1% in the same period last year. Tops said margins fell as a result of a sales mix shift toward lower-margin gasoline sales and that, excluding gas, margin was relatively flat and impacted by promotional activity around acquired stores.

Also negatively impacting results during the period was an increase in distribution costs due to a $1.1 million increase in self-insured workers’ compensation claims expense due to adverse warehouse claims activity, and a $500,000 increase in health and welfare expenses. Tops on Tuesday separately announced that it had promoted Edward Rick (left) to director, consumer marketing and retail. In this role Rick will oversee the development, implementation, and execution of consumer marketing and digital/interactive marketing programs including loyalty and targeted marketing initiatives. He will also oversee all of TOPS sponsorships and sports marketing efforts.

Rick most recently served as manager of consumer insights and analytics and has worked with Tops since 2008.