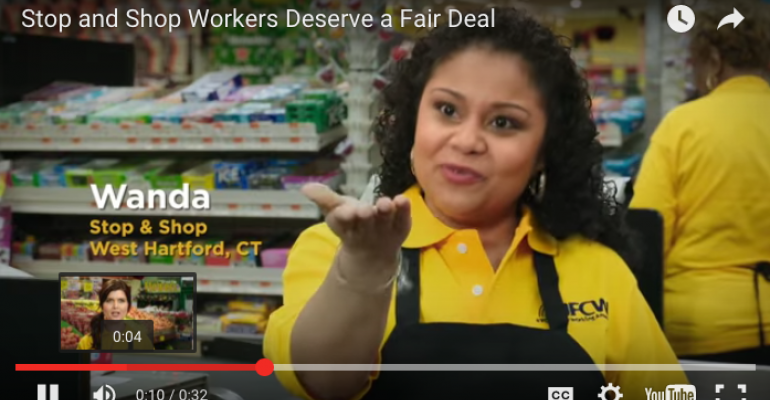 Contentious contract negotiations between Stop & Shop and union workers in New England have inspired what the United Food and Commercial Workers union called "a new degree of solidarity and cooperation among all of the local unions with Ahold members."

Stop & Shop, a division of Ahold, has been in negotiations with five UFCW locals since January on new contracts for workers in Connecticut, Massachusetts and Rhode Island but the sides had not reached agreement as of late Thursday. The contract covering those workers — whose local unions are negotiating jointly — expired in February.

This week, the UFCW announced that another seven local unions representing workers in New York, New Jersey and other areas in which Ahold operates stores had joined in the effort. All of those unions have contract negotiations scheduled to begin over the next 18 months beginning with Little Falls, N.J.-based UFCW 464A, which began talks with Stop & Shop's New York Metro division on Thursday. UFCW 464A pledged that it would not sign a contract "until Stop & Shop gives New England members a fair deal."

Stop & Shop New England, based in Quincy, Mass., in a statement said negotiations with New England workers resumed this week for the first time since March 23. It maintained its offer to union negotiators "provides substantial additional compensation to every associate, maintains excellent health care plans for eligible associates, and provides an industry-leading pension benefit that far exceeds what associates could find elsewhere."

"Your employer’s latest proposal last night created additional questions," the message added. "It is impossible for us to consider and/or agree to their proposals, let alone respond, if we do not understand the intent of the company’s desires."

In a message earlier this week, Espinosa also said Stop & Shop was proposing to reduce pay rates for newer full-time hires but that some tentative agreements had been reached on other issues.