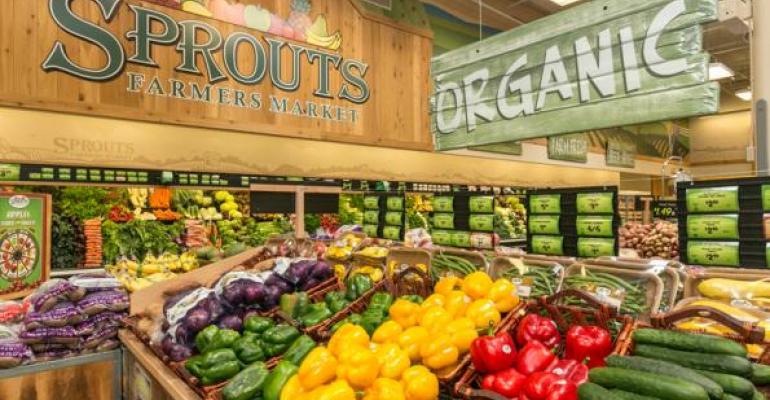 In his first quarterly report since being named CEO of Sprouts Farmers Market, Amin Maredia shared robust sales and earnings news — and a plan to step up investments to ensure that momentum can continue.

“Our management team and I are laser-focused on keeping Sprouts an innovator in the natural and organic sector, becoming even more relevant to our customers in their healthy living journey and positioning us to maintain a leadership position in this industry for years to come,” Maredia told analysts Thursday. “And we believe investing even further when we have momentum is the right thing to do for Sprouts.”

Maredia, Sprouts’ former CFO, was named CEO in August, succeeding Doug Sanders, who was named executive chairman of the Phoenix-based natural foods retailer. While reviewing Sprouts’ quarterly financial results Thursday, Maredia upped sales guidance for the fiscal year but said earnings and EBITDA in the “mid-term” — a period he later defined as two to three years — would likely be lower than historic norms as the chain invests in technology and in labor.

The chain will also look to better analyze customer data coming from forthcoming out-of-store and digital engagement efforts, he added.

Other investments include plans for a labor management system intended to help scheduling, along with service training and wage raises supporting fresh departments and entry-level workers with an eye on improving retention and creating competitive advantages in fresh.

Maredia stressed the wage investments would be “surgical” in nature and “not a peanut butter spread” like the across-the-board wage increases announced by companies like Walmart and Target earlier this year.

Sprouts also announced a $150 million stock repurchase authorization, which some analysts suggested would offset a portion of the investments.

Announced only hours after natural/organic rival Whole Foods Market introduced a slate of initiatives intended to reawaken slumping sales and remind shoppers of its quality standards, Sprouts’ results — quarterly sales growth of 18% and comps of 5.8% in what Maredia called a “zero inflation” market — provided a contrast that seemed to affirm its solid positioning behind fresh food at sharp prices.

When asked by an analyst how investors should view Sprouts’ margin strength given the questions facing Whole Foods, Maredia said supermarkets were Sprouts’ primary competitors. “For us, what's important is continuing to focus on sales drivers. Margin management is obviously important, but not at the expense of losing traffic or sale drivers. And we've been able to successfully do that as you've seen this quarter.”

Jim Nielsen, Sprouts' president and COO, added that continued expansion of private-label items would also support margins. Sprouts now carries more than 1,700 private label SKUs and expects to add 200 new SKUs this year and 300 next year. “We're going to break the $300 million mark in private label this year which is about 80% increase over the last three years in top line sales,” he said.

Karen Short, an analyst with Deutsche Bank, in a note to clients called Sprouts’ approach to its investments “prudent” and “refreshing.”

“[Sprouts] is investing from a position of strength to maintain its lead,” Short said. “It is refreshing to see a [management] team choose more moderate, but sustainable, EPS growth vs. a faster growth rate that could lead to over-earning. … We are highly confident that SFM will be able to deliver on its targets.”