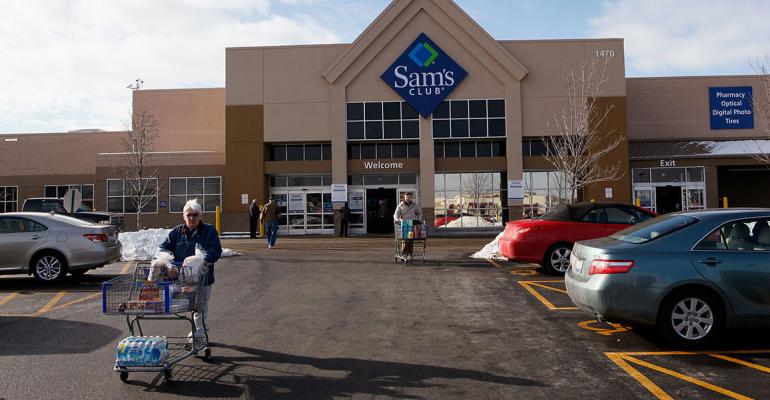 Wal-Mart Stores on Thursday reported a U.S. comparable-store sales increase of 0.6% in its fiscal fourth quarter — and that it expected similarly modest comp gains for the new fiscal year.

For the quarter which ended Jan. 31, overall sales of $128.7 billion decreased by 1.5% and was slightly below analyst expectations. Excluding one-time impacts related to a recent round of store closures, earnings per share of $1.49 were slightly ahead of consensus estimates.

The company said comps at Supercenters were positive for a sixth consecutive quarter and Neighborhood Market stores delivered a 7% comp, but that sales at Sam's Club were slow, particularly in food. Grocery saw positive comp sales in the quarter led by increased consumable sales, despite significant price deflation effecting meat and dairy, particularly at Sam's Club, officials said.

The company continued its "Win in Fresh" initiative, testing 11 new layouts, while improving in-stocks and reducing waste, McMillon said. "We still have work to do in our fresh area, and many things we want to accomplish in the upcoming year, but we remain on track."

Net sales at Sam's Club decreased by 0.1% and comps fell by 0.5%, as that format struggled with food price deflation and changing assortments, Sam's Club CEO Rosalind Brewer said. "As we continue to expand our private brand, generate more newness, and reallocate space, [fresh and dry grocery] are gaining member acceptance but will take careful handling and coordination."

Operating income was down by 5.3% as costs for ongoing investments in higher associate pay rates and e-commerce offset a 0.7% improvement in gross margin, McMillon said.

Walmart's e-commerce sales increased by about 8% during the quarter — a figure below company expectations. Walmart.com CEO Neil Ashe said the company was encouraged by customer acceptance of online grocery offering, which has expanded to 20 markets and will see additional expansion this year.

The effect of 269 store closures announced in January and expected impact of a strengthening U.S. dollar, tempered the company's sales outlook for the fiscal year, officials said. Although Walmart said in October it expected sales growth of 3% to 4% annually over the next three years, the revised forecast calls for flat sales in fiscal 2017 and U.S. comp growth of around 0.5%.