Walmart
At the top line, Walmart projected higher Q2 sales and noted that it's encouraged by the back-to-school season so far.
News>Retail & Financial

Citing the impact of inflation on the company and consumers, Walmart is reining in its earnings and sales outlook for the fiscal 2023 second quarter and full year.

After yesterday’s market close, Walmart announced that it expects adjusted earnings per share (EPS) to decrease by 8% to 9% for the second quarter and by 11% to 13% (10% to 12% excluding divestitures) for fiscal 2023. That was down from a 1% EPS decline (flat excluding divestitures) for the full year and EPS of flat to up slightly for Q2 in Walmart’s previous guidance in mid-May, when the company reported first-quarter results and lowered its outlook from February for both periods.

Operating income is expected to fall by 13% to 14% in the fiscal 2023 second quarter and by 11% to 13% (10% to 12% excluding divestitures) for the full year, in constant currency. Previously, Walmart had projected operating income to be flat to up slightly for the quarter and dip 1% in constant currency (flat excluding divestitures) for all of fiscal 2023. 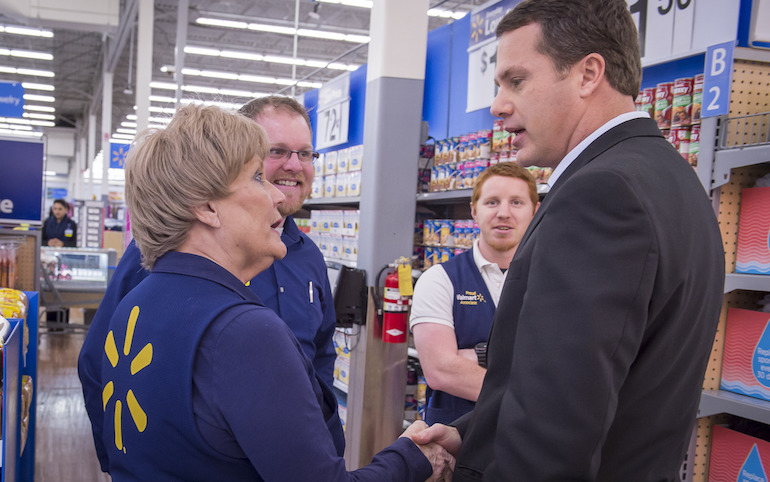 The outlook is brighter at the top line, in part due to what’s shaping up to be a promising back-to-school season across the retail spectrum.

Looking ahead, Bentonville, Ark.-based Walmart expects overall net sales to climb by 7.5% in the fiscal 2023 second quarter and by 4.5% (5.5% excluding divestitures) for the full year, in constant currency. In May, the company had forecast consolidated net sales to rise by over 5% for Q2 and by about 4% (4.5% to 5% excluding divestitures) for the year, in constant currency.

“The increasing levels of food and fuel inflation are affecting how customers spend, and while we’ve made good progress clearing hardline categories, apparel in Walmart U.S. is requiring more markdown dollars,” Walmart President and CEO Doug McMillon said in a statement. “We’re now anticipating more pressure on general merchandise in the back half; however, we’re encouraged by the start we’re seeing on school supplies in Walmart U.S.”

Walmart said it projects U.S. comp sales to increase about 6% for the second quarter, higher than previously expected due to a heavier mix of food and consumables, which are experiencing double-digit inflation — higher than at the end of Q1 — and negatively affecting gross margin. Elevated prices lifted by inflation are impacting customers’ ability to spend on general merchandise and requiring more markdowns to move through the inventory, the retailer explained. 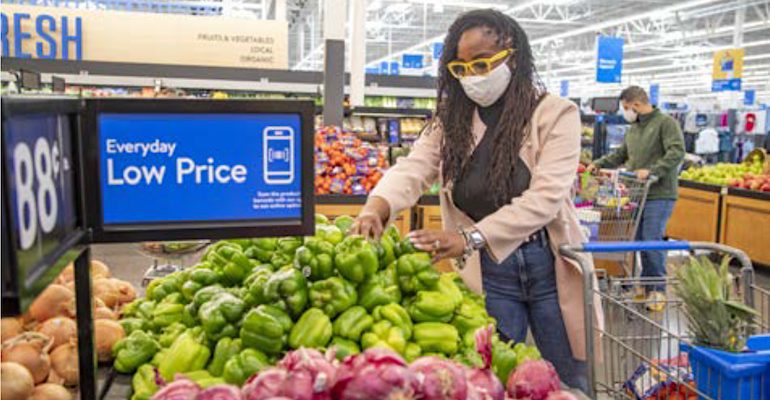 “On Monday night after the close, Walmart surprised the Street with an update on F2Q and F2023 expectations. Despite U.S. same-store sales for F2Q expected to come in around +6% (well above our previous 4.5% forecast) and guidance for F2H same-store sales maintained at +3%, Walmart is now seeing greater-than-expected gross margin pressures in its general merchandise business (particularly in apparel) that should continue through the balance of the year,” BofA Global Research analyst Robert Ohmes wrote in a research note yesterday. “Walmart now expects significantly lower gross margins for the rest of the year due to more markdowns and inventory cancellations in discretionary categories than previously expected, and a much higher mix of lower- margin food and consumables sales due to accelerating grocery inflation (now running double digits at Walmart) driving sales upside but cannibalizing sales of higher-margin discretionary sales.”

Walmart noted that during the second quarter it made progress in cutting down inventory and managing prices according to certain supply chain costs and inflation, as well as in reducing storage costs from a backlog of shipping containers.

On the plus side, Walmart said its continued market-share gains in grocery indicate that consumers are choosing to shop at its stores and digital properties during the current inflationary period.