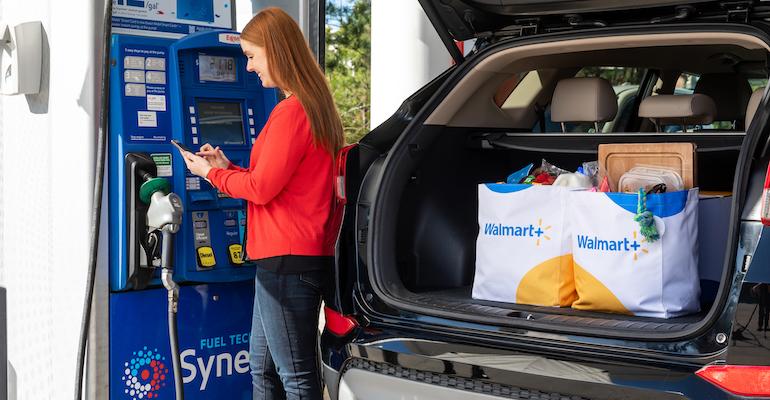 With gas prices now averaging over $4 per gallon, Walmart is offering members of its Walmart+ customer benefits program a bigger discount at the pump at more fuel stations.

Beginning April 27, Walmart+ subscribers will get an instant discount of up to 10 cents on each gallon of fuel they buy at participating gas stations, Walmart said. The Bentonville, Ark.-based retailer also has added 12,000 Exxon and Mobil stations to the Walmart+ fuel benefit, a more than sixfold increase that now makes the discount available at more than 14,000 stations in 48 states.

By expanding the fill-up footprint for the Walmart+ fuel benefit, more members will be able to take advantage of the savings, according to Chris Cracchiolo, senior vice president and general manager of Walmart+. At the time of the Walmart+ launch in mid-September 2020, the program offered gas discounts of up to 5 cents per gallon at about 2,000 Walmart, Murphy USA and Murphy Express fuel stations and was later expanded to Sam’s Club stations.

“Ninety-one percent of our customers are aware of the increased prices at the pump, and nearly half of those told us they are changing behaviors because of them. More access to a bigger discount will make a difference for our customers,” Cracchiolo said in a statement. “We want Walmart+ to help our customers save time and money, not only when shopping with us, but throughout their day. We’re excited to continue to find new ways to deliver for them.”

Besides gas discounts, Walmart+ offers members unlimited, free same-day grocery delivery from stores ($35 order minimum); free shipping (no order minimum) and an array of shopping tools such as Scan & Go contactless checkout (via the Walmart app) for $98 per year, or $12.95 a month. Other benefits include prescription drug savings, member-exclusive pricing and deals, and early access to promotions like Black Friday and new product releases. More recently, Walmart+ members became eligible for six months of the Spotify Premium music streaming service at no cost.

As of April 27, U.S. fuel prices averaged $4.13 per gallon nationally, compared with $2.89 a year earlier, according to AAA. The highest prices continue to be in the West (led by California at an average of $5.68 per gallon) and in the Northeast (led by New York at an average of $4.24 per gallon). The District of Columbia had an average price of $4.35 a gallon.

“We welcome Walmart+ members to Exxon and Mobil’s 12,000 plus stations across the country and look forward to giving them 10 cents off per gallon,” stated Bill Barenborg, U.S. marketing manager for ExxonMobil. “We know that families want to maximize their budgets and look forward to helping them do just that.”