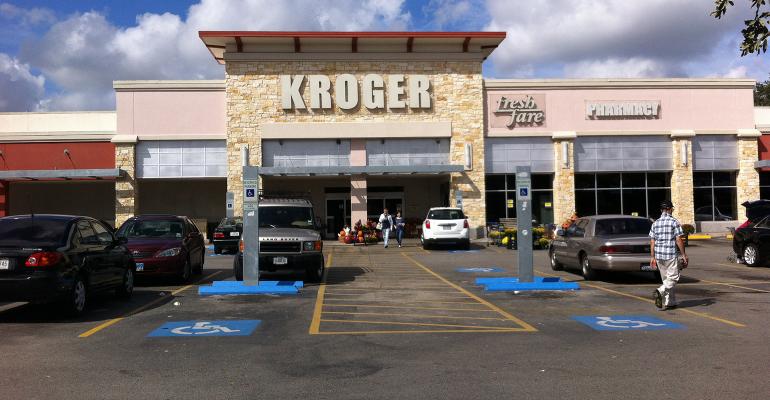 “In our view, the acceleration in Walmart grocery comps despite similar inflation sequentially implies strengthening market share gains, which could be challenging for Kroger,” said Kelly Bania, an analyst with BMO Capital Markets, in a research note previewing Kroger’s earnings.

Earlier this month Walmart surprised analysts by reporting comparable-store sales gains of 2.7%, including what it described as its best quarterly comp-store performance in food categories in six years. Food gains were particularly evident in fresh categories, where the company has focused on assortment and presentation.

Perhaps most concerning for Kroger is Walmart’s ongoing commitment to invest aggressively in pricing.

Karen Short, an analyst with Barclays Capital, said she believes Walmart’s price investments and improved execution, along with the growth of Aldi and Lidl, heightened competitive activity from conventional operators in the West, and Amazon’s increasing push for grocery market share are all combining to suppress food prices.

“It is possible Kroger experienced considerable sales and margin pressure in the quarter,” Short said in a report previewing Kroger’s earnings.

She said she suspects that Michigan and the Midwest are two of Kroger’s operating areas that were potentially impacted by Walmart’s price investments in the third quarter.

In addition, Whole Foods reported a 4.4% surge in sales in its fiscal fourth quarter, which ended in September, which could indicate that price investments from its new parent company, Amazon, are having an impact.

The analyst consensus is for Kroger to report identical-store sales gains of 0.9% in the third quarter, excluding fuel, but gross margins will be a key area of focus, analysts said.

Bill Kirk, an analyst with RBC Capital Markets, said he expects ID’s to be in line with the consensus, but cautioned that gross margins could be squeezed, despite the return of inflation.

He recently lowered his outlook for Kroger’s earnings per share to 41 cents, down from 43 cents previously. He maintains an “outperform” rating on the company’s stock, however.

In September, Kroger had projected ID sales growth of 0.5% to 1% for the second half of the fiscal year, excluding impact from Hurricanes Harvey and Irma, and said it expected its full-year operating margin to be down 30 to 40 basis points year-over-year, excluding fuel.

Short of Barclays Capital suggested that Kroger could benefit from several tailwinds, including momentum from its second-quarter return to positive IDs, excluding fuel, of 0.7%, higher fuel profitability and stock-up sales from the hurricanes.

Headwinds include potentially weak traffic trends (based on satellite data from RS Metrics), investments in labor and pricing and increased competitive intensity. In addition, Short noted that the industry doesn’t seem to be passing along cost inflation consistently, and that this pricing pressure increased over the course of the third quarter.

In its annual Analyst Day meeting last month, Kroger unveiled a sweeping initiative called Restock Kroger that calls for investments in store resets, an expansion of private label offerings and other tactics geared toward driving sales at existing stores. It is considering the sale of its convenience-store division and cutting back on new-store development.

Meanwhile the Wall Street Journal reported this week that Kroger had begun fining suppliers $500 for every delivery to its warehouse that was two or more days late. The move is an effort to recoup sales that have been lost due to out-of-stocks, the article said.

Walmart has similarly been cracking down on late deliveries, requiring that suppliers deliver within a tighter window or face penalties.

Suppliers are spending billions of dollars overhauling their supply chains, in part to improve service levels to retailers, according to the Wall Street Journal article.