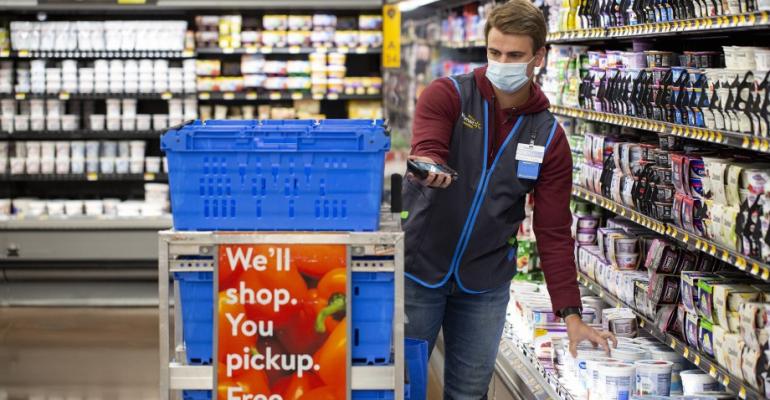 Citing “unprecedented demand” due to the COVID-10 outbreak, Walmart posted double-digit gains in U.S. net and comparable sales for its fiscal 2021 first quarter, with e-commerce sales skyrocketing from a surge in use of online pickup and delivery services.

Also on Tuesday, CEO Doug McMillon said Walmart plans to phase out the Jet.com e-commerce business it acquired for $3.3 billion 2016. Much of the Jet operation has since been absorbed by Walmart U.S. eCommerce, he noted.

Net income attributable to Walmart totaled $3.99 billion, or $1.40 per diluted share, compared with $3.84 billion, or $1.33 per share, a year ago. On an adjusted basis, diluted net earnings per share (EPS) were $1.18, excluding a net impact of 22 cents from the unrealized gains/losses on the company’s JD.com investments.

Analysts, on average, had projected adjusted EPS of $1.17, with estimates ranging from $1.09 to $1.38, according to Refinitiv/Thomson Reuters.

“I’m proud of what we’ve done as a company over the past several weeks. I’m really proud of how our people have stepped up. As we’ve supported associates and served customers and communities, we’ve also been able to effectively manage the business and continue to make progress against our long-term strategy,” McMillon told analysts in a conference call on Tuesday. “During this extraordinary period, we’ve continued our everyday-low-price discipline, and we continue to build trust with customers, some of whom are trying our products and services for the first time.” 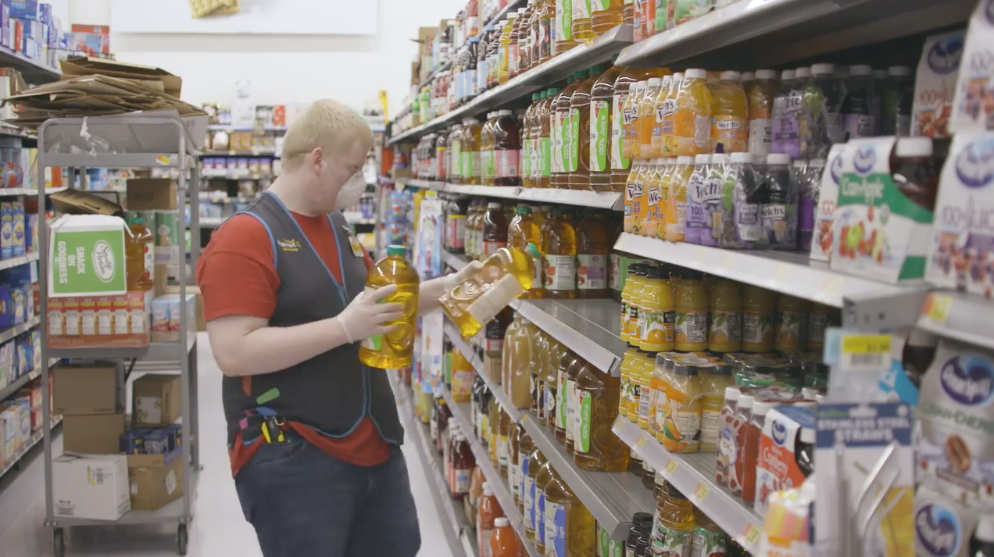 “I’m proud of what we’ve done as a company over the past several weeks," said Kroger CEO Doug McMillon. "I’m really proud of how our people have stepped up."

Walmart U.S. saw net sales climb 10.5% to $88.74 billion from $80.34 billion. Same-store sales jumped 10% year over year, excluding gasoline (+9.9% with fuel). While the number of transactions fell 5.6%, the average ticket size swelled 16.5% as consumers stocked up to shelter in place during the coronavirus pandemic. Operating income gained 3.9% to $4.3 billion.

“Despite strong ticket growth in sales in the first quarter, mix shifts negatively affected gross margin, and we incurred higher costs to operate,” McMillon said. “Our increasingly seamless omnichannel customer proposition is resonating. The strategy positioned the company well during this crisis, and we remain convinced that it will in the future.”

McMillon described three distinct phases in consumer demand as Americans responded to the spread of the virus since the first U.S. case was reported in late February.

“In the U.S., the first quarter started out as expected. But as the pandemic spread, we saw the mix of sales shift heavily toward food and consumables, as we had previously experienced in China. This was the first stock-up phase that we all saw so vividly. We experienced unprecedented demand in categories like paper goods, surface cleaners, and grocery staples. For many of these items, we were selling in two or three hours what we normally sell in two or three days,” he explained.

“As the quarter progressed, we saw a second phase related to entertaining and educating at home. Puzzles and video games took off. Parents became teachers. Adult bicycles started selling out, as parents started to join the kids. An overlapping trend then started emerging relating to DIY and home-related activities. Think games, home office, exercise equipment and the like,” McMillon said. “It was also clear a lot of people were taking a do-it-yourself approach as they bought items like bandanas and sewing machines to make masks. We could see customers looking to improve their indoor and outdoor living spaces. Our home categories in stores and online took off.

To help meet escalating demand, Walmart has brought in hundreds of thousands of extra hands during the crisis. “Since the middle of March, we’ve hired more than 235,000 associates in the United States, the majority on a temporary basis, to help relieve some of the burden faced by our associates in stores and supply chain facilities, as well as to help provide opportunities for people who have been displaced from their previous jobs,” said McMillon.

Also popping was Walmart’s online business. U.S. e-commerce sales in the first quarter soared 74% year over year at the top line and grew 3.9% on a comparable basis. McMillon attributed the online sales surge to rapid uptake of pickup and delivery services as many customers sought contactless purchasing options amid the pandemic. 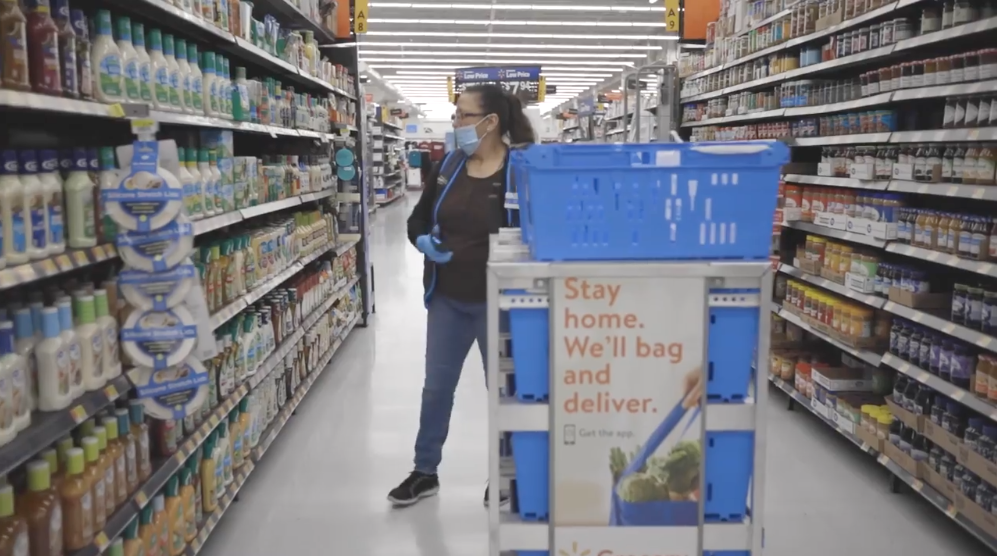 Walmart's online sales have surged with the rapid uptake of pickup and delivery services as many customers sought contactless purchasing options amid the pandemic.

“I think it’s time we stop referring to our Supercenter pickup and delivery capability as online grocery, because it’s becoming much more than grocery,” McMillon added. “Walmart.com also saw a surge in demand during the quarter as customers opted for greater convenience and increased social distancing,” he said. “Growth in marketplace outpaced the overall business, even as first-party sales were strong.”

In the U.S., Walmart is now temporarily fulfilling orders placed on Walmart.com through about 2,500 stores, according to McMillon. And the new two-hour, fee-based Express Delivery service, launched at the start of May, is slated to be expanded from nearly 1,000 stores now to around 2,000 stores by the end of June, he noted.

The accelerated evolution of Walmart’s U.S. e-commerce operation has led the company to shelve Jet.com, McMillon told analysts. Last June, Walmart said it would incorporate Jet’s operations into its broader e-commerce business. That announcement was followed in November with the closing of Jet’s fresh grocery delivery service in New York City.

“One decision we’ve made is to discontinue Jet.com. While the brand name may still be used in the future, our resources people and financials have been dominated by the Walmart brand because it has so much traction,” he said. “We’re seeing the Walmart brand resonate regardless of income, geography or age.

“The Jet acquisition was critical to jump-starting the progress we’ve made the last few years,” McMillon noted. “Not only have we picked up traction with pickup and delivery, but our Walmart.com nonfood e-commerce growth accelerated after the arrival of [Jet.com founder and current Walmart U.S. eCommerce CEO] Marc [Lore] and the Jet team. He leaned into the Walmart brand quickly. We don’t anticipate a significant accounting charge due to this decision, and the vast majority of associates have previously been assigned to the Walmart brand.” 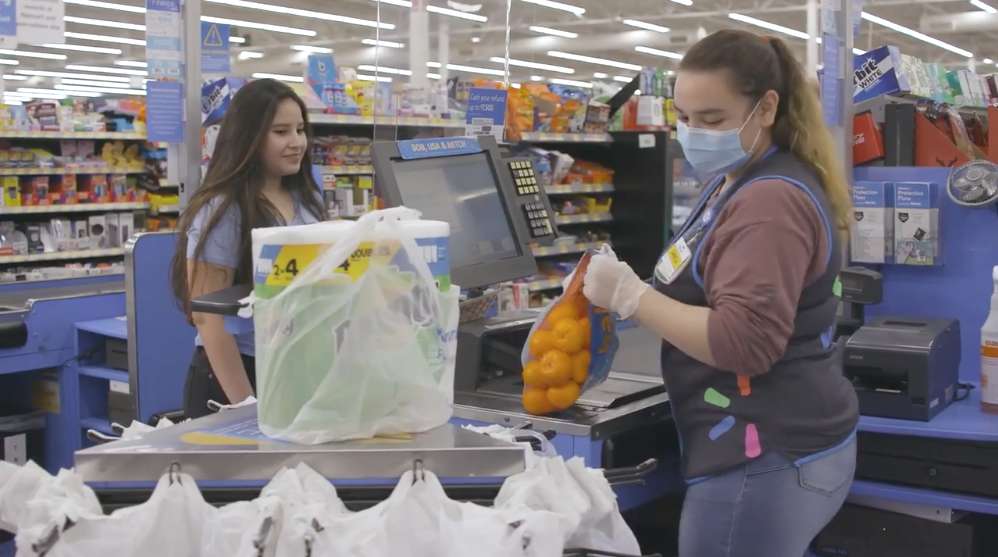 “Recall that all markets other than Canada are in a one-month reporting lag, so the crisis-related impacts will be more extensive in Q2 versus Q1,” Biggs noted. “As March and April progress, we saw economic pressure, channel shift and mix shifts in most of our markets.”

Walmart also said Tuesday that it was nixing its financial outlook for fiscal 2021 because of changing conditions surrounding the global pandemic. Before Walmart reported its first-quarter results, analysts had forecast full-year adjusted EPS of $5.07, with projections running from $4.11 to $5.42, according to Refinitiv/Thomson Reuters.

“The decision to withdraw guidance reflects uncertainty around several key external variables and their potential impact on our business and the global economy, including the duration and intensity of the COVID-19 health crisis, the length and impact of stay-at-home orders, the scale and duration of economic stimulus, employment trends and consumer confidence,” Biggs said. “The uncertainty stems from some variables that can impact performance in either direction.”

“Our business fundamentals are strong. Our financial position is excellent, and I’m confident in our ability to perform well in almost any environment,” Biggs added. “While the short-term environment will be challenging, we’re positioned well for long-term success and increasingly omni-world. We’re seeing uplift from stimulus spending in the U.S. and expect that to continue through some part of Q2. So there are tailwinds that will help us gain customer loyalty and market share over this time.”