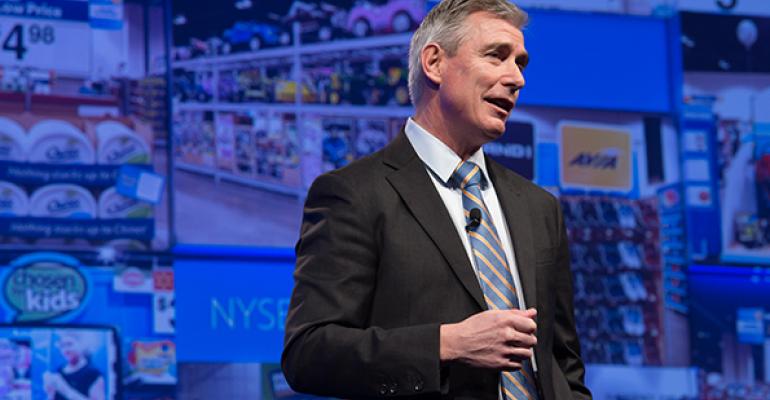 In his first public remarks since taking charge of Wal-Mart Stores’ U.S. business, Greg Foran said Wednesday, the retailer could turn around flat sales at U.S. stores in part by better execution of basics like store conditions and customer service.

Foran, who replaced Bill Simon as Walmart’s U.S. CEO in August, demonstrated a merchant’s mindset in remarks during Walmart’s annual investor day meetings, saying he intended to address details down to the coloring on the edges of iceberg lettuce in stores in an effort to improve comparable store sales behind quality and a better shopping experience.

He said that improving in what he termed “moments of truth” — for example, whether a shopping cart’s wheels are in working condition, whether a store is appropriately merchandised for the season and whether checkout is fast and friendly — could begin to make a difference in sales.

Foran also cast a critical eye on costs, saying the company needed to tighten inventories, address stores where costs are out of line and improve processes and disciplines around how the company handles damaged items and returns. Action in these areas — which he called “urgent agenda items” — will help to offset a portion of higher costs for wages and healthcare.

Work to improve in-stock conditions at stores have been “slight but not enough to be noticed,” while Walmart must also look at pricing and on ways to continue to improve its fresh offering, he added. Describing himself as “a fresh food guy,” Foran noted that even Walmart’s most loyal customers devote just 40% of their weekly spend on fresh items at Walmart.

Foran’s message was aligned with comments from Walmart’s CEO Doug McMillon, who has also spoken of improving performance through better merchandising since taking the reins earlier this year.

In remarks Wednesday, McMillon said Walmart would look to improve on “key customer dimensions” of price, assortment, experience and access as part of an enterprise-wide approach informed by how ecommerce is changing the customer. Walmart accordingly is reassessing its approach to capital spending, he said, with plans to devote a greater mix of its overall spend to growth opportunities in digital while reducing spending in traditional areas — particularly new stores.

The company expects to open 60 to 70 Supercenters including conversions and relocations in fiscal 2016 — down from 120 this year and 130 in fiscal 2014, Judith McKenna, the company’s EVP and chief development officer said. Rollout of smaller Neighborhood Market stores will continue at a pace slightly ahead of this year, she added, with 180 to 200 new stores being planned. Around 170 will open this year. The company in the meantime will slow plans to grow the 12,000-square foot Express format, which is in the process of rebranding under the Neighborhood Market banner, she said. Around 70 Express stores were set to open this year and 20 are planned for fiscal 2016, but none after that.

Concurrent with the banner change, these small stores will see assortments change, with fewer housewares and general merchandise replaced by fresh foods and consumables.

Updating additional initiatives, McKenna said the company’s experiment of using larger stores as mini-warehouses serving nearby smaller stores — a process the company called “tethering” — has been abandoned, saying the practice was too complex and not sustainable financially. Walmart is the meantime is rebranding its “Site to Store” offering allowing customers to order online for pickup at local stores as under the new brand Walmart Pickup.