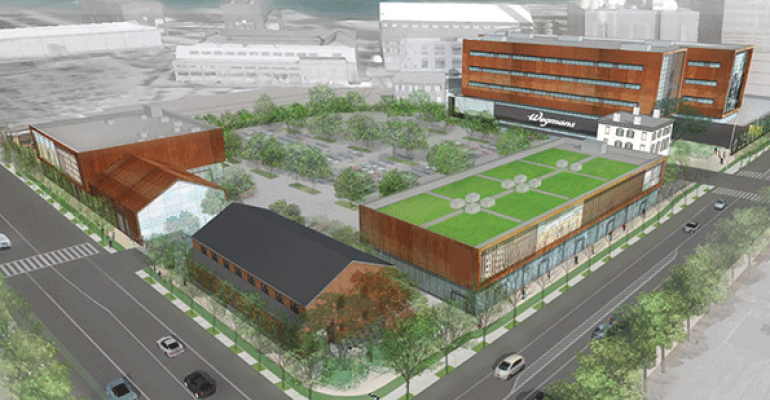 Wegmans Food Markets has been selected as an anchor tenant for a $140 million development at the Brooklyn Navy Yard, a move that will bring the Rochester, N.Y.-based fresh supermarket chain to New York City for the first time, officials said Wednesday.

Construction of the project — which will require the demolition of several existing buildings among the Navy Yard’s Admiral Row — will begin later this year. The 74,000-square-foot supermarket is expected to open in 2018, according to the Brooklyn Navy Yard Development Corp., the quasi-government agency overseeing development at the former military shipbuilding facility.

The Navy Yard, where shipbuilding roots date back to the Civil War, was decommissioned nearly 50 years ago and given to industrial development. It borders the East River between the Manhattan and Williamsburg bridges and abuts residential neighborhoods of Williamsburg, Downtown Brooklyn, Fort Greene and Clinton Hill. The new project will be developed by Steiner NYC, which operates film studios at the same site.

According to developers, Wegmans was selected over competing proposals because it would provide twice as many supermarket jobs and as many as three times as many full-time positions offered by proposals vying for the site. Wegmans also compensates employees as well as or better than competitors in their markets, said David Ehrenberg, president and CEO of BNYDC.

Navy Yard officials five years ago granted a proposal to Wakefern Food Corp. member Glass Gardens to build a 55,000-square-foot ShopRite store at the same site, but that proposal was scuttled when its developer was indicted on bribery charges (the charges were eventually dismissed). It was not immediately clear whether ShopRite had submitted a second proposal to build at the site. Sources said Wegmans was selected among four proposals, all of which included a supermarket anchor.

“The Brooklyn Navy Yard is proud to deliver on its promise to bring a supermarket to this neighborhood,” BNYDC president and CEO David Ehrenberg said in a statement. “But not just any grocery store. Wegmans is widely recognized as the country’s best supermarket for its affordable, quality food and is also recognized as the best retail employer in the country.”

The store will create a shopping destination surrounding diverse residential neighborhoods including Hasidic and wealthy populations of Williamsburg and the nearby Farragut, Walt Whitman and Ingersoll housing projects. It would be built less than a mile from the site of a Whole Foods currently under construction in Williamsburg.

“It is a thrill to bring Wegmans to Brooklyn, along with hundreds of new jobs. Our family started this company in 1916, and we built our business by always putting the needs of our employees first,” Wegmans CEO Danny Wegman said in a statement. “Our employees are part of our family, and they are the reason for our success. We are proud to be part of this exciting project and look forward to providing the very best quality and selection, consistent low prices, and incredible customer service to the local and wider Brooklyn community.”

Wegmans said it would spend more than $2 million to recruit and train its workforce, and will utilize BNYDC’s Employment Center at BLDG 92 to recruit area residents for the jobs it will create. BNYDC’s local hiring plan includes collaboration with resident leaders from the local New York City Housing Authority buildings and other community stakeholders, and includes setting up employment centers in the nearby NYCHA developments. In addition, Wegmans has committed $150,000 over three years to collaborate with the Brooklyn Navy Yard Development Corporation on community programs.