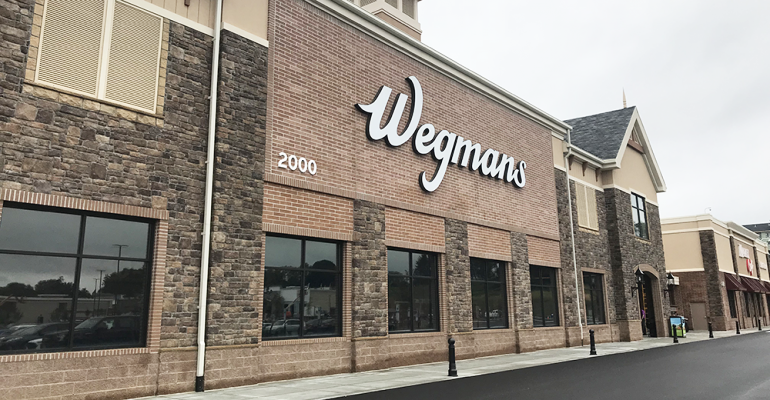 Wegmans
In the New York tristate area, Wegmans already has announced plans to open its first stores in Manhattan and Connecticut.
News>Retail & Financial

Rochester, N.Y.-based Wegmans said Monday that it has entered into an agreement to buy 8.5 acres of the 28-acre DSW Plaza from Prestige Properties & Development, which will continue to own and operate the rest of the shopping center. The 100,000-square-foot store will be located in the plaza at the corner of Middle County Road and Moriches Road.

Currently, no timetable has been set for the store’s construction and opening, Wegmans reported.

“We are delighted and proud Wegmans has chosen our DSW Plaza Shopping Center for their first location on Long Island,” Sam Shalem, chairman and CEO of New York-based Prestige Properties & Development, said in a statement. “Wegmans is a first-class asset and will be an incredible addition to Lake Grove and the surrounding communities. We look forward to partnering with Wegmans on this landmark location.”

Wegmans only recently has begun growing its presence in the lucrative metro New York market, which covers parts of New York, New Jersey and Connecticut. The company operated a store in Woodbridge Township, N.J., for years before entering New York City with the October 2019 opening of a 74,000-square-foot store at Brooklyn’s Navy Yard development. That was followed by a 121,000-square-foot store opened in August 2020 in Harrison, N.Y., in Westchester County north of Manhattan. And this past July, Wegmans unveiled plans to open its first Manhattan store in the second half of 2023. That store will occupy a former Kmart space at Astor Place in the East Village section.

Communities often lobby Wegmans to locate a store in their area, as the retailer’s supermarkets are widely considered a neighborhood asset.

“Wegmans will be such a positive addition to our village, as it will help rejuvenate all of the retail in the area. The company has a reputation that will bring folks near and far into Lake Grove to do their shopping,” Lake Grove Mayor Robert Scottaline stated. “We are so excited to welcome Wegmans to our beautiful village. We look forward to working together to make a positive impact in the community.”

Last month, Wegmans also announced plans to to open its first Connecticut location with a new store in Norwalk, which will bring the chain into its ninth state. A construction and opening time frame for the 95,000-square-foot, two-level supermarket is pending.

Currently, Wegmans operates 106 supermarkets in New York, Pennsylvania, New Jersey, Virginia, Maryland, Massachusetts and North Carolina. In October, Wegmans said it began hiring for its first store in Washington, D.C., an 84,000-square-foot location due to open this summer. Wegmans aims open two other new stores in 2022, including an 81,300-square-foot location this spring in Alexandria, Va., and a full-size store just outside Wilmington, Del. Other future stores listed on the Wegmans website include Rockville, Md.; Holly Springs, N.C.; Yardley, Pa.; and Reston, Va.