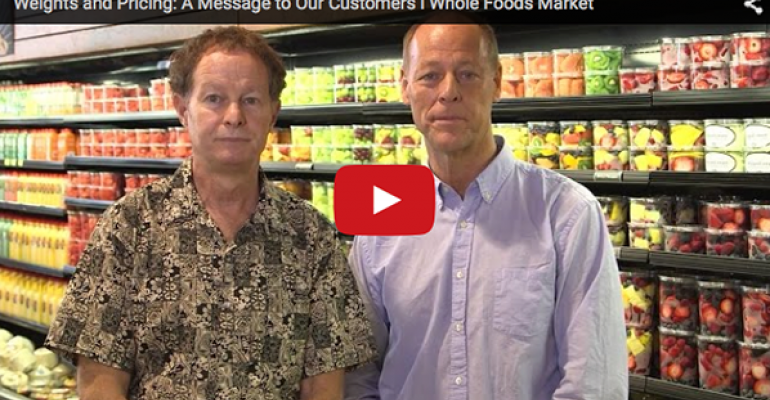 Whole Foods Market officials on Wednesday acknowledged that the chain had made “inadvertent” weighing and measuring errors at its New York City stores and detailed a plan to reduce those incidents including increased training, engaging a third party to monitor progress, and offering customers a free-item guarantee.

The chain however denied allegations of “systemic overcharging” as described by the city’s Department of Consumer Affairs. The DCA last week announced it was investigating Whole Foods after its audit found that 80 varieties of prepackaged products had mislabeled weights, and that 89% of those did not meet the federal standard for the maximum amount that an individual package can deviate from the actual weight.

“Any errors were unintentional, and any claim that we are 'sytematically overcharging’ customers is completely inaccurate,” Whole Foods contended in a blog post. “The New York DCA found errors that were not in favor of customers as well as errors that were benefitting customers. Even errors in customers’ favor are considered a violation.”

Whole Foods said “human error” was to blame for the discrepancies, noting that they most often occurred as a result of preparing fresh foods in stores. “This involves team members handling, weighing and labeling containers of products, such as with cut produce and fresh squeezed juices. This is who we are and how we deliver the freshest products to customers, but this also means there will be some unintentional human errors,” the company said.

Saying its goal was “zero mistakes” Whole Foods pledged Wednesday to increase training at stores and said it had implemented a companywide third-party auditing process for all stores. Additionally, a new refund policy stating that if customers think an item is priced incorrectly, they can ask the cashier to double check. “If it is, and not in the customer’s favor, we will refund the full price and give you the item free,” the company said.

Taking Sides: Is Whole Foods on the right track with its new store concept?
Jun 30, 2015