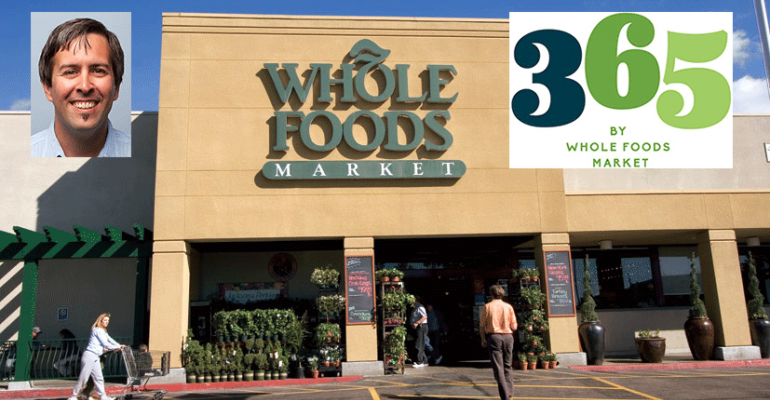 Whole Foods envisions its nascent ‘365’ concept as a means to bolster its market offering of healthy foods with the expectation that demand for them — and competition for their sales — will continue to grow, co-CEO Walter Robb said Thursday during an investor conference.

Earlier in the day, the Austin, Texas-based natural foods retailer announced the concept’s name and said it would begin to open the smaller, more value-focused units next year. Published reports Thursday said Whole Foods would open between five and 10 of the new stores next year.

Speaking at the William Blair Growth Stock Conference in Chicago, Robb said 365 would provide an alternative in sites where a traditional Whole Foods store wouldn’t work, but also could serve shoppers between visits to its flagship. That is a strategy not unlike Wal-Mart Stores has undertaken with its smaller Neighborhood Market format providing a midweek shopping alternative to its Supercenters.

“We could see a customer shopping on a Tuesday, Thursday at the 365, and on Saturday, think [the] richer or deeper experience [of] Whole Foods Market,” Robb said. “Think a little more convenient, curated [experience] at the 365. We think these two work really well together. We obviously see the other formats in the marketplace out there in a smaller size and say, there's no reason that we can't take ourselves into that and offer a customer a good alternative there.”

Jeff Turnas, who ran Whole Foods’ United Kingdom division prior to his appointment as president of 365, described a similar phenomenon in London.

“We’ve got a flagship store in Kensington and we've built a smaller 17,000-square-foot store in Piccadilly Circus. And what it did is, it added to the growth of the overall region because … we were more accessible to people that couldn't get to Kensington a couple of times a week and only used it on the weekend,” Turnas said, also at the Blair event Thursday. “So, I think the brand can be close to Whole Foods.”

Robb said the new format would be part of Whole Foods’ response to “tectonic shifts in the food marketplace” that have seen competitors close the gap on better quality food faster than Whole Foods had anticipated, slowing growth along with it.

“If we were slow in reading the marketplace correctly, and responding to and underestimating some of our competitors, we are not doing that now,” Robb said. “And I think that this effort today in introducing Jeff and our new format is our competitive response — our effort to say we've recognized the world is changing and we're going to try to do something about it by giving ourselves another opportunity to grow.”

Without revealing specific details, Robb said 365 would also utilize technology in service of shoppers and provide an experience he described as “fun, exciting, modern, streamlined, cool and convenient.”

The new store “will reflect a lot of new ideas around the integration of technology into the customer experience,” Robb said. “We'll reflect a more curated product selection. We'll look at a more streamlined cost model and labor model.

“But it's going to look not like what you see out there in the marketplace with respect to some of the other formats,” he added. “It's going to look something uniquely Whole Foods Market that blends our expertise in fresh food with some of these other areas.”