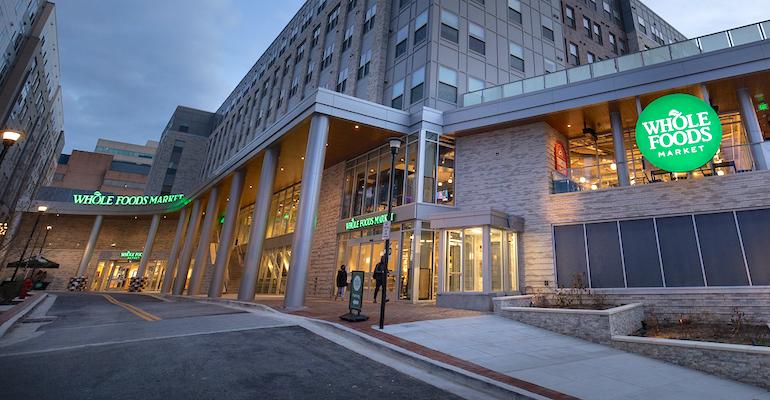 Whole Foods Market
Whole Foods also has continued to open new stores, including one of its first in 2022, a 59,119-square-foot store in Towson, Md.
News>Retail & Financial

Austin, Texas-based Whole Foods on Monday confirmed published reports that stores in Montgomery and Mobile, Ala.; the DePaul section of Chicago; Tarzana, Calif.; and Brookline, Mass., are slated to be shut on May 6. Another store, in Chicago’s Englewood neighborhood, is due to close in the coming months, a company spokesperson said.

“As we continue to position Whole Foods Market for long-term success, we regularly evaluate the performance and growth potential of each of our stores, and we have made the difficult decision to close six stores,” the Whole Foods spokesperson said in an email. “We are supporting impacted team members through this transition and expect that all interested, eligible team members will find positions at our other locations.” 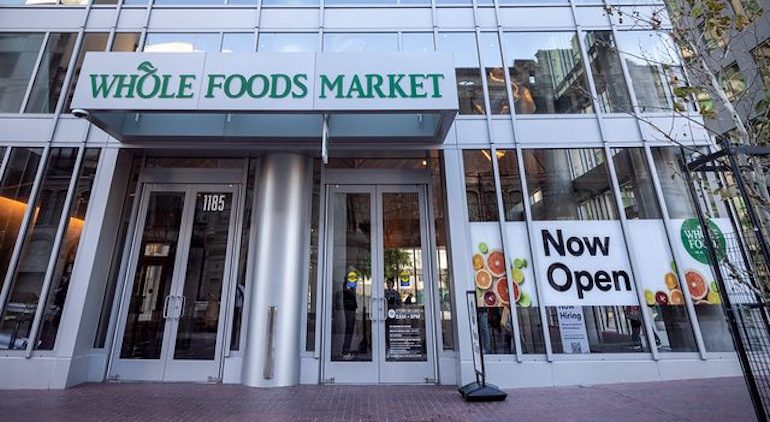 Related: Whole Foods’ Sherman Oaks store is in a California state of mind

The new District of Columbia and Sherman Oaks locations are the first Whole Foods stores to offer Amazon’s Just Walk Out technology. The platform automatically tracks customers’ product selections from shelves, keeps a running tally of the total and allows shoppers to complete their purchase as they exit, enabling them to skip the checkout line.

Also, after making its Whole Foods debut in Seattle a year ago, the Amazon One contactless payment system is now rolling out to the grocer’s stores in Austin, Texas.

Amazon said in late April that the Whole Foods store in the Shops of Arbor Trails shopping center in southwestern Austin now enables customers pay for their groceries by scanning their hand on the Amazon One palm reader at checkout. Plans call for Amazon One to be deployed at Whole Foods’ six other stores in the area, including four locations in Austin (downtown Austin, East Austin, Domain Northside and Gateway Shopping Centers) and one apiece Bee Cave and Cedar Park, Texas.

Overall, Whole Foods now operates 514 U.S. stores in 43 states, plus 14 locations in Canada and seven in the United Kingdom. 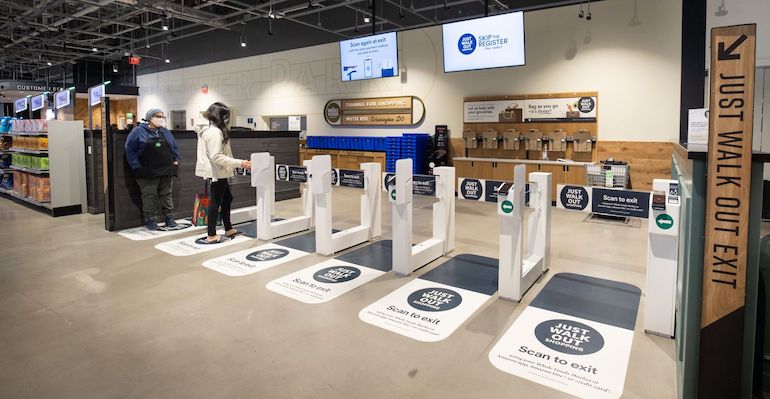 In reporting fiscal 2022 first-quarter results last week, Seattle-based Amazon said physical-store sales, most of which are from Whole Foods, rose 17.1% year over year to $4.59 billion. The Q1 uptick followed year-over-year gains of 16.6% in the 2021 fourth quarter, 13% in the third quarter and 11% in the second quarter but marked a sequential decline of nearly 2.1% after three straight quarter-to-quarter increases.

In early March, Amazon said it plans to close all of its bookstores, pop-up retail sites and shops carrying toys and home goods in the U.S. and U.K. When the company reported fourth-quarter 2021 results in early February, those U.S. locations included 24 Amazon Books stores, 33 Amazon 4-Star outlets and nine Amazon Pop-Up locations.

Still, Amazon has continued to expand its other brick-and-mortar banners. The company said it opened eight new Amazon Fresh grocery stores in the first quarter and now has 46 overall in the U.S. and U.K. The 30th Amazon Fresh location, a 35,000-square-foot store in Murrieta, Calif., is slated to open on May 5. Jeff Helbling, vice president of Amazon Fresh Stores, reported that new Amazon Fresh stores are planned for California, Illinois, Pennsylvania, Virginia, Washington state and New Jersey. The company also has begun hiring for an upcoming Amazon Fresh in Oceanside, N.Y., which would be the banner’s first location in New York.

Amazon, too, is eyeing a new brick-and-mortar retail category. In January, the company announced plans for its first-ever physical apparel store, called Amazon Style. The location is expected to open later this year at The Americana at Brand, a mixed-use development in Glendale, Calif.