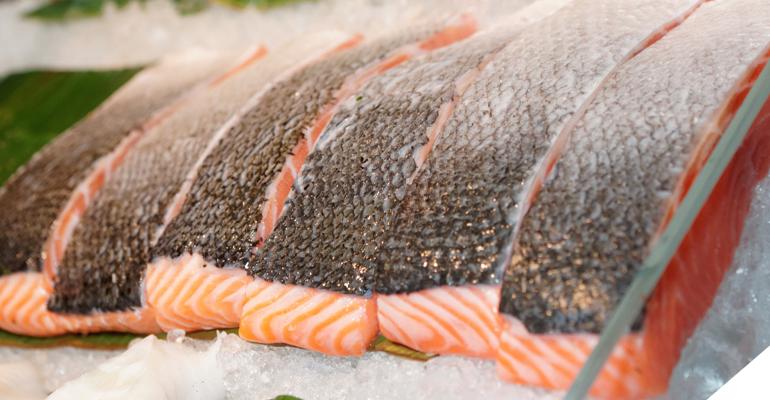 Study finds temperature control still a struggle for many vendors

Maintaining the freshness of shipped proteins such as seafood continues to be a struggle for a sizable portion of the delivery sector, a recent report found.

The study, conducted by Rutgers and Tennessee State Universities, investigated the freshness of home-delivered meal kits. Of the 684 items that the team ordered, about 47% arrived at temperatures too warm to warrant safe consumption.

“The problems that we observed in our study are things that could be relatively easily resolved with the right packaging materials and the right know-how,” said William Hallman, professor and chair of the department of human ecology at Rutgers.

Hallman, who helped lead the investigation, said the study examined 160 vendors and received the 680 items across 169 packages. Many of those packages arrived at an acceptable temperature.

“So it’s possible to ship safely,” said Hallman, who noted that proteins that were shipped frozen had a higher chance or arriving in good condition.

But the number of deviations raised concern, and Hallman noted that seafood in particular is “extremely perishable.”

Hallman explained that fish are trickier to ship than other proteins such as steak because fish filets tend to have varying thickness at different points. Thick centers often give way to thin edges on fish such as salmon, contrasting the generally uniform density of beefsteaks.

The result can be cuts of fish that are partially spoiled.

But Hallman’s team also found that even when proper precautions are taken to guarantee that suitable temperatures are maintained throughout the supply-chain, many companies drop the ball at the final step of delivery.

“Most of these companies don’t require you to sign for the package,” he said. Parcels containing fresh meats, including seafood, may be subject to waiting outside of a temperature-controlled environment for any stretch of time until the recipient arrives to collect the package.

Some meal kit providers posted on the packaging that items that were “cool-to-the-touch” were safe to eat, a safety-testing method Hammond labeled as “nonsense.”

Kanter said that it was essential for FreshDirect to offer clients the ability to “buy [seafood] online and have confidence that you’re going to get something that is as good as—if not better than—what you can choose from yourself.”

The company delivers groceries to customers throughout the greater New York metropolitan area, all of New Jersey, Philadelphia and Washington, D.C.

Seafood ordered through FreshDirect is kept in a controlled environment as it is shipped directly from the plant—which the company owns—directly to the delivery truck.

Kanter explains that the product benefits from not being put on display in a store because it remains “under pristine conditions” for the entirety of its shelf life.

“With this straight-line supply chain so to speak, we’re bringing that fish right from the docks,” said Kanter. “It could be coming from Nova Scotia or it could becoming from 50 miles here.”

Kanter compared this brief stretch to the time it would take a client to transport a selection of fish from the seafood counter at a traditional grocery store through checkout and to his or her car.

He admits that maintaining a cold environment throughout the delivery process can be challenging for smaller companies attempting to enter the game. FreshDriect began constructing its current supply chain 15 years ago.

“Starting small, we were allowed to learn over the course of many years what challenges can come up,” said Kanter, suggesting that there is little substitute for experience and trial and error.

With their operational procedures down, Kanter can coordinate the fresh delivery of a fish “that’s still swimming” in the wild for a week down the road.

Kenneth Wu, founder and CEO of Milk and Eggs, a grocery delivery service in Los Angeles, places an equal amount of importance on fortifying the supply chain.

“We go to great lengths to ensure food safety and it's very important both in meats and in perishable vegetables,” said Wu. “A break in the cold chain has dramatic impact on food safety.”

He also said that a short delivery time is crucial to minimizing spoilage risk.

“This is one of the toughest aspects of food delivery, especially when it involves long freight-related shipping like UPS and FedEx,” said Wu. “We've found the best way to circumvent this is to shorten the delivery time. Our current delivery window is one to two hours.”

Wu’s team packs meat and seafood in ice packs that are double the weight of the food portion being shipped. The items and the ice packs are contained in individual vacuum packages.

Wu says that this method “generally does a great job of keeping meat below 40°F and within food safety requirements.”

Tom Keegan, owner & operator of Keegan’s Seafood in Cincinnati, says that freshness for his product is among his top concerns.

“I pay hefty extra shipping charges to ensure that my seafood arrives at 39 degrees,” said Keegan. “This includes double the usual ice packs, (12 packed top and bottom), argon filled bubble wrap, heavy-duty plastic foil wrap, one inch Styrofoam, all enclosed in a foil-wrapped corrugated container. This attention to detail adds around $3.00 per pound to my seafood costs.”

The increase in overhead is worth the expense to Keegan, who says the investment extends the shelf life of his products by at least four days.

The importance of maintaining freshness when delivering meat product, especially seafood, is apparent. But the results of Hallman’s study show that this task remains a struggle. By the time the survey concluded, 73 of the researched retailers of meat and seafood out of 500 were no longer in business.