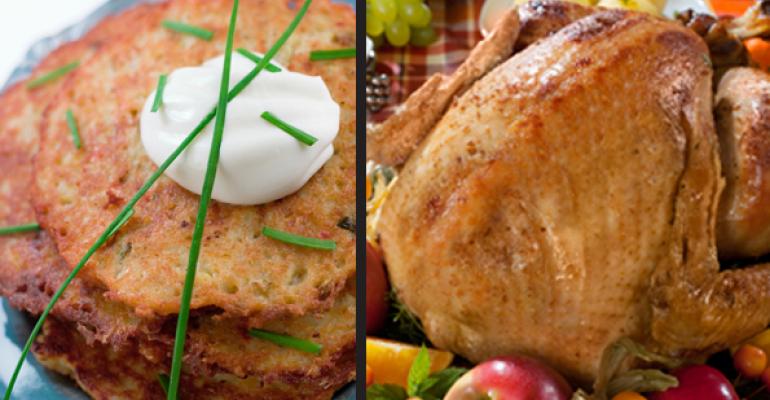 With Thanksgiving coinciding with the first day of Hanukkah this year, some retailers are offering special menus or promotions for the combined holiday many have dubbed “Thanksgivukkah.”

New York-based Fairway Market has created a Thanksgivukkah catering menu for 2013. The menu includes the staples of the November holiday, such as a turkey, gravy and cranberry sauce, as well as traditional Hanukkah foods like potato latkes and doughnuts.

The retailer will also host a special kosher version of its “Hosting the Holiday” Thanksgiving catering tasting event on Nov. 3 at its Paramus, N.J., Stamford, Conn., and Westbury, N.Y., stores.

An executive chef at Stew Leonard’s, Norwalk, Conn., has come up with a few recipes for those cooking their own Thanksgivukkah meals. He suggests making sweet potato latkes, honey glazed carrots and Jewish apple cake.

Jewish food manufacturer Manischewitz produced an ad campaign around Thanksgivukkah with recipes that include its products. Its Chanukah House vanilla cookie decorating kit is available at Duane Reade stores and on  Amazon.