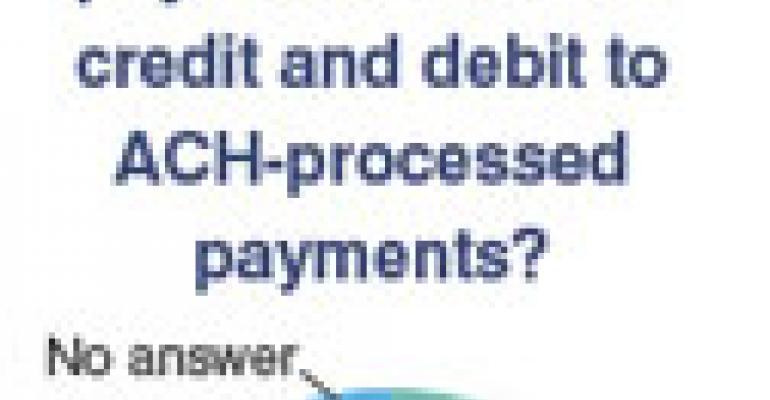 Another demand-based technology, price optimization, topped the list of applications that respondents said they would test or launch in 2008, with nearly one in four (24%) selecting it. Interest in price optimization surged in 2007 as pricing continued to grow more complex and competitive pressures made already slender margins harder to maintain.

Over the past few years, new price optimization vendors have emerged, notably KSS and Revionics, the latter catering specifically to the independent market. Last summer, optimization vendor DemandTec, with a large number of major retail customers, was able to go public with an initial public offering.

Self-checkout systems, which have already gained wide acceptance by food retailers in the past several years, continue to attract interest; a third of retail respondents (27% overall) said they tested or launched self-checkout lanes in 2007. Nearly one in five respondents (18%) plan to test or launch self-checkout this year.

Self-checkout vendors continue to upgrade these systems and make them easier to use. Fujitsu Transaction Solutions, for example, has introduced a self-checkout model that allows shoppers to use their reusable shopping bags instead of plastic bags, appealing to the growing environmental concern among shoppers.

Fuel marketing is another application tested or launched by a significant number of respondents last year (20%), including 27% of retailers. This application, which allows retailers to offer fuel discounts through in-store loyalty promotions, appeals to consumers seeking some price relief at the gas pumps.

Back-office check conversion, which became available last year, is being tested by a growing number of retailers. It allows retailers to feed consumer and other checks into a back-office scanner/imager that transmits check data through the ACH network while capturing an image of each check. Last year 12% of respondents said they tested or launched it, and 14% said they plan to test or launch it this year.

The ACH network also offers retailers an opportunity to reduce payment processing costs via store-sponsored debit cards or biometric payment technology. Asked whether their companies are trying to convert shoppers from using high-cost electronic payment vehicles like standard credit and debit cards to ACH-processed payments, 29% said yes, while 41% said it was under consideration.

While RFID technology continues to show promise in such applications as in-store promotion compliance and reusable produce containers, its adoption among most retailers and wholesalers remains limited. Just 8% of respondents said they were piloting RFID technology incorporating the EPC (Electronic Product Code), though nearly half of those not testing RFID said they expected to do so by 2010.

Sponsored Content
Retailers only know half of the customer
Jul 17, 2019

Sales of health, wellness-related products on the rise
Apr 03, 2019